Abductor Virgins is a Boss in Elden Ring. Abductor Virgins are both deadly constructs found in Volcano Manor. This is an optional boss as players do not have to defeat it to advance to the Legacy Dungeon. The two versions equip either Wheels or Swinging Sickles

Mechanical constructs with various bladed weapons used to slay any who get in their path. The real horror lies underneath their iron frame, as it can quickly grab and take you within to meet your doom.

The Abductor Virgins can be found in Volcano Manor. To get there, you need to be abducted by the one at the bottom of Raya Lucaria Academy. Let it grab you and take you inside it. Work your way through until you found a site of grace called subterranean Inquistion Chamber from there jump facing east running over 2 poles floating in lava. You will then come to a dead end, go forward and the floor will collapse. There you will find a mist wall with the Abductor Virgins.

Alternatively, Abductor Virgins can be reached from inside the Manor. From the Temple of Eiglay Grace, walk down the front stairs (W), past the Fire Monk, and turn left SE. From there, follow the curved section of the broken edge to a corpse hanging over the side. Look down and you should see a rocky platform far below you. Carefully drop down to the ledge below by walking North from the corpse's position, you will lose some health from the fall. From there, drop down a series of ledges and go through the tunnel, dropping down onto some bats. Continue East without crossing the lava to find a cave with a half buried cage in front of it. After a series of bats, ledges, and lava slugs, you'll come to an open cavern with two platforms connected by stairs and the Subterranean Inquisition Chamber Grace.

From the Subterrranean Inquisition Chamber Grace, go South, following the pillar fallen in the lava. After a small tunnel there is a small open area with a pit trap in it. The only way out is SE, which gets you to a yellow fog wall with the field boss behind it.

If you get stuck you can always get out by resting at the site of grace (Subterranean Inquisition Chamber) and opening your map while resting allowing you to fast travel.

The Best Tips for Abductor Virgins:

Due to there being two Abductor Virgins in the boss arena, the use of spirit ashes/ multiplayer summons is recommended, as splitting them apart makes the fight significantly easier. The wheel abductor should be killed first, due to its higher mobility and stronger move set. Additionally, the scythe abductor is easier to dodge in the 2 vs. 1 that the wheel version, so he should be your priority. Be careful not to get stuck on any things in the arena or give them an opportunity to both pin you at the same time.

Attacking the abductors from behind is a good strategy as it prevents them from easier opening and grabbing you, which deals huge amounts of damage possibly outright killing the player. However, attacking an open abductor from the front deals additional damage, providing you are willing to take the risk. The idea is to bait one of them at a time towards you focusing on clearing one at a time as well. Most attacks can also be blocked with a shield when you are overwhelmed. If you manage to keep avoiding, reposition behind to get a few combo hits in order to stagger them.

Because of the arena size and the fact that there are double of them, ranged combat is not recommended however should you choose to deal with them in ranged combat, having a spirit summon will help a lot to split up the duo in order to focus on clearing one at a time. Like the melee strategy, ideally clear the wheel variant because of its shorter range and limited moveset. You will need to keep circling around the arena in order to not get caught in a corner and have them both trap you to the edge. Be mindful of the objects that could also get you stuck in this location.

If using spells, use Glintstone Shard for quick attacks. Keep dodging back and circling around for a better angle and use your ranged attack in between each of his dealt attacks. Dodge away from any dashes.

It is possible to cheese this boss by standing on a ledge on top of a rock formation. From where you enter the boss arena, go toward the right and there should be a ledge high up that you could jump up to using other rocks. From here, the bosses have difficulty hitting you. The sickle abductor virgin can still hit you with a long throw, but such attack is easily dodged. From the ledge, you can fire away ranged attack such as sorcery or projectiles. 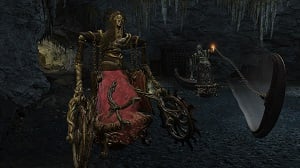