She is an optional boss as players don't need to defeat her to advance in Elden Ring. Like her fellow Black Knife Assassins, she is swift and aggressive, closing distance with ease. Her weapon is imbued with Death, allowing it to drain and reduce her targets’ maximum HP for a short while. You may find yourself dodging and running most of the time during the fight. Be patient and punish her long recovery moves such as Imbued Helmsplitter. She drops the Black Knife Tiche Ashes when defeated.

The assassins who carried out the deed were scions of the Eternal City. A group entirely of women, arrayed in armour of silver under cloaks which fooled the eye.

Alecto, Black Knife Ringleader is a Field Boss found in Liurnia of the Lakes. [Map Link]

Alecto, Black Knife Ringleader can be found at Ringleader's Evergaol in Liurnia of the Lakes. You cannot access this area until you've progressed Ranni's quest significantly.

Dodge and Punish: Dodge, duck, dive, and dip is the strategy here. You simply cannot block her attacks as they are too quick and deadly, and Barricade Shield is useless, so you must dodge. Try to keep enough distance that you can run away as soon as you see her winding up Imbued Helmsplitter, which can easily one-shot you if it hits. Keep dodging until she does Helmsplitter or Knife Sweep, and punish her while she's recovering. These are your best openings to attack safely unless you're wielding a large enough weapon to stun her. Helmsplitter is also good opportunity to get a backstab, but note that the bowl-like nature of the arena means that there's a very small chance your backstab won't connect due to elevation differences. You can safely heal instead of punishing a slow attack, or just after dodging a Blade of Death.

Glintblade Criticals: You can use the Ash of War: Glintblade Phalanx to greatly increase pressure on her Poise. Unassisted, it can take four casts to get her staggered, but you can speed this up a lot by getting your own hits in as well. Keep in mind that she can sometimes collide with some of your Glintblades before they launch and then get get knocked back out of stagger once the rest fire. She'll recover quickly, so don't close in for a punish if this happens.

Poke Her To Death: Strength builds can make good use of weapons with a fast jab attack (like the Greatsword's crouching/rolling light attack) to punish her while she's closing in for an attack. If you manage to stun her with the first attack, follow up with a second light attack - if she rolls away, stop swinging and back away while your stamina recharges.

Parries and Backstabs: Most of Alecto's melee attacks are parriable.  Take some runs to focus on observing her movesets and get accustomised to the speed of the fight. Quality & Dex builds can use a weapon with high critical damage (the Misericode is a good choice). Equip the Dagger Talisman for a damage boosts and/or the Assassin's Crimson Dagger for HP regain.  Equip a shield with the Golden Parry Ash of War to extend the parry range, or use the Carian Retaliation Ash of War on a small shield to parry the Death-Imbued Flame projectiles for some extra damage.  Many of the Twist Sweep attacks and Jump attack (no flame) can be easily outrun and allow you to go in for backstabs. If you misread a combo or missed a parry earlier in her attack chain, roll to iframe next attacks and wait for the next opportunity.

Rolling into her with the Briar set on will easily stuns/interrupts her attacks.

Critical Hits: This is a formidable boss which often requires lots of HP and FP, so it's recommended to have at minimum 25 Vigor, 20 Mind, and 10-12 flasks. For Sorcery users, it's best to use multi-hit spells with homing capabilities such as Glintblade Phalanx or Carian Phalanx. These fire-and-forget spells allow you to focus on dodging Alecto's swift and powerful attacks. You can use Ash of War: Glintblade Phalanx on your weapon for quick access. Maintain your distance and wait for openings and breaks between her attacks to cast your spells and then prepare to dodge her upcoming onslaught. While these spells are not particularly damaging to Alecto, they deal massive damage to her Poise, allowing you to get a critical attack in. Keep up this strategy throughout the whole fight and you should be able to bring her down.

Sweeping Attacks: When Alecto is far away from you, she's much more likely to close in than to stand back. She has incredible mobility but low poise. She leaps from side to side and will easily dodge most magic projectiles such as Glinstone Shard or Stars. These leaps can't evade spells with broad sweeping arcs such as Carian Greatsword or Adula's Moonblade, though. As she starts closing in, time your cast to catch her right as she reaches melee range. This will stun her and interrupt her attack. Keep casting over and over, stun-locking her until you knock her on her back. This will buy you time to sprint away, use FP flasks, or prime Glintblade or Carian Phalanx (as above). She'll often leap far back after being knocked down, so just wait until she closes in again to repeat the process.

Night and Flame: Wielding Sword of Night and Flame, back away from her along the rim of the bowl to avoid most of her chain attack combos and physical attacks (as long as you don't run out of stamina). You can use Night and Flame Stance's Night Comet attack after she does a Helmsplitter. This will usually knock her onto her back, allowing you to repeat the process. Be careful that you're back in Night and Flame Stance before you attack again or you'll start swinging your sword and potentially chop your way into her knives. If you miss, back off to regain stamina and FP. Be careful to avoid Imbued Helmsplitter, but that's fairly easy to dodge to the side if you're at a distance.

Alecto moves too fast for most ranged weapons to be able to handle her. Some jump attacks with a bow may connect safely but it will be a slow and unreliable source of damage.

If you find yourself incapable of dealing with Alecto's attack pattern you can essentially break her AI by standing on a specific rock in the evergaol arena. As soon as she spawns in jump onto the rock located directly to the left of her. She will be unable to reach you unless she paths her way around to the left side of the rock. She can also occasionally use her Helmsplitter moves to get on top of the rock, in which case you should simply lead her off of the rock and then get back on it as quickly as possible.

To effectively and safely deal damage to her while using this strategy you should use ranged weapons and/or long-reaching melee weapons such as spears and thrusting swords to poke her from a distance. If these weapons don't work for your build, you can also use jumping heavy attacks with the melee weapon of your choice and retreat back onto the rock while she recovers.

Be aware that Alecto's Blade of Death can still sometimes hit you while you are on top of the rock. Also avoid the hole behind the rock against the wall of the Evergaol: not only will you fall off the map and die, this death will spawn you at your last site of grace instead of the Stake of Marika.

Incantation users can utilize Black Flame Ritual spell, which will chip away her health while providing protection against her attacks (as it breaks her attacks). 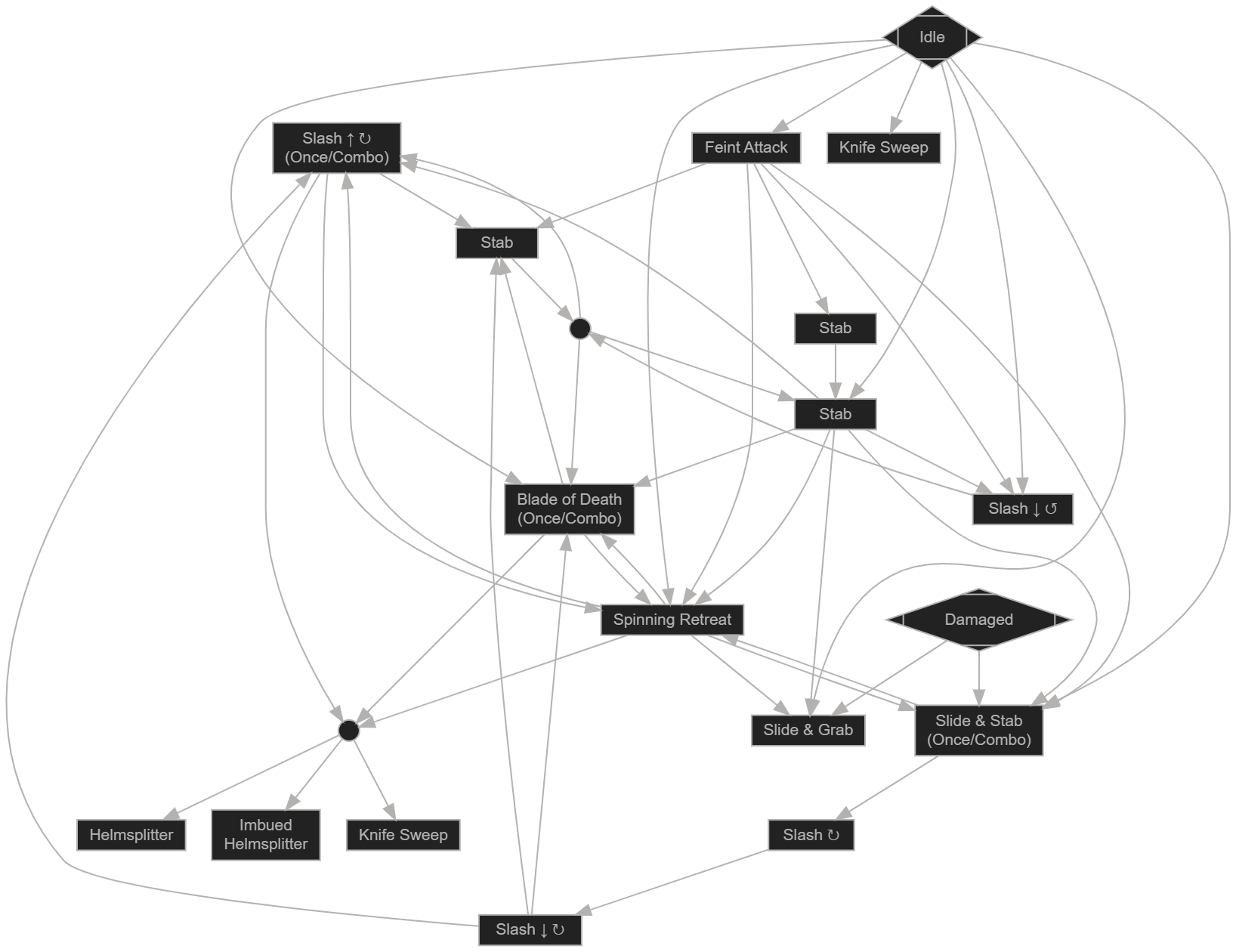 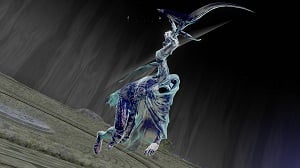