These long-lived warriors, clad in biting, freezing winds, are said to have been the mortal enemies of the Fire Giants since time immemorial.

Ancient Hero of Zamor is a Boss found in several locations.

Ancient Hero of Zamor bosses can be found in the following locations:

The Best Tips for Ancient Hero of Zamor:

As a melee user, you will need to use hit and run tactics for the first phase. Depending on what type of weapon you are using, if you run at them while they are spawning you can get up to four hits in before they dodge away, although they can do a spin attack instead on the fourth hit. Get a few attacks in after getting in close, then dodge away quickly, maybe you could also get a jump attack in once while the enemy is still in animation. Be wary of their Chilling Attack, as soon as you see the animation where they kneel, run towards your right and circle around him to get in a few hits, if you’re too far away it’s better to just dodge the attack completely as you won’t reach them in time.

They will enter the second phase once you get his health to about 60%, you’ll see them back away and kneel to the ground, you can get a few hits in once they’re still in animation. They will then cover their armament with frost. During this phase, they are a lot more aggressive and a lot of attacks closes the gap quickly even if you maintain your distance. They will also use AoE attacks during this phase so be ready to dodge roll and run away at any moment. In this phase, if they kneel they can cause a whirlwind frost AoE explosion while also still using their frost breath that covers the ground.  Keep in mind that this boss is parry-able, so if you got your parry game, you should get the upper hand for the second phase.

For magic and ranged users, the first phase will be easier for you compared to melee users, as you can just stand back, cast spells/incantations or shoot bows/bolts, then dodge when he closes in. He is weak to Magic, Fire, and Lightning, so keep that in mind when crafting bows or bolts for your range build. It is still recommended for you to either have a shield if you’re good at parrying, or high enough endurance to dodge away repeatedly when he closes in and attacks. 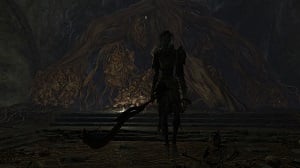 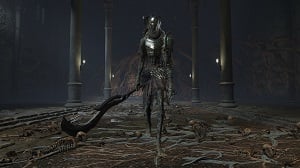