Astel, Stars of Darkness is a giant insectoid creature found in Yelough Anix Tunnel in the Consecrated Snowfield. This Astel is not to be confused with Astel, Naturalborn of the Void, a Legend-type boss found in the Lake of Rot. Astel shares some possible connection with the Fallingstar Beasts being outer beings born from the void.

This is an optional boss, as players don't need to defeat it in order to advance in Elden Ring. However, doing so yields useful Items and Runes. Make sure you are decently levelled before facing this boss or it's grab attacks will one-shot you. The arena you fight it in is much smaller than that of the Astel in the Lake of Rot, so be wary when trying to avoid its attacks. Astel, Stars of Darkness drops the Meteorite of Astel when defeated.

Astel, Stars of Darkness is an Field Boss found in Yelough Anix Tunnel in Consecrated Snowfield.

Consecrated Snowfield: Astel, Stars of Darkness can be found by at the end of Yelough Anix Tunnel. [Elden Ring Map Link]

The Best Tips for Astel, Stars of Darkness:

Stay out of the exploding clouds, and attack the head with Jump Attacks when there is an opening. Avoid attacking too frequently, as Astel can quickly chain together attacks. It is recommended to stay close to the head, as the bite attacks can be easily dodged. But one must be wary of the Gravity Wave attacks he does when one is under him for too long

Don't underestimate the tail attack, as it has a very long range and it may one-shot you if you don't dodge. Astel has limited ranged options, opting to use a long ranged attack or its tail to hit you from afar. Keep an out for when it teleports,  if you don't spot it anywhere, it may have teleported above you, getting ready for an extremely powerful grab attack.

Most of its attacks are identical to the Remembrance version. See the Astel, Naturalborn of the Void page for more information. 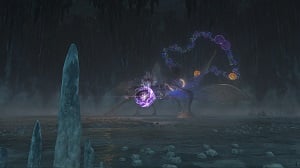