Attacking is a Combat mechanic in Elden Ring. It's the most basic way of doing damage to enemies, but it has many nuances that can be learned to improve your skills and conquer ever greater challenges. 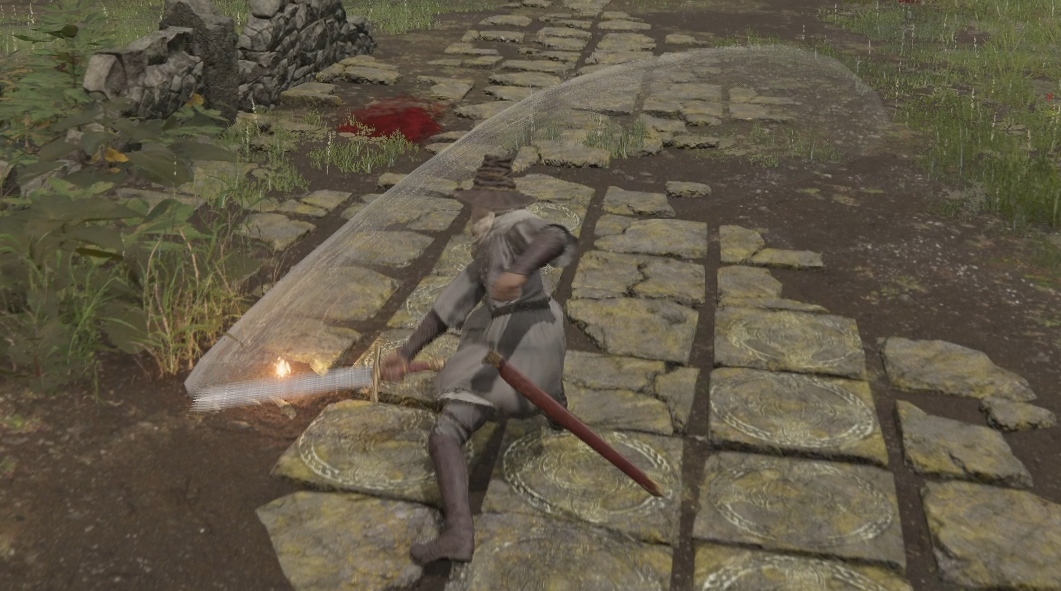 Every weapon has two basic attacks that can be performed without any other inputs. For Glintstone Staves and Sacred Seals, the light attack instead casts your currently-selected Spell.

Light attacks are faster and cost less stamina, but in exchange they do less damage. Heavy attacks are stronger, but they're slower and cost more stamina. For most weapons, heavy attacks can be "charged" by holding down the button, and a fully-charged heavy attack is often the best way to maximize damage in a single hit. Which attack you use when depends on how big an opening your enemy gives you: a quick enemy may only give you time for a light attack in between their moves, but after you dodge a slower enemy's attack you could have time for a fully-charged heavy attack. 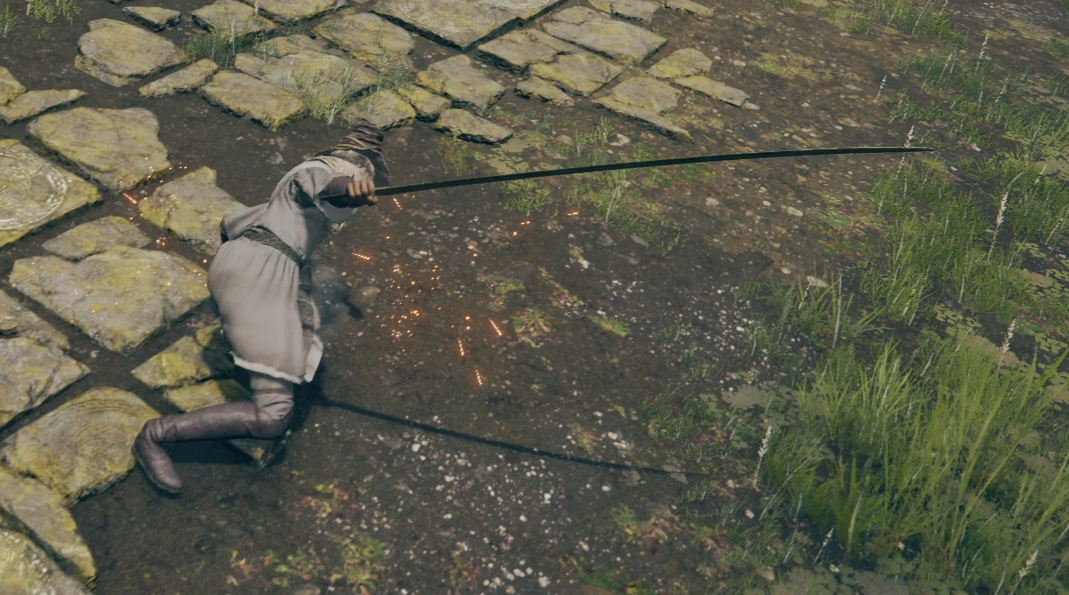 When you attack multiple times in rapid succession, you perform an "attack chain" (sometimes called a "combo") with special animations for subsequent attacks. While the details of depend on which weapon you're using, later attacks in the chain are often faster than the first attack, and the final attack often deals extra damage. Lighter enemies can be staggered repeatedly by each hit of an attack chain, leaving them unable to counterattack before they die. Be careful when chaining attacks on heavier enemies, though: once you're far enough into an attack animation you can't dodge or guard, and they may be able to stagger you with their counterattacks instead.

Combos can be improved with: 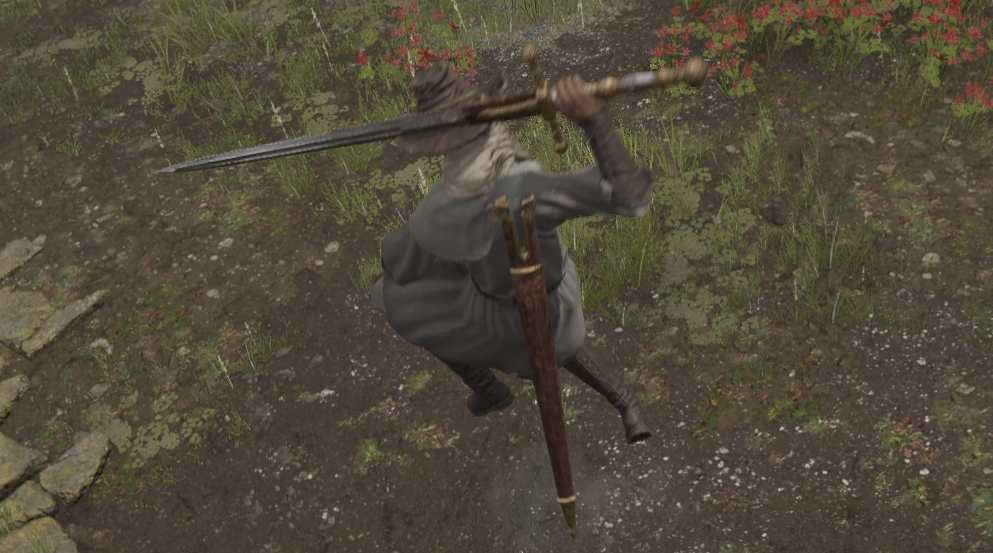 If you attack while you're in the air, you can execute a jump attack. This combines with various other types of attack in three ways:

However, there are some downsides. You're much more likely to be staggered if you're hit while you're in the air and you'll be vulnerable for a short time after you land. Jump attacks also can't be used as part of a combo, so they're less valuable for weapons that attack quickly but do less damage with each hit.

Jump attacks can be improved with:

Immediately after guarding an incoming attack with a Shield, press Heavy Attack to do a special counterattack.

Guard counters are very powerful. They're much faster than typical heavy attacks and they do a tremendous amount of Stance/Poise damage—comparable to a fully-charged heavy attack! They can be  tricky to set up though, requiring that you have enough stamina to withstand the incoming blow and then attack back, and enough in reserve to retreat to safety afterwards. You're also vulnerable to attacks while you're guard countering, so be careful to only do it when the enemy has stopped attacking.

Guard counters can be improved with:

Counterattack is attacking an enemy with Pierce Damage while they are in the middle of attack animation.

Players and enemies take 30% extra Pierce Damage while in the middle of attack animation.

Counterattacks can be improved with: 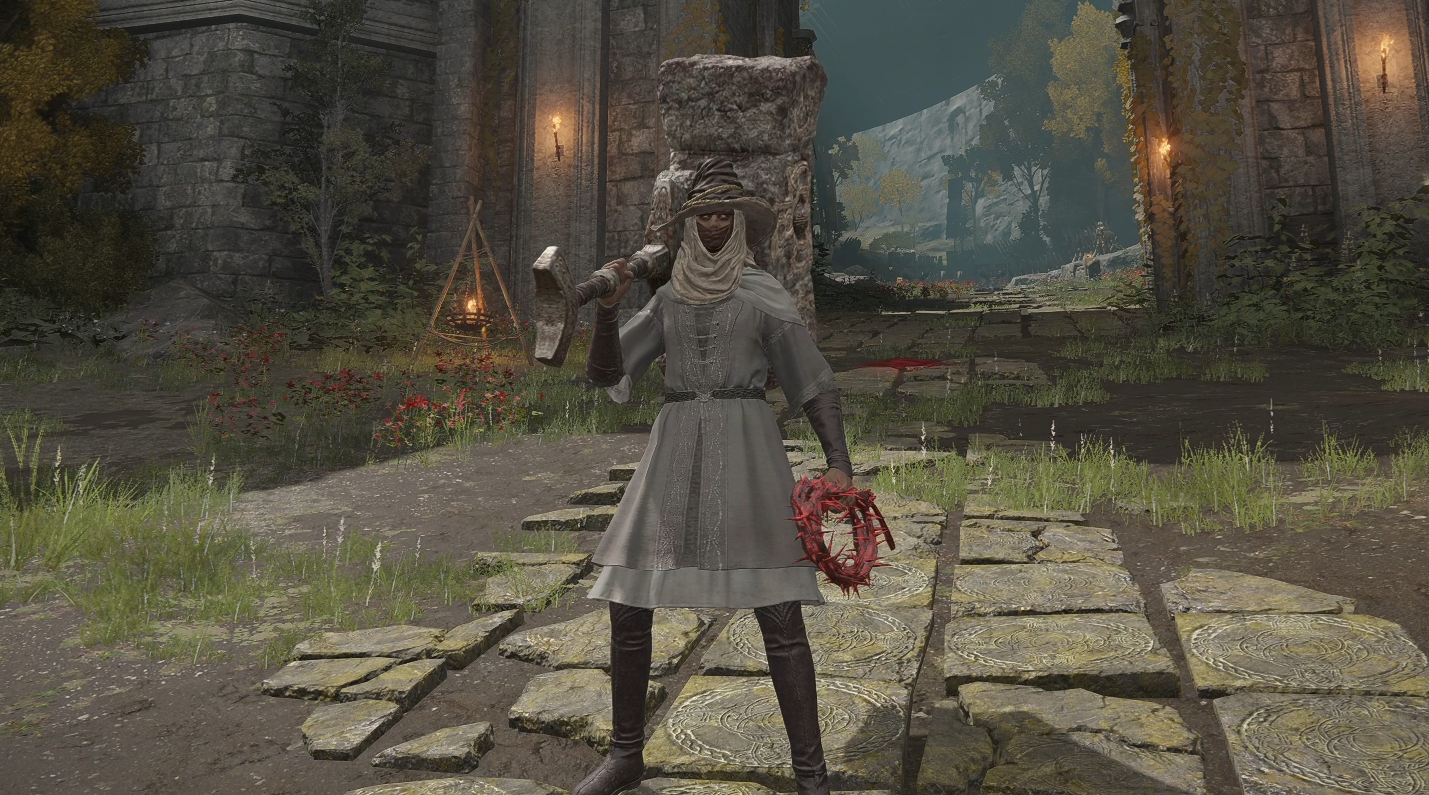 Although your right hand holds your primary weapon, you can hold a secondary equipment in your left hand.

While guarding with a shield is the most common use of your left hand, it can also be useful to hold a weapon with faster attacks (such as a Dagger) or longer reach (such as a Whip) than your right-hand weapon to allow for more versatility in combat. It's not as useful for heavier equipment, since there's no way to do a left-hand heavy attack. Some builds also find it useful to hold a Glintstone Staff or Sacred Seal in the left hand to mix and match spellcasting and melee attacks. 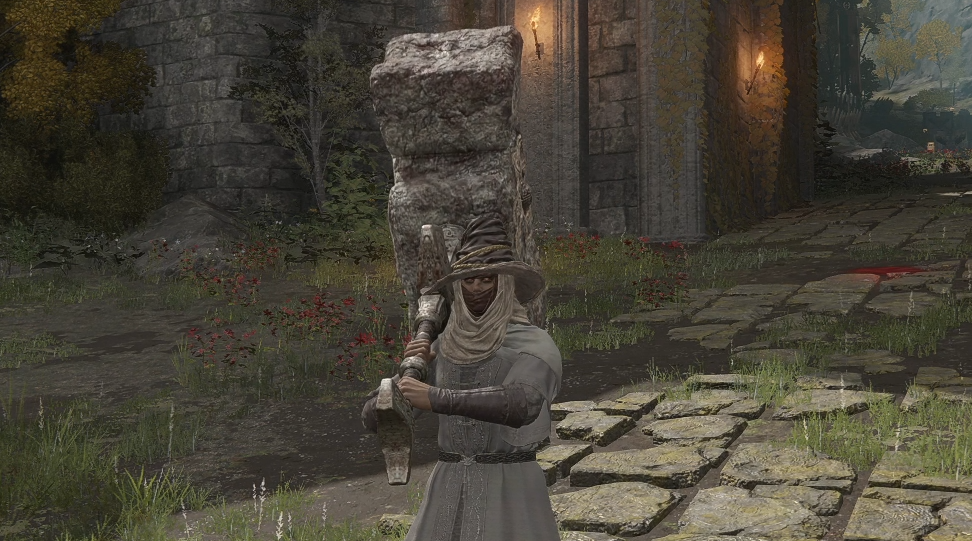 Holding a weapon in both hands gives you a different moveset and increases your effective Strength by 50%, at the cost of not having access to your left-hand equipment.

Because of its bonus to Strength, you can effectively wield weapons with higher Strength requirements two-handed than you can one-handed. For example, if you have 22 Strength, you can two-hand the Brick Hammer without any penalty because 22 × 150% = 33 which is greater than the Brick Hammer's 31 Strength requirement. This makes two-handing a great way for low-level characters to use powerful Strength weapons.

All melee weapons, as well as Glintstone Staves and Sacred Seals, can be used to guard while two-handing (similar to how you'd otherwise use a Shield in your left hand). You can also attack with a Shield if you two-hand it. Be aware though that weapons tend to have low Damage Negation and Guard Boost stats, while Shields tend to do very little damage.

If you two-hand Fists or Claws, you'll equip one in each hand rather than holding a single one in both hands. Your attacks will then become multi-hit chain attacks, which can be valuable for building up status effects on enemies.

If you equip two weapons of the same Weapon Type in your left and right hands, you gain access to a special Power Attack that uses both weapons at once.

Because power attacks hit with both weapons at once or in quick succession, they're often substantially stronger than their one- or two-handed equivalents. Power stancing light weapons will allow you to execute long attack chains and quickly build up status effects on enemies, while power stancing heavy weapons will do massive amounts of damage with each hit. In exchange, you give up the ability to guard as well as the strength bonus that comes from two-handing.

While almost all weapons power stance with other weapons of the same type, there are two exceptions: 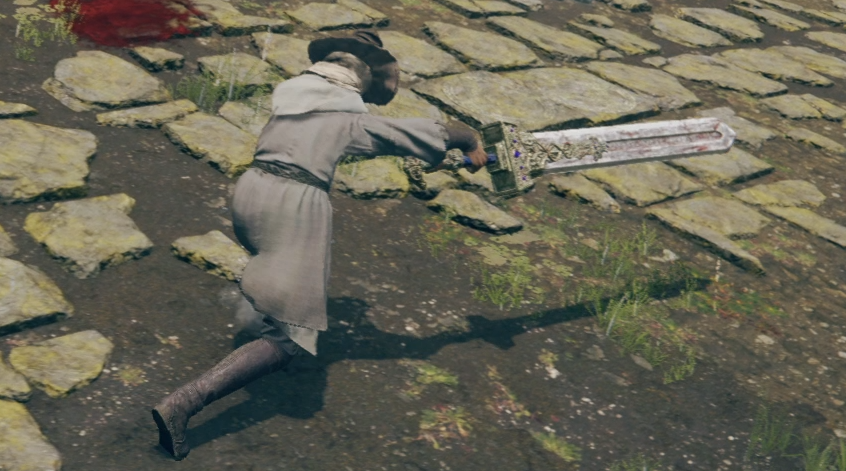 There are a few variations that will replace the standard light attack in certain contexts.

Each of these attacks also has its own variation if you're two-handing or power stancing. You'll usually end up using them without thinking, which is totally fine for most players: by and large they accomplish the exact same purpose as standing light attacks. But if you've mastered the rest of the attacks and you're looking for a bit of extra depth, pay attention to the ways different contextual attacks might have different range, Stance/Poise damage, or even damage types. For example, almost all of the Greatsword's attacks do Standard Damage, but its Crouch Attack does Pierce Damage which is particularly effective against certain enemies including dragons.