Borealis, the Freezing Fog is a Greater Foe Boss in Elden Ring. This Elden Ring Borealis, the Freezing Fog Guide features boss locations, tips, strategies and videos on how to defeat Agheel easily, as well as boss stats and lore for Agheel. Bosses are unique and challenging Enemies that can be encountered all over the Lands Between. Great Enemy bosses can drop unique Spirit Ashes, Weapons, Spells, and other various Items. This is an optional boss, as players don't need to defeat it in order to advance in Elden Ring. However, doing so yields useful items, as well as Runes.

The ice dragons were once lords of the mountaintops long ago, until they were defeated by the Fire Giants and chased from the peak.

In the middle of the blizzard on the frozen lake southeast of the Freezing Lake Site of Grace. [Map Link]

The Best Tips for Borealis the Freezing Fog: 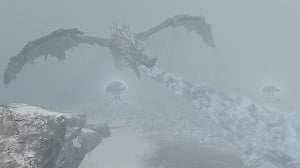