Builds for Elden Ring focuses on various combinations that are created by a player which consists of a specified Stats, Weapons, Armor, and many more which can help the player achieve their goal through battle and exploration. Each build that will be listed is unique and has a different approach to a user's playstyle that can be used in both PvE and PvP situations. Listed below are the various builds that we recommend for players to try and use.

Paladin Builds in Elden Ring use a mix of Incantations and Weapons to deal damage and to heal themselves and others. They excel at staying alive when others would not.

The way this Build works is that you will cast Holy Ground at the beginning of hard fights to heal you (and allies if you co-op), and you'll use your weapon to attack and Shield to Block. The Leather Shield is the best you can get if you aren't an Enchanted Knight, so it'll have to do. 95% Physical Mitigation is not bad.

You can then use Beast Claw to attack if you aren't in water, and the Heal Incantation to heal if you need to. This allows you to stack your FP flasks without needing to have healing ones.

Make sure you have enough Strength to Mid Roll in the Crucible Set, and then crank Faith and Mind for more damage with Beast Claw and healing with Heal. Mind will give you a larger FP pool, so you can cast more. Dexterity is only to increase cast speed and melee damage, and is prioritized last. 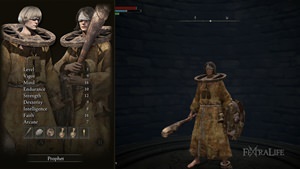 The way this Build works is that you can thin enemies using Glintstone Stars, or pick off more dangerous ones with it, before moving in close for melee combat. You can use your R1 attack, Blocking with the best Shield in the Network Test (Carian Glinstone Shield) as necessary. Or you can use Carian Piercer or Carian Glintsword instead of traditional melee attacks, as these deal incredible damage.

Use Glintstone Arc on large batches of enemies so that you don't have to pick them off one by one, and use Glintstone Arch if you plan to PvP or if you are facing very difficult enemies.

Strength is needed for melee damage and to use the Crucible Set with a mid-roll, and Intelligence improves Spell damage. Mind increases your FP pool, and Dexterity increases damage slightly as well as increases cast speed. 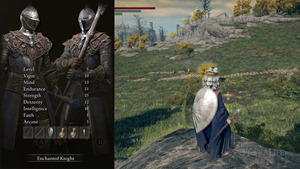 The Blood Barbarian Build uses a combination of two Greatswords to Powerstance and deal absolutely devastating damage to enemies by hitting them with both during each attack. This is an extremely high damage melee build, that focuses less on protection, and more on damage.

The way this Build works is that you will dual wield two Bastard Swords and use your L1 to deal incredibly high damage to enemies. You'll be wearing the Crucible Set which will give you the most protection, and since you'll have very high Strength and Vigor you should be able to mid-roll and survive many hits even if you miss the timing on your Dodges.

You'll crank Strength and Vigor so that you can take hits while keep dishing out the damage.

What Skill you use is not especially important with this Build, but you can choose Thunderbolt to give you some range if you want, though it will decrease the Strength Scaling of one Bastard Sword. 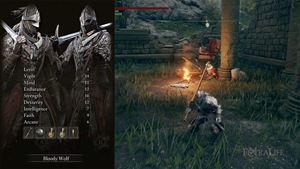 Archer Builds are harder to play, and aren't recommended for beginner players, but they can work well with a little practice. You'll need to procure the Shortbow from the Church of Elleh merchant to begin playing like one though, so head there right away.

The way this Build works is that you'll use your Bow to pick off enemies from range, only engaging in melee combat if you must. You'll use your Skill Firing Position as much as you can to make every arrow deal the most possible damage, only using regular R1 attacks when you don't have time to use it.

You'll need to crank Dexterity to maximize your damage or you'll fall behind really fast. You will also need to buy a bunch of arrows from the merchant in Church of Elleh or learn to craft them by finding Cookbooks around the map. This will let you make different types of arrows and will help boost your damage.

Mind will increase your overall FP pool, allowing you to use Firing Position more often, and Strength will slightly boost damage while also allowing you to wear better Armor if you need more protection. Vigor boosts HP, so you may want some if you find yourself dying too often. 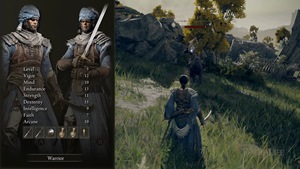