Ordovis, one of the two honored as foremost among the Crucible Knights.

Spearfishing: Focus on killing the Crucible Knight with the spear first, since it has the best reach and is best at covering distance and disrupting your attacks on the other one. Try to draw it away from Ordovis, and keep pillars between you and Ordovis when you're attacking the spear knight. Don't get greedy: if you get in more than a hit or two at a time, Ordovis will catch up to you and make you regret it.

Parry Master: Parrying is particularly effective in this fight, since the invulnerability frames during the parry itself and the critical hit afterwards will both help keep you from getting overwhelmed by the double-team. It's still a good idea to try to separate them, but parrying will help you get more damage in more quickly once you've got one on its own.

Dodge & Snipe: Magic and ranged users will often have an easier time with this fight, because the Crucible Knights are relatively slow. The main moves to watch out for are Flying Dive and Great Tail Spin from Ordovis; and Flying Dash from the Knight with the Spear. Learn to dodge these and get in damage when you can, especially with spells that do Lightning or Fire damage, and you'll be golden. 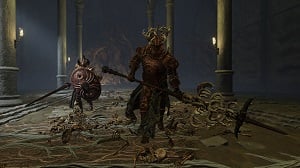