Where to Find Crucible Knight Siluria In Elden Ring

Head northwest from the Nameless Eternal City Site of Grace down into the lower wetlands, then turn west and head around the base of the building. Turn northwest again towards the Deeproot Depths West spiritspring. [Map Link] You'll land directly in front of Siluria, who is standing in front of the huge tree branch. [Map Link] 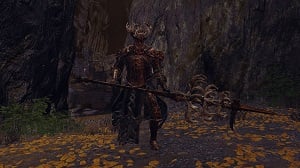