Death Rite Bird is a group of Bosses with the same name in Elden Ring. Death Rite Birds are skeletal bird-like creature found in various locations. These are optional bosses as players are not required to defeat them in order to advance in Elden Ring, but they do provide useful items and Runes upon defeat.

In the time when there was no Erdtree, death was burned in ghostflame. Deathbirds were the keepers of that fire. The birds are graveyard fire keepers; it is said they rake out the ashen remains of the dead from their kilns.

Death Rite Bird is a Boss found in multiple locations.

The Death Rite Bird can be found in multiple locations:

It is advisable not to fight the Death Rite Bird on horseback, as most of its attacks will still clip you even at full sprint on Torrent. Using a Faith build helps, because this boss is weak to Holy damage, and having the Cipher Pata, Coded Sword, or any Faith-scaling weapon will help out a lot in dealing significant damage. Additionally, make sure to add any of the Holy damage Ashes of War to your weapon (the ones starting with 'Sacred'). Try sticking to its legs and dodge rolling its attacks. When the boss flies away and disengages to attack you using either the Black Pinion Barrage or Rain of Spears, you can quickly use Torrent to run away and avoid the attack, then get close to the boss and dismount your horse.

Many of its abilities can one-shot you if you don't have high HP. Many more deal death-magic chip damage even if you block, or cause some AOE death-magic effect in large areas that track over and through light cover. Combined with its expansive ranged AOE attacks, many of which persist for a long time, allows it to close rapidly and attack again even as you dodge, meaning that ranged attacks are difficult to time. But because of those AOE and magic damage effects, fighting the Birds like the gargoyles (up close under the legs) is also a risky proposition. They can easily hit you while you're mounted, and they have relatively high HP.

For the Central Mountaintop of Giants one, at least, the terrain makes all the difference. To the right side of the arena there's a sort of valley that you can move to the top and bottom of to exploit the horizontal limits to his relatively flat hit-boxes. If he's either significantly above or below you, most of the physical components of his attacks miss, making dealing with any AOE much easier and giving you time to get in hits. It also can help with some of his AOE ranged attacks, like the Black Pinion barrage. If you get a good summon out before you engage, take it slow, and quickly move to keep him on a different level from you, this becomes a significantly easier fight. 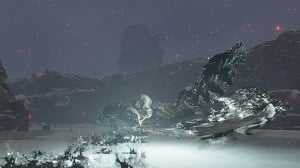 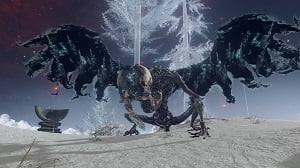 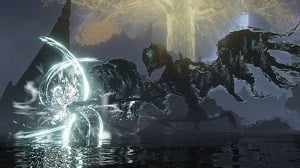 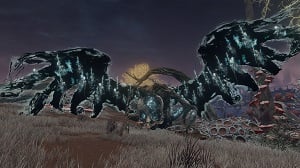