Jump down the ledges to the lowest floor of the Volcano Cave, or follow the southern path.

She usually starts off with a series of basic melee staff attacks that can be avoided if you step back away from her or roll through or away from these attacks. You can even roll towards her and deal a number of hits underneath. The main attack to look out for is her grab attack which can kill players easily if they don't manage to escape. As she approaches 50% health she enters phase 2 and will transition to weaponless combat after tossing away her staff. Instead, she starts to show aggressive slaming behavior. You can still use the same strategy by rolling back from some of these attacks to avoid damage or continue to roll toward or underneath her to gain closer and better position to deal numerous melee attacks.

Recommend using summons to keep agro of boss while using magic spells. Mimic Tear Ashes are pretty effective due to the high health bar. Rock Sling is a pretty effective spell. Summon your spirit ash once you get in the room then doge the hits until your summon starts doing damage and the boss aggros your summon(s). From there, throw your spells at it, be sure to keep an eye on if the boss starts to agro you so you can be prepared to dodge as needed. 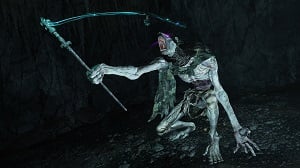