Draconic Tree Sentinel is an overworld Boss in Elden Ring. Draconic Tree Sentinel is a massive knight clad in golden/brownish armor that rides a massive horse and is found in Capital Outskirts. Defeating this boss unlocks the entrance to Leyndell Royal Capital, and is optional only if the player progresses in Fia's questline. Another is also located in the Crumbling Farum Azula as a regular non-respawning enemy.

After the great ancient dragon Gransax attacked, the sentinels had an epiphany. The only way to truly protect the Erdtree was to become dragons themselves.

Results of Defeat on World

As a general overview, Scarlet Rot is the best way to take down this boss, but if that's not accessible then Poison is second best and also strong. There is an easy cheese method to take him down that is 100% reliable and poses no risk. The cheese method is at the bottom.

Godrick's Great Rune coupled with a Rune Arc can help you survive some one hit skills, such as the fireball or Shield Lightning skills.

Its AI is notorious for shooting fireballs whenever you are at medium-to-long range from it, and it's fond of using this attack as a heal-punish. If you remain at even medium distance from it, it's not unusual for this enemy to use this attack in quick succession until you get close enough for any of its melee attacks. If you need to heal, goad it into launching a fireball, dodge to the side, then heal. You will have just enough time to roll out of the way if it responds to your heal with a second fireball.

As of patch 1.03, Great Horned Tragoth is available to summon for this fight. There are no triggers and he's available from level 1. This summon does ease the difficulty but it's by no means a walk in the park. Survival is the foremost priority. At least 20 Vigor, the Knight Armor, Boltdrake, and Dragoncrest Shield talismans should prevent all one-shots and allow for flask use. Alternatively, have at least 20 Endurance and block his physical damage with any 100% physical resistant shield, using Pickled Turtle Neck for stamina.

The key tactic of this fight is staying on the Sentinel's left side (your right) with the shield holding hand. While on his left, he attacks with a slower shield bash that's easier to dodge, does less damage, and allows room to counter attack. When his horse rears back, either for a fireball or stomp, is the best opportunity to roll to his left side. If using Tragoth, simply pause long enough for Tragoth to strike, this shifts his focus and you can safely flank the left/rear side.

Another tactic is using attacks which stagger and break his poise. Hammers can break the sentinel's poise in 3-4 charged heavy attacks, and with Tragoth it's easier to perform. Jumping strong attacks will also cause more stagger and are necessary as the sentinel repeatedly leaps away and repositions throughout the fight. If your HP and defense are sufficient, equipping the Claw Talisman and Raptor's Feathers increase the damage of jumping attacks.

A weakness of the sentinel that's exploitable is his low resistance to DoT (damage over time) from scarlet rot/poison. Most melee builds will not have access to scarlet rot crafting upon reaching Leyndell. However, Poison Grease and Poisonbone Dart are powerful and accessible early on. Apply the first grease at a distance, then sprint in for 2 heavy attacks before his first swing. Apply the second grease when he changes phases. Keep in mind the rot/poison resistance goes up after the first effect, so additional poisons take more hits. It may be better to use darts for the second application as they can be thrown quickly.

If you can keep his aggro focused on you/Tragoth, ranged summons will do more damage than melee summons which tend to die quickly. Because of it's ranged attacks and poison stacks, Spirit Jellyfish Ashes may be the best low-level choice since with 2 poisons it can deplete roughly 20% of his health.

When he has lost 50% of his life bar, he enters phase 2 and adds lightning attacks to his kit. The lightning on his weapon adds AoE distance to his ground slam, so either roll inside the circle or keep a good distance to avoid the larger AoE. He casts a lightning bolt which is telegraphed by raising the shield hand. As soon as the shield drops, roll to avoid the bolt. When he calls a lightning storm, stay back until it clears as he will do a swiping attack with his shield at the same time.

Draconic Tree Sentinel is much heavier than the known Tree Sentinel, with stronger attacks that have added area of effect and more options to strike you at range. Their mount shoots fireballs constantly whenever you are at a long distance from them. And it's very recommended to use your mount moving in circles around them while throwing projectiles. Bring lots of ammunition and bring heavy ammunition if you can. It can be simple to throw attacks all the time, but it's still very tedious as this enemy wears heavy armor.

One the Knight enters to phase 2, it may be recommended to always keep distance and switch between being mounted and unmounted, unmounted to dodge and defend and mounted to attack while moving. Mind the area you are moving, as there are trees around that may block you by surprise and some of the Knight attacks are very unforgiving, as some are even able to one-shot some players. Spirit Ashes are very helpful, but don't use them as distraction, instead you distract the Knight while the spirits attack them, keep them focused on you. Don't expect much as spirits will be eventually defeat as the Knight's attacks affect large area of effect.

Faith casters: Upgrade your sacred seal to +14 for S tier incant scaling. 2 stacks of scarlet rot and chip damage from lightning spear is all that's necessary to defeat the sentinel. Most of his attacks are easily dodged from a distance, just be wary of his leaping slam which has a large AoE sphere. Before the fight, use a physick with Cerulean Hidden Tear and Opaline Bubbletear to make Rotten Breathe free to cast and prevent damage from the first hit. Stand far enough away so that just the edge of the blast hits him. Although lightning spear won't deal heavy damage, it's okay because one rotten breath removes 30% of his HP. If you have trouble applying the second stack of scarlet rot, save your spirit summon until after the first stack of scarlet rot wears out. Once he aggros the summon you have time to cast it.

This method uses Poison Mist incantation, Finger Seal, and Cerulean Flasks to replenish FP. To cast Poison Mist safely you will need to sneak behind the Sentinel. There are 2 ways, you can summon a spirit ash to distract him, move to the fog gate, quit to main menu and reload. Or you can simply hug the wall on his right side, sneaking while crouched down and you can circle around him. Either way once you're behind him safely, repeatedly cast Poison Mist. It requires 2-3 casts to poison him. The AI doesn't recognize this as an attack since it deals no direct damage, and the sentinel won't move/attack. Once the poison eventually wears off, cast to apply again until he dies. This process takes 10-15 minutes as the poison takes time to tick down. 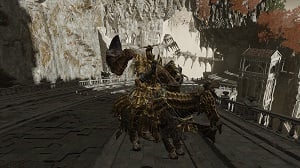 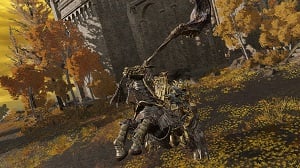