Where to Find Dragonkin Soldier In Elden Ring

The Best Tips for Dragonkin Soldier:

Ankle Biter: Stay near its legs as much as possible, where few of its attacks will damage you. Take care to avoid running or dodging forward towards its the stomach, since melee weapons without a particularly long reach tend to get blocked by its large belt. Instead, move forward and to the left or right to reach the Soldier's elbows or knees. Even when it turns around, you'll usually have enough time to run around its side and continue attacking. The main attacks to watch out for are Two-Hand Slam and Deep Slam, which create large enough shockwaves to hit you even at its feet. When it starts raising its hands for one of these, back off and jump attack in as it finishes.

Circle and Strafe: Dragonkin Soldier's movements are quite slow, so if you keep a medium distance it should be fairly easy to tell when it's safe to start attacking and when you should prepare to dodge. Circle clockwise to give yourself a bit of a head start against its longest-ranged attacks, and be prepared to start running if it roars to begin its Charge attack. Consider using Barricade Shield to block any heavy attacks that you don't have time to dodge.

Head south from the Worshippers' Woods Site of Grace to a collapsed pillar with an Ancestral Follower archer perched on it. Follower the pillar up to its base, where you'll see the Siofra River East waygate. [Map Link] This waygate will transport you to the plateau in the center of Siofra River. When you arrive, head northwest to the open plain of shallow water, where you'll find the Dragonkin Soldier collapsed in a heap. As you approach, it will rise up and the fight will begin. [Map Link]

You can also reach this boss from the Ancestral Woods Site of Grace by carefully dropping down from above.

Dragonkin Soldier has long reach and can quickly catch up to you if you try to stay too far away. Get too close, and it will slam the ground and cause shockwaves. But if you keep a medium distance, you can force it into a pattern where it uses close to mid range attacks which can easily be avoided on horseback by charging the boss and staying to your right. Even its left-hand arm swing will go over your head. You can get in several hits while the boss recovers from its attacks, and then dash back to medium range, rinse, and repeat.

Head south-southeast from the Lake of Rot Shoreside until you see the Dragonkin Soldier slumped over in the rot. If this is your first time approaching it, make sure to press the switch a short way to the east to raise a few platforms out of the rot so you can stand near it without getting infected. [Map Link] 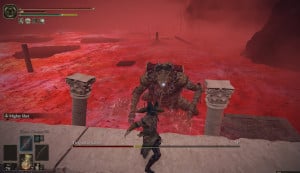 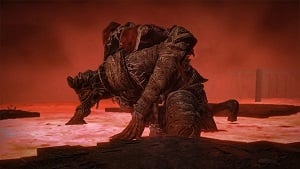