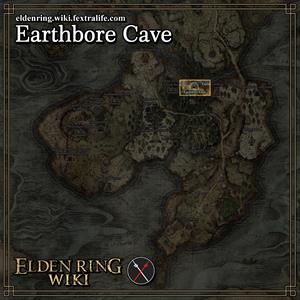 All NPCs and Merchants in Earthbore Cave

Earthbore Cave can be found on the north side of Weeping Peninsula. Players can get to the cave by heading west from the Lookout Tower along the cliffside of the map or going north through the forest area. At the entrance of the cave players can see a small fire on the left, and will find a Site of Grace inside. This cave is a linear path with no branching directions for players to take, players will want to bring a torch to help them get through the cave but the fight with the boss is naturally lit.

Leaving the Site of Grace heading into the caves, the first chamber players will see is a room with a treasure chest and cave moss on the left. Looking carefully at the ground players will see that the ground directly between the entrance of the room and the chest are riddled in cracks. Carefully walk around this area of the ground to loot the chest and cave moss. The ground here will crumble when walked over and will drop players down into the large chamber right in front of the Large Rat and 3 Rats.

If players do not fall through the ground, the next room they visit will be a small room with 2 rats and a body to loot. Players will then walk through a small tunnel into the Large Chamber to face the Large Rat and 3 rats. Using ranged abilities or through kiting and positioning you can retreat into the tunnel to isolate the giant rat to make the fight easier and avoid being surrounded. Past the large chamber is a tunnel with 2 Rats and 2 bodies to pillage ending with hole players have to jump down at the end of the tunnel. Jump down the rocks to get to the bottom safely then walk through the thin tunnel to find the sleeping Runebear, this cavern has natural lighting so players can stow the torch away for the fight.

This fight is with just the boss with no additional enemies involved. The boss is found sleeping when the players first enter the cavern so players can prepare themselves for the fight without any surprise.

The cavern that the player has to fight in is not very large, there is one elevated platform that players can get on to but otherwise no obstacles to use to kite the boss. A good strategy for the boss fight here is to use spirit ashes that will summon allies to help deal damage and also to take the focus of the boss off the player giving time to replenish lost HP and FP.

The reward for this fight is the Spelldrake Talisman, loot the two corpses then exit the cave using the shortcut.