To find this dungeon, start at the Zamor Ruins Grace. Continue forwards (heading through the ruins eastward, then going underneath the mountain as you turn north). You'll find a bridge with a group of fire monks. There's a ledge on the east side of the encounter area, with the door at the end of said ledge. [Elden Ring Map Location]. 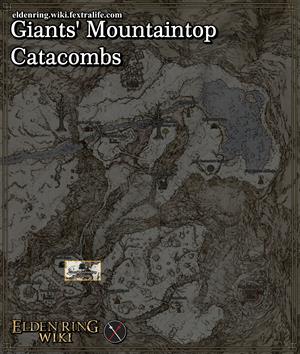 All NPCs and Merchants in Giants' Mountaintop Catacombs

This dungeon can be disorienting due to traversing very similar sets of rooms more than once. Similar rooms will be numbered to help.

From the Site of Grace go down two flights of stairs, an Imp will be hanging off the far wall to jump onto you. The room straight ahead will have another imp on the wall, a second one will ambush you from the right once you enter. Pick up the Grave Glovewort (7), then turn around and to the left. 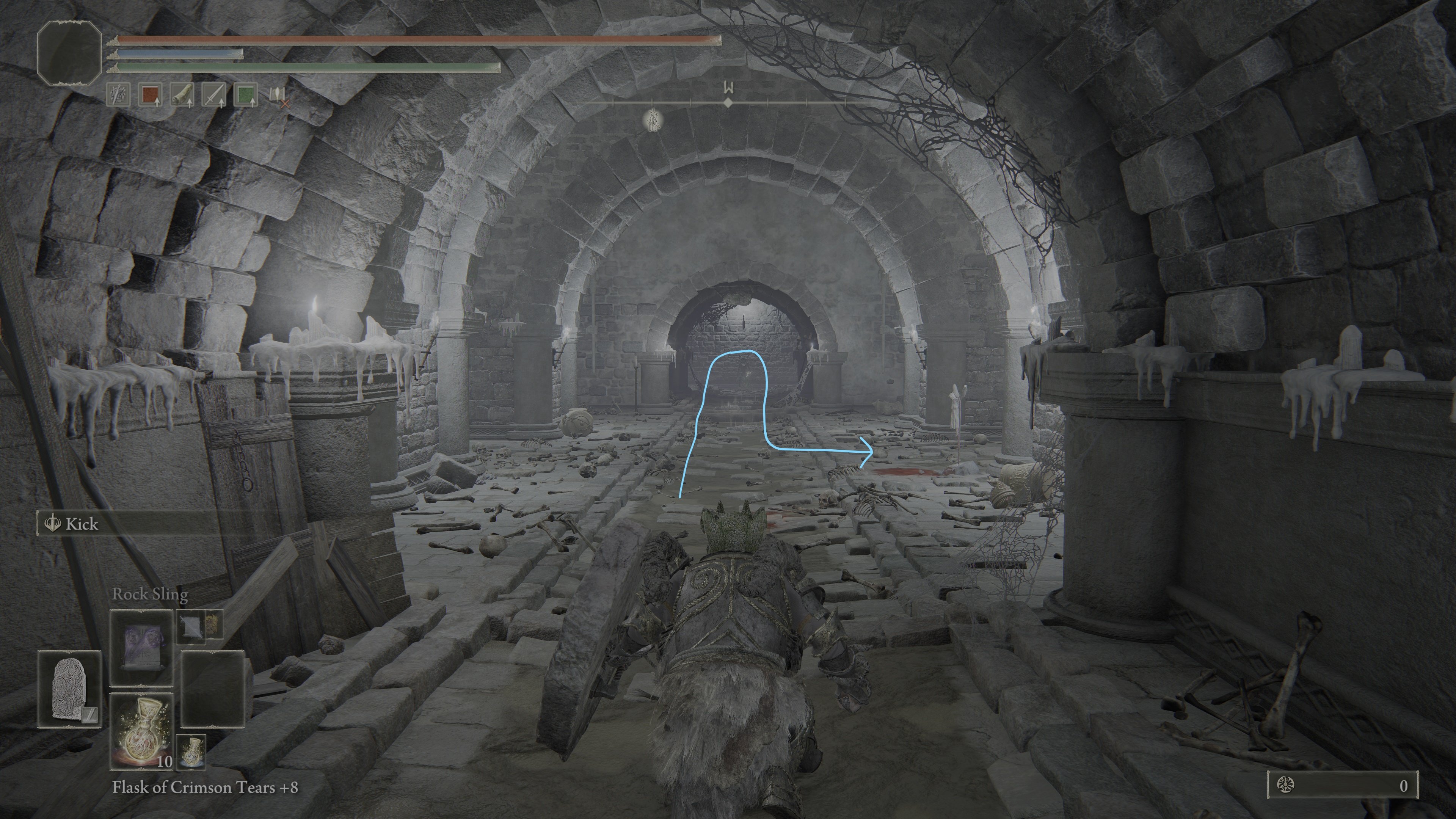 After fighting past two more imps, you will reach an elevator  (Elevator 1) which you should take down. 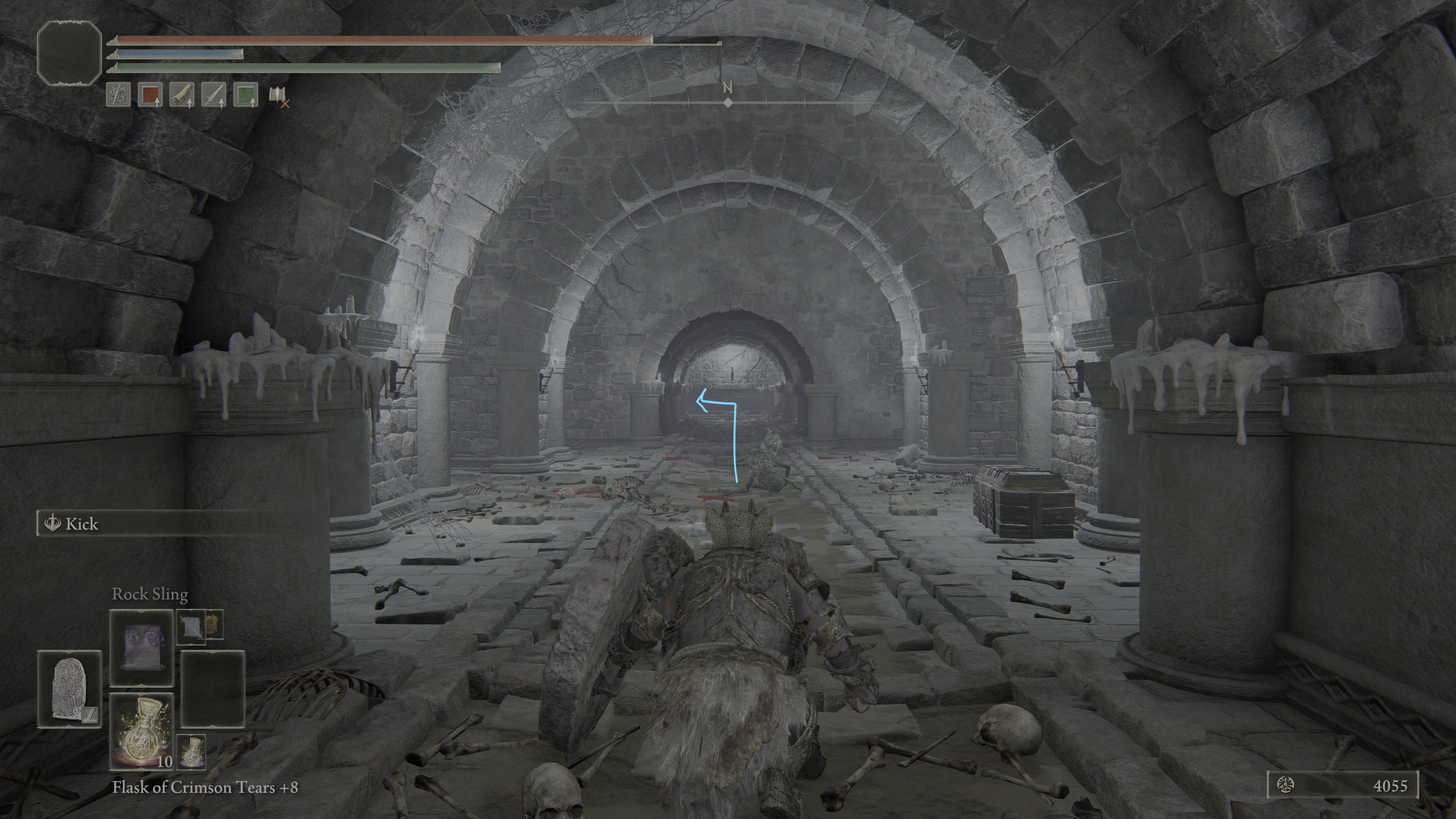 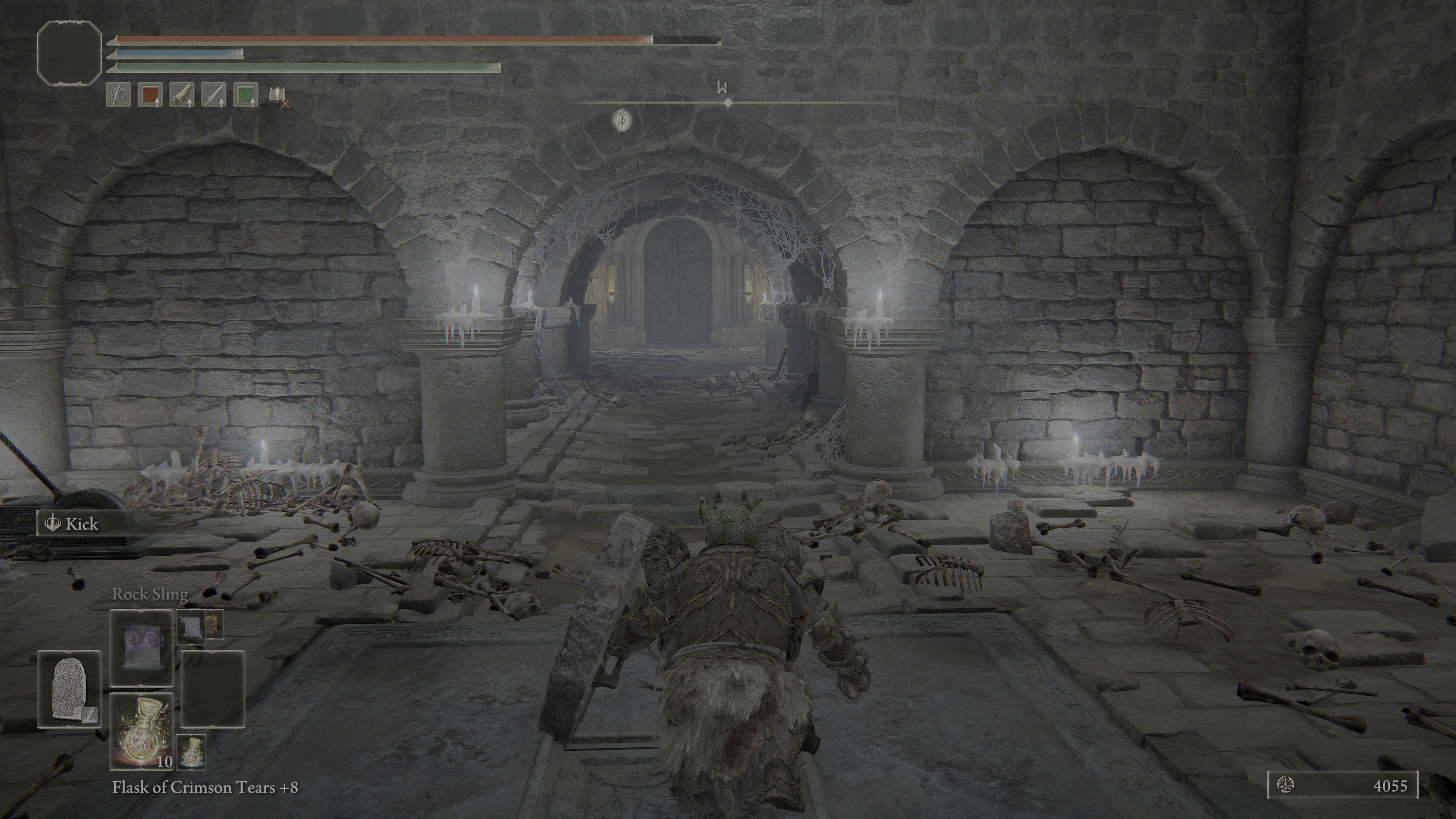 Optional Route 1 (Reward: Spirit Ashes): Send Elevator1 back up but stay on the lower level. The elevator has another platform which will be accessible to you now. Take it down to reach the lowest level of the catacombs. There is an imp here and a Lesser Burial Watchdog, the magical variant. You can cheese it slightly using the stairs. Pick up the Grave Glovewort (8) below the stairs, then proceed, but be careful since a statue will spit frostbite-inflicting dust at you. Duck into the corridor on the left, but avoid stepping on the pressure plate there. Take the statue out by hitting it, then go back to the corridor on the left to pick up Grave Glovewort (8) while being ambushed by two imps. Ahead, there is another statue, this time you have to turn right to avoid it. However, the corridor is behind an illusory wall (identifyable by being "flat" without the usual rims) and an imp hides inside. In the room with the second statue is another Lesser Burial Watchdog (physical variant). Consider using the statue by luring the watchdog into the corridor to take it out. Afterwards, pick up the Fire Monk Ashes from a chest behind the statue. This route is a dead-end to make your way back up Elevator 1.

On the main route, past Elevator 1, take a left past the locked doors to the boss. Fight past some imps until you reach another elevator with ropes attaching it to the ceiling (Elevator 2). 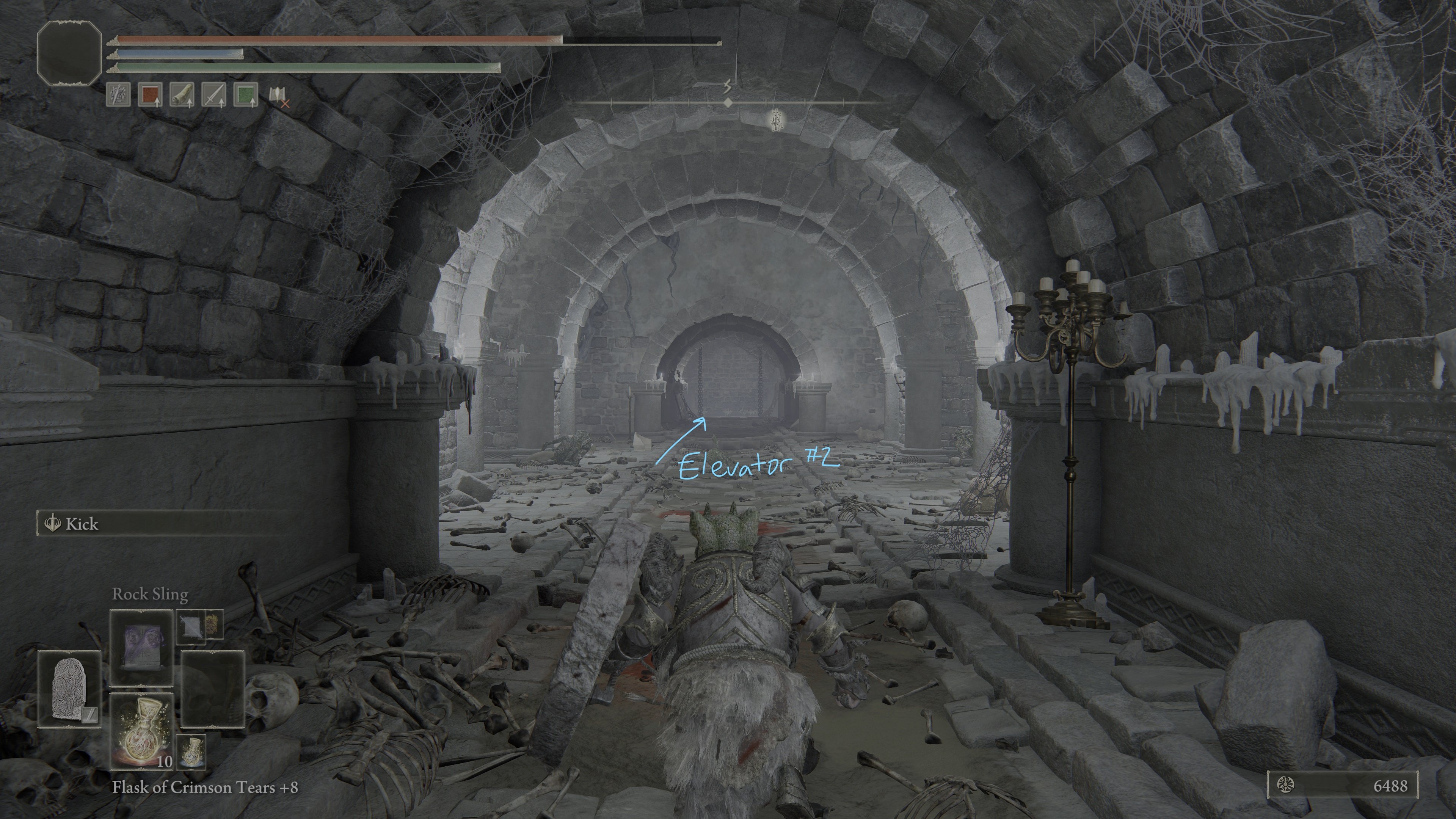 Take this elevator down, and proceed forward, you will find a square room with a green statue (Statue Room 1) 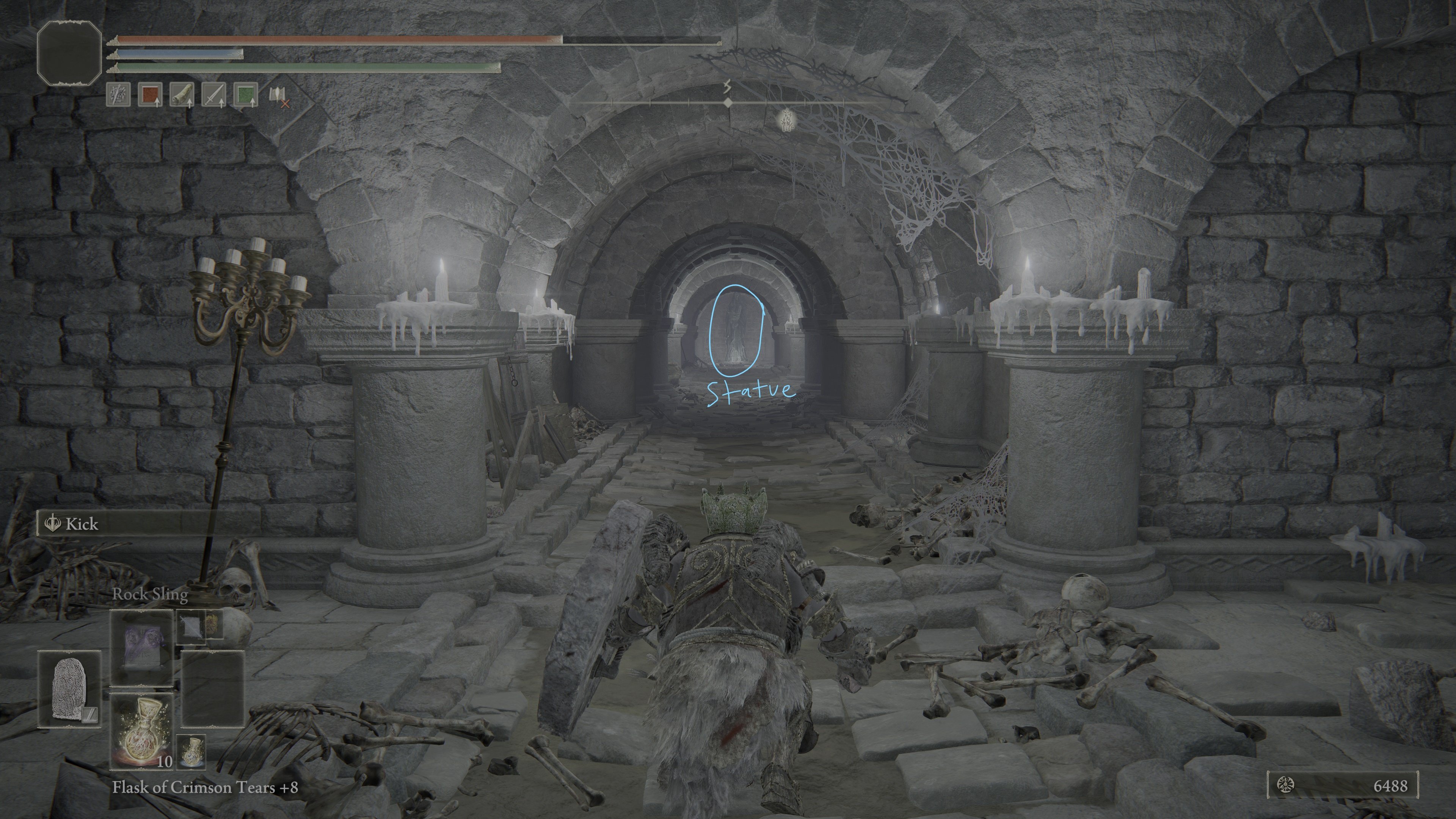 Here you will then encounter a Giant Living Jar, defeat it -- if you look up, you will see a corpse with loot hanging off, and a smaller statue facing the wall. This is the location of the lever that opens the boos doors, which we'll reach later. 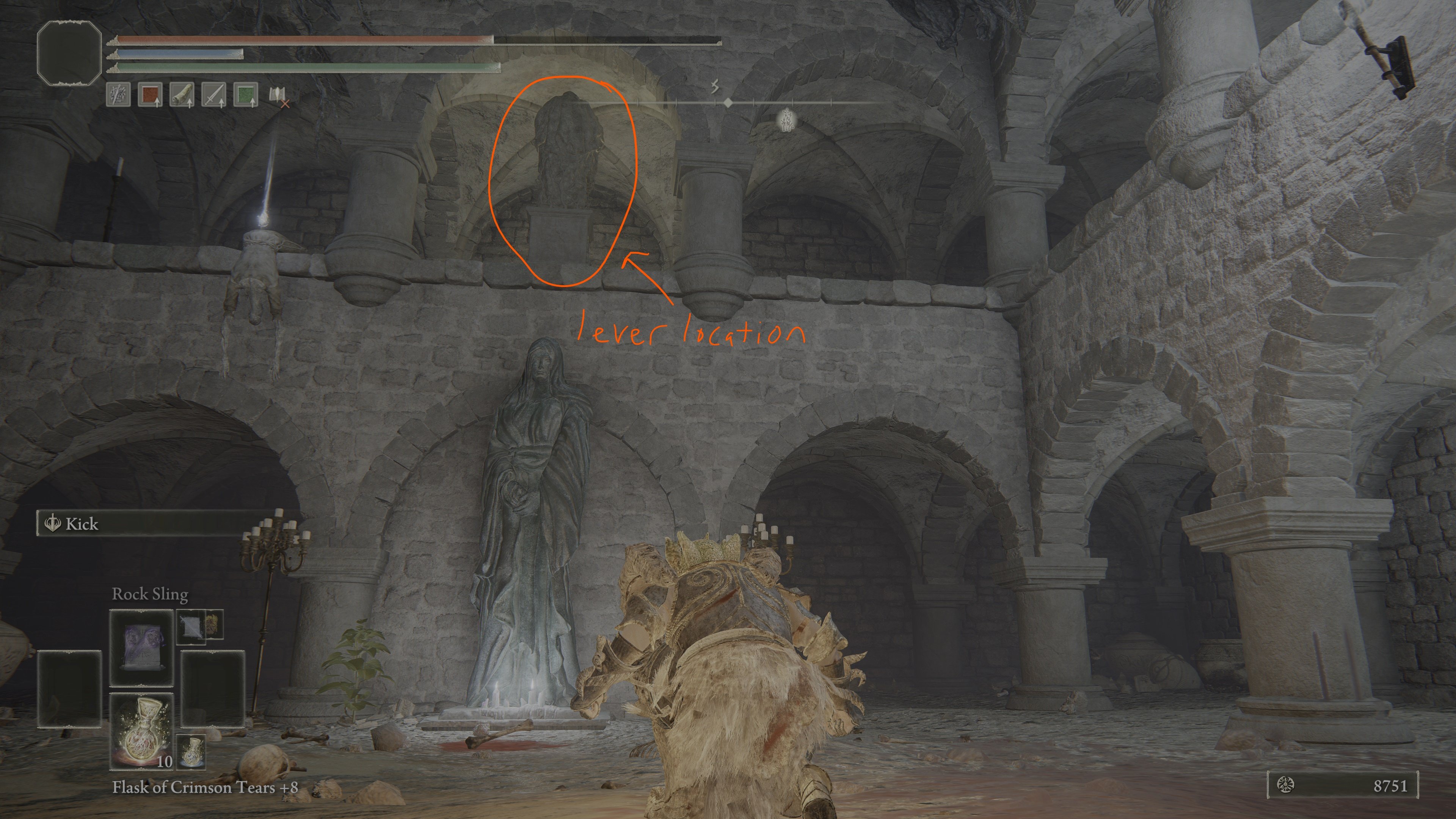 From here, turn right, proceeding up the stairs. Be careful with the pressure plated dart trap. Once you reach the edge of the hallway, turn left, and you'll see another set of steps taking you into a room with multiple guillotine blades. 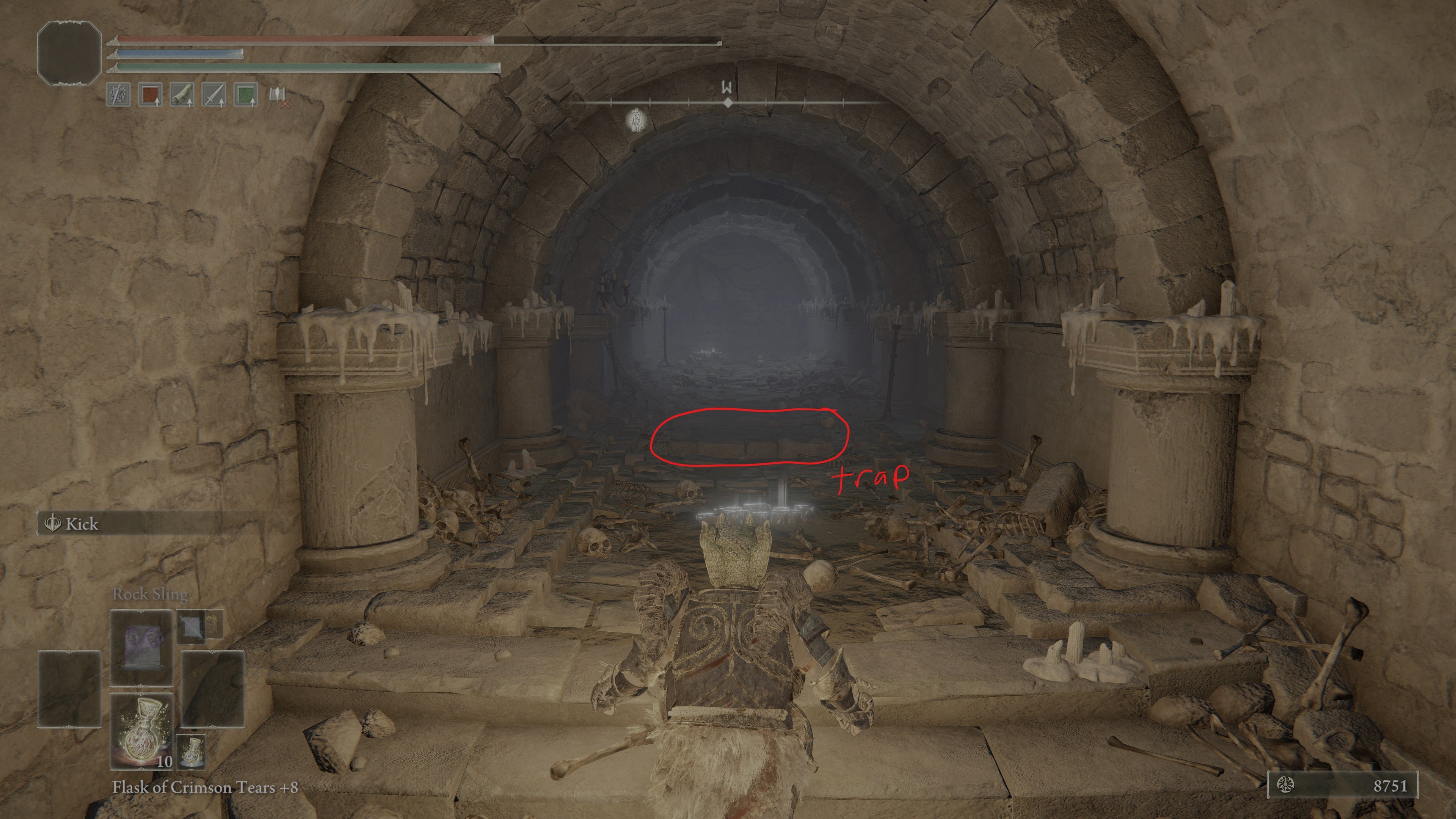 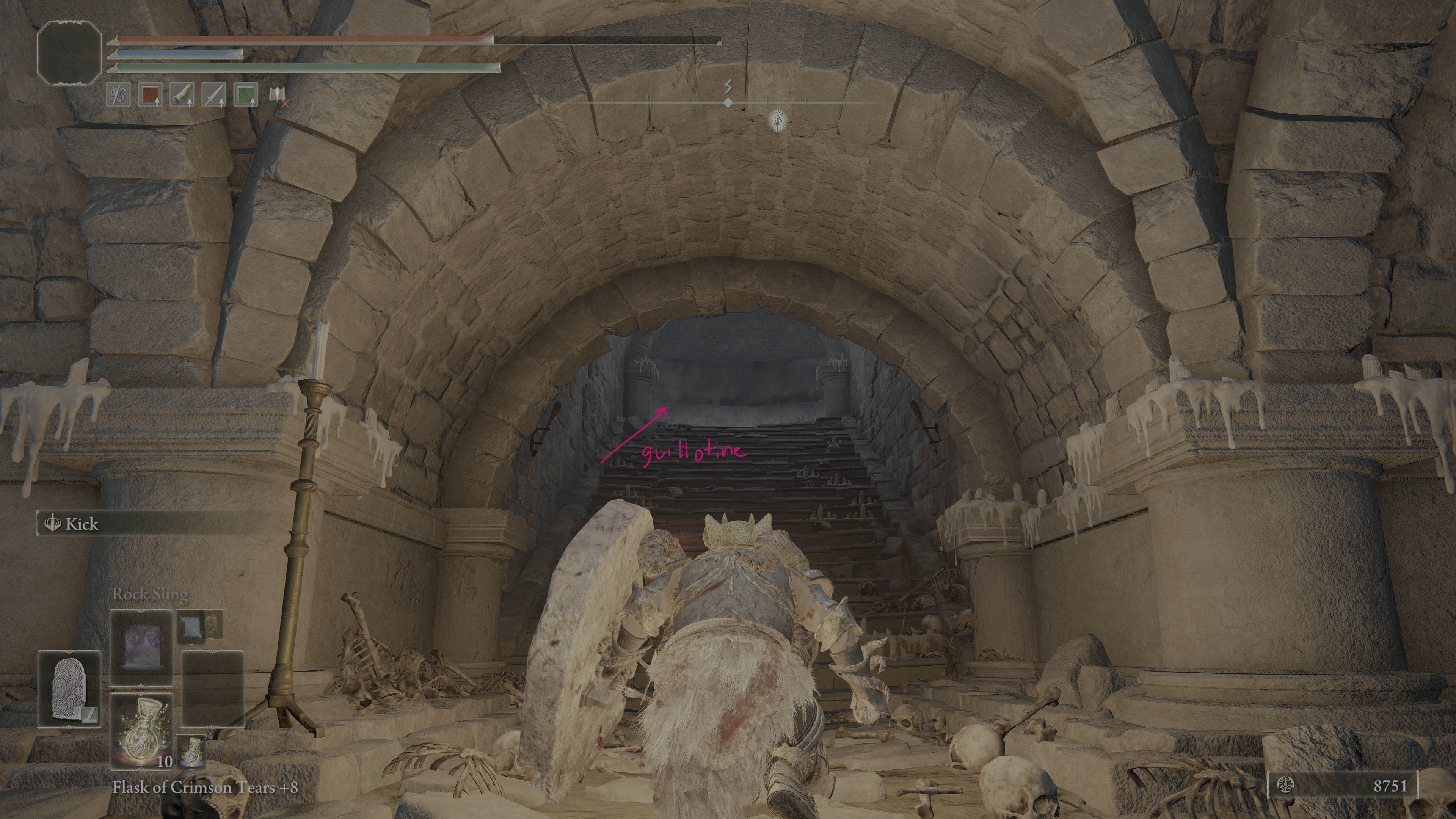 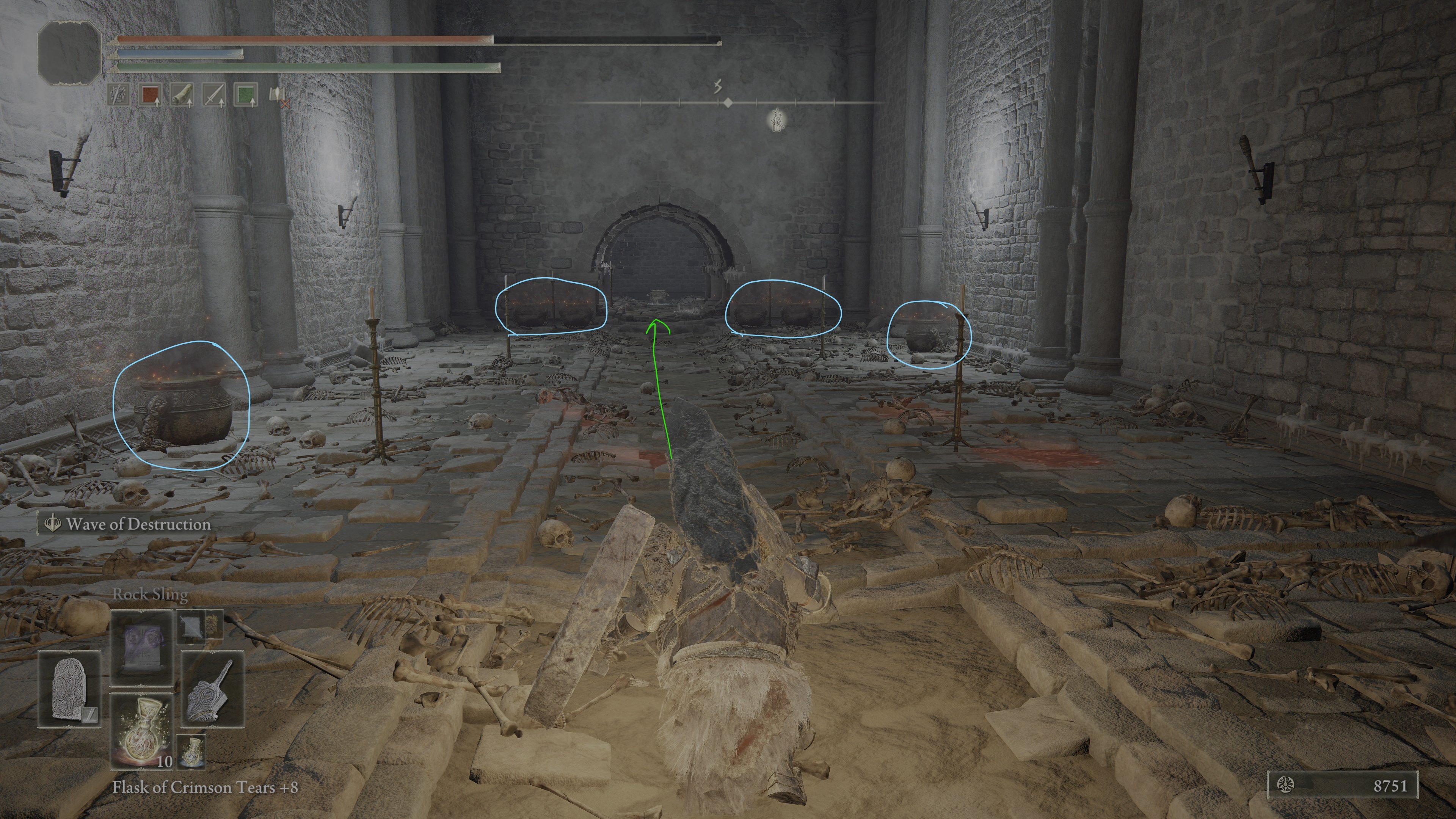 Make your way through to the living jar, defeat it, and then on your way out, turn right and proceed up the stairs. 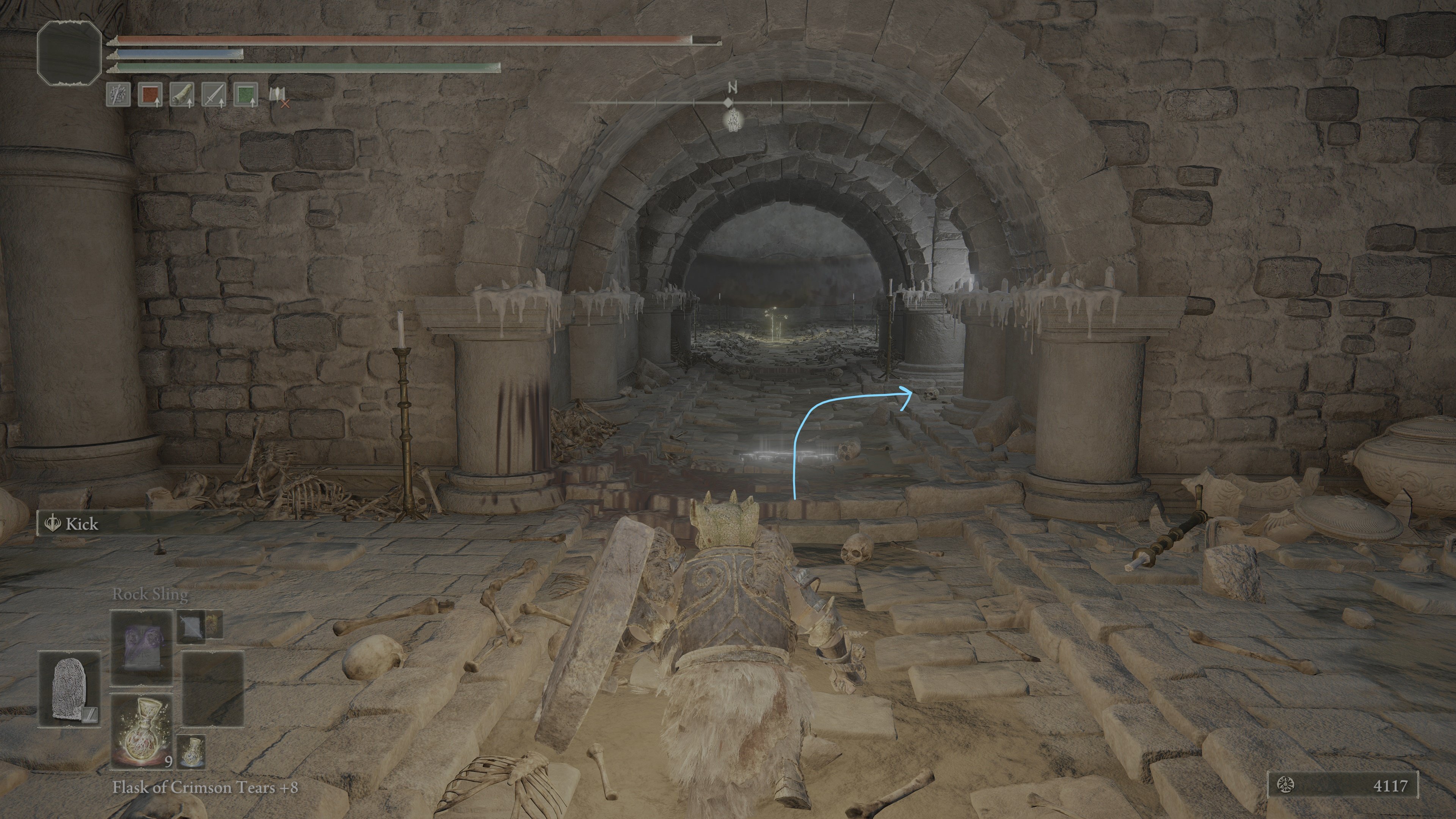 You'll find many more enemies in the next corridor -- 6 Land Squirts to be exact. Defeat them, then turn left and go up the stairs. 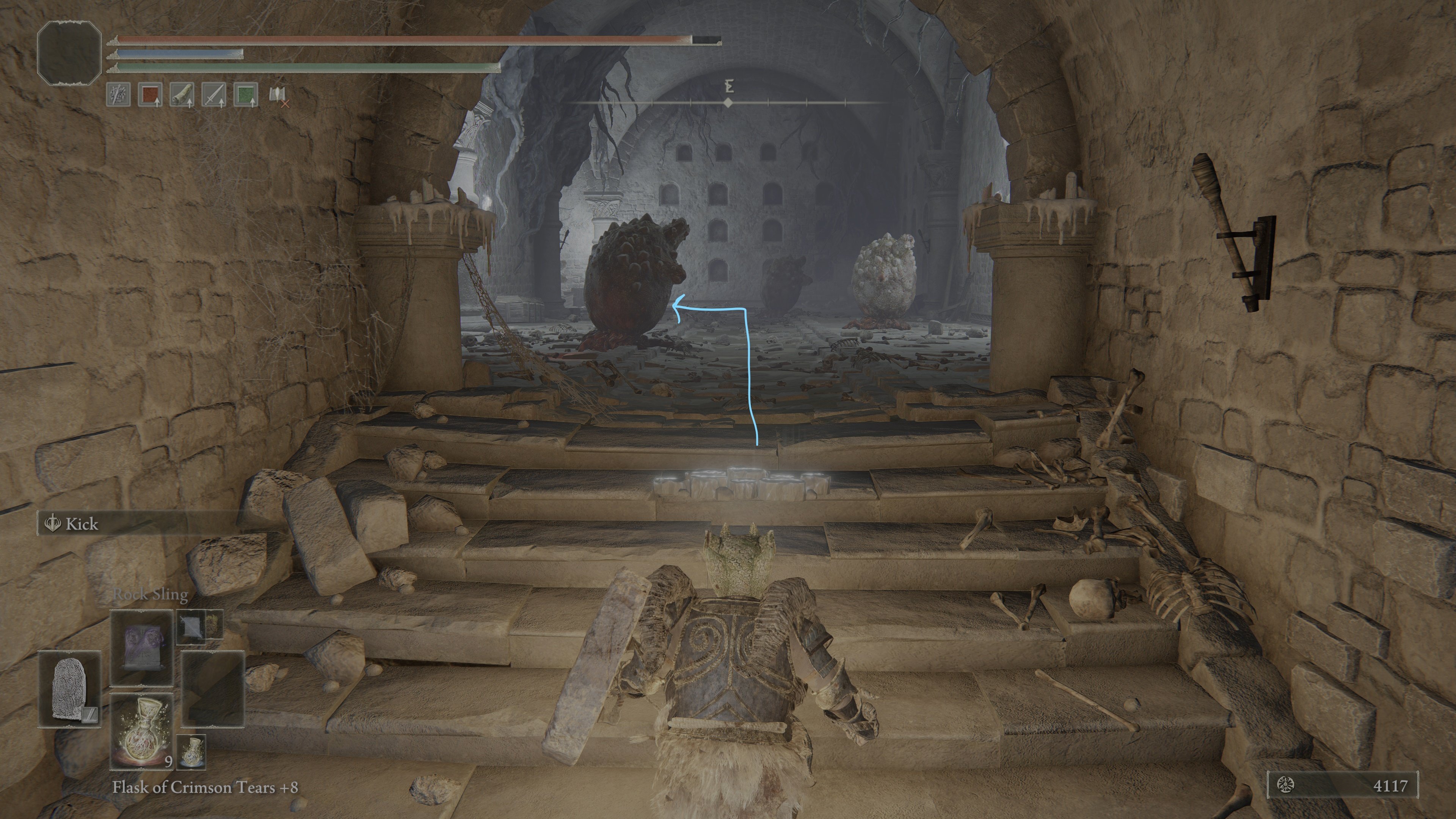 Avoid the pressure plate in front of you, then continue a few paces forward to fight another giant living jar in the last and pick up a Grave Glovewort (7) (you can also use the dart trap that is activated by the pressure plate to take out the living jar). Between the squirts room and the room with the jar (the room with the pressure plate), look for an alcove on the side (it's on your left if you're approaching the room, or on your right if you're exiting it) and drop down there -- but before you fall, grab the Stimulating Boluses from the corpse to the left. 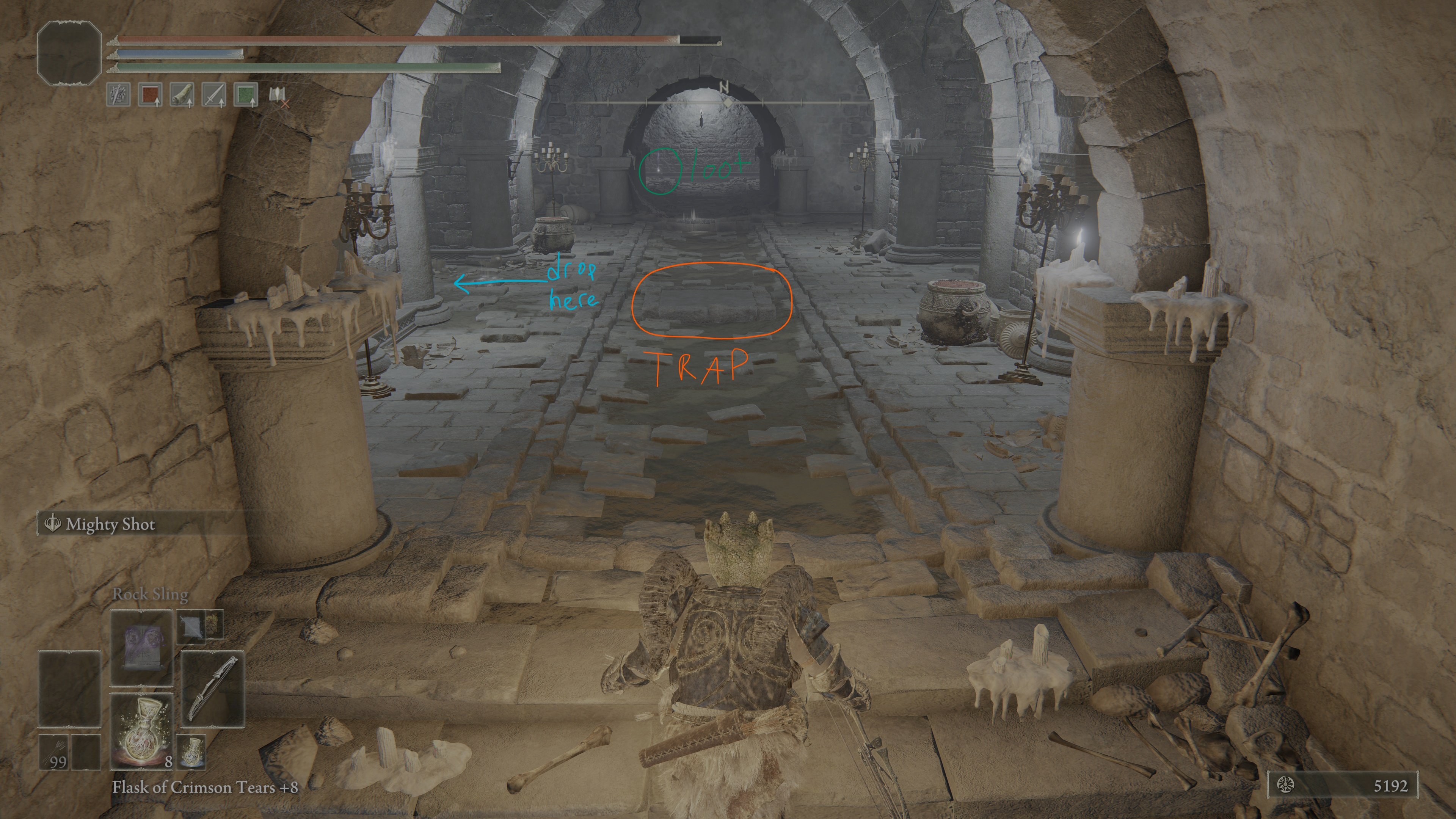 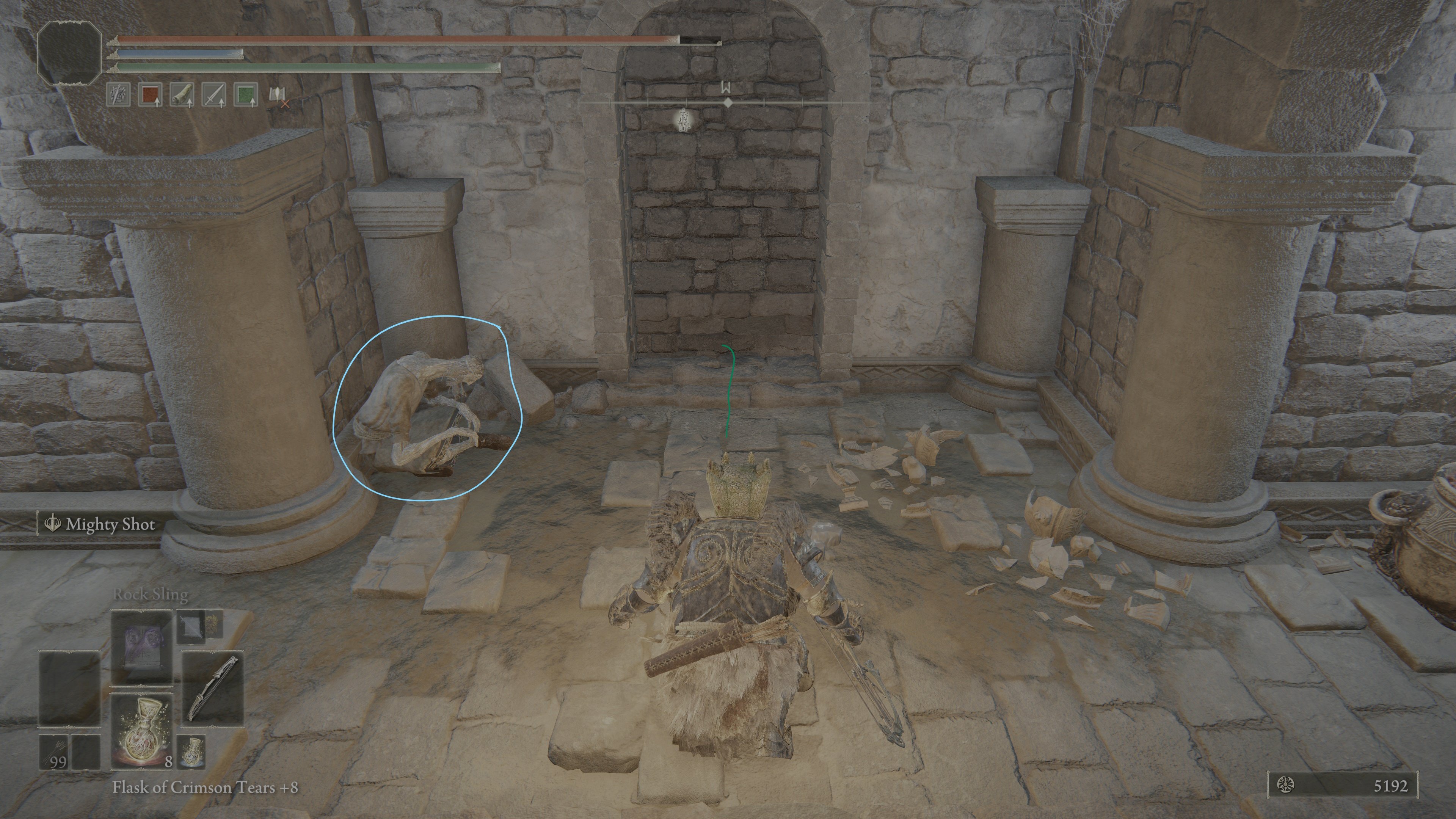 When you land, you'll be on a rectangular platform -- to your left, you should immediately see a corpse holding a Nascent Butterfly. 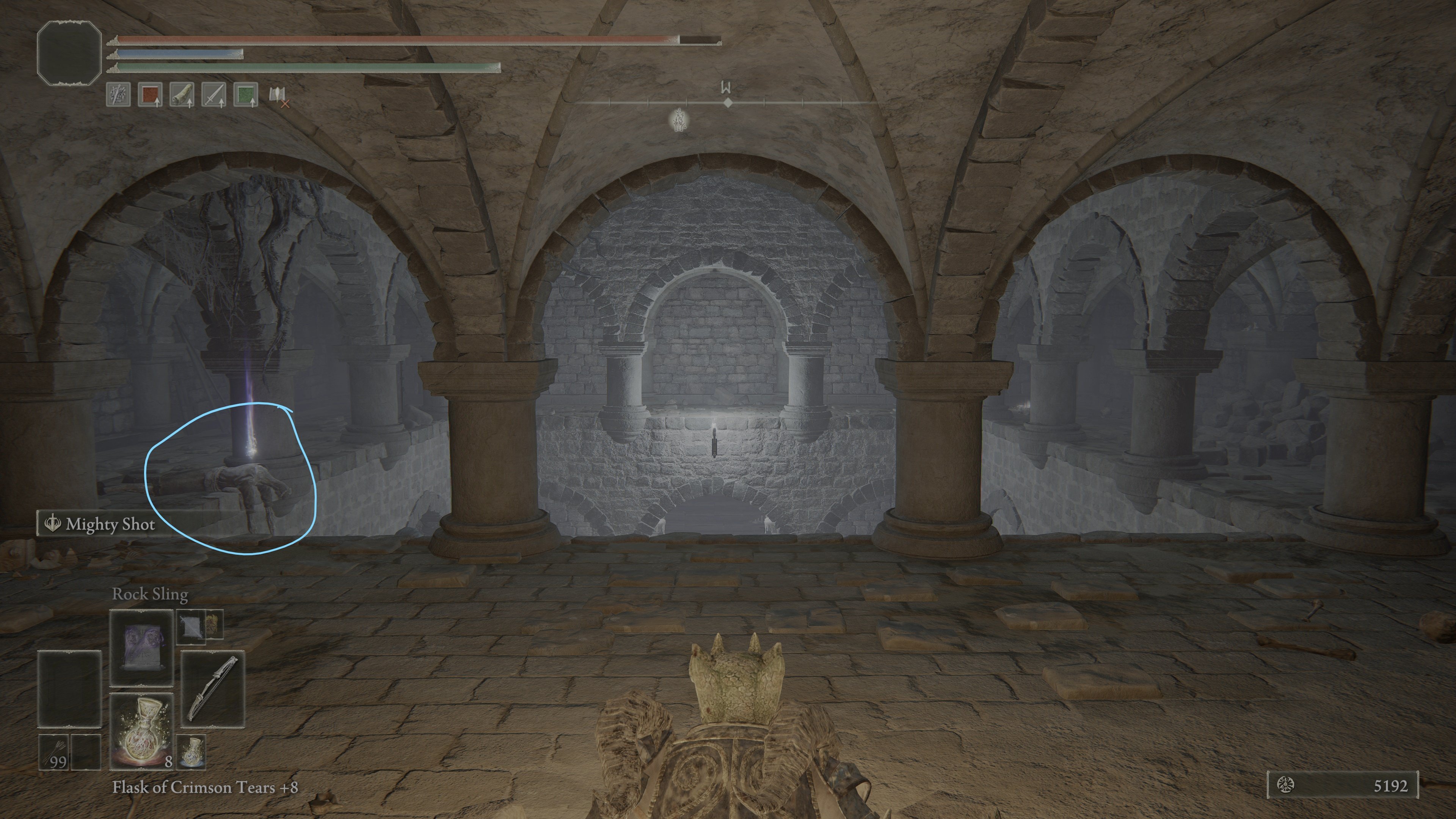 Below you is different square room with the same statue that you saw before -- this room shall be referred as (Statue Room 2). This room has multiple Exploding Living Jars, so if you have ranged weapons, it's recommended to take them out from the safety of the platform. 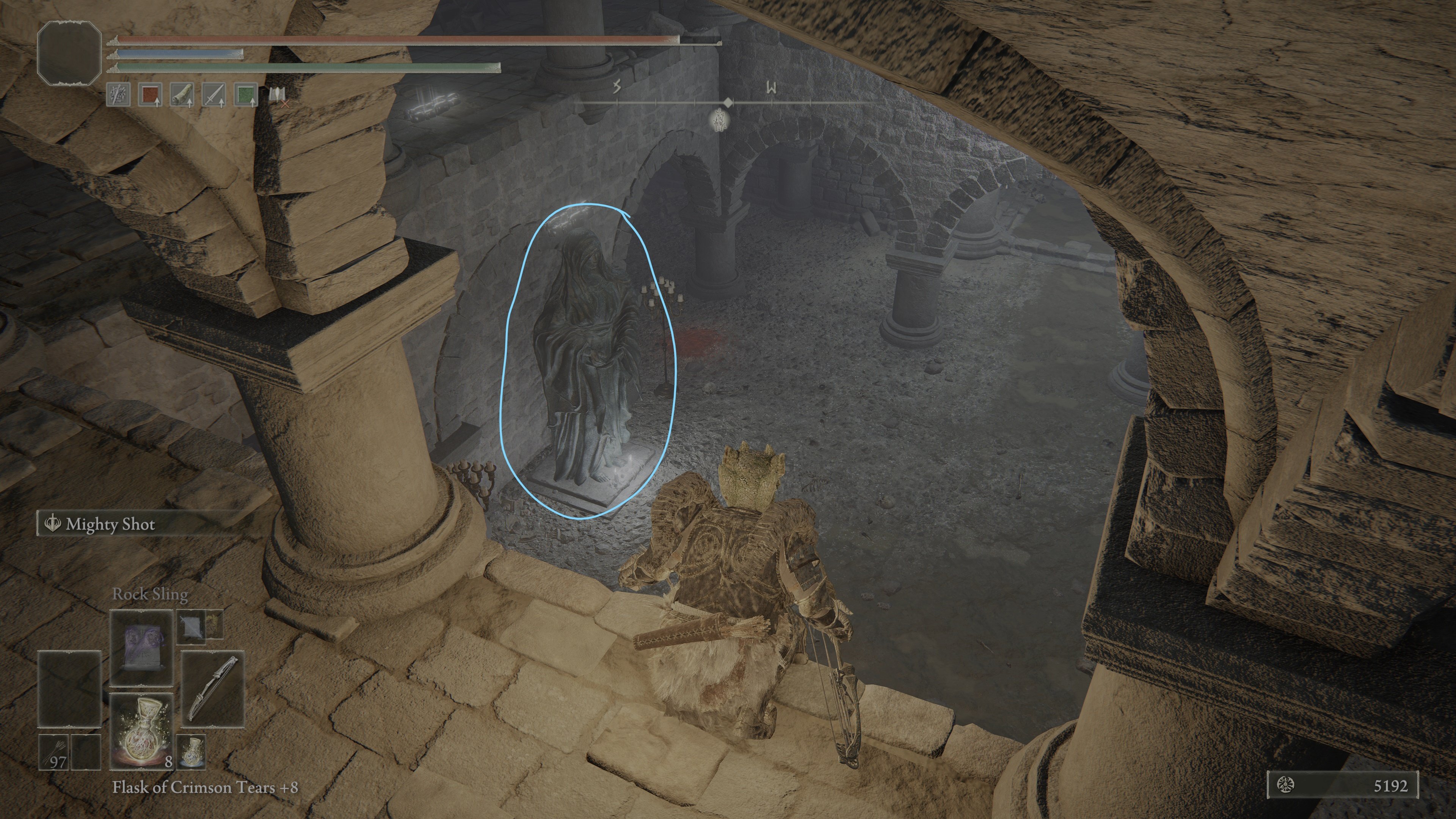 Optional Route 2: Take the path to the right when facing the statue, then pass the guillotines to find another giant living jar, guarding a Grave Glovewort (8). Make your way up again past more land squirts, including a giant variety, watch out for the pressure plate, take out another living jar and pick up Grave Glovewort (7). Again, between the squirts and the jar, there is an alcove to drop down, this time dropping down multiple ledges. You have gone in a small circle and are back to Statue Room 2.

From Statue Room 2, take the path which the statue is facing. You will find an elevator which looks identical to Elevator 2 (it has the same chain design), this is Elevator 3. 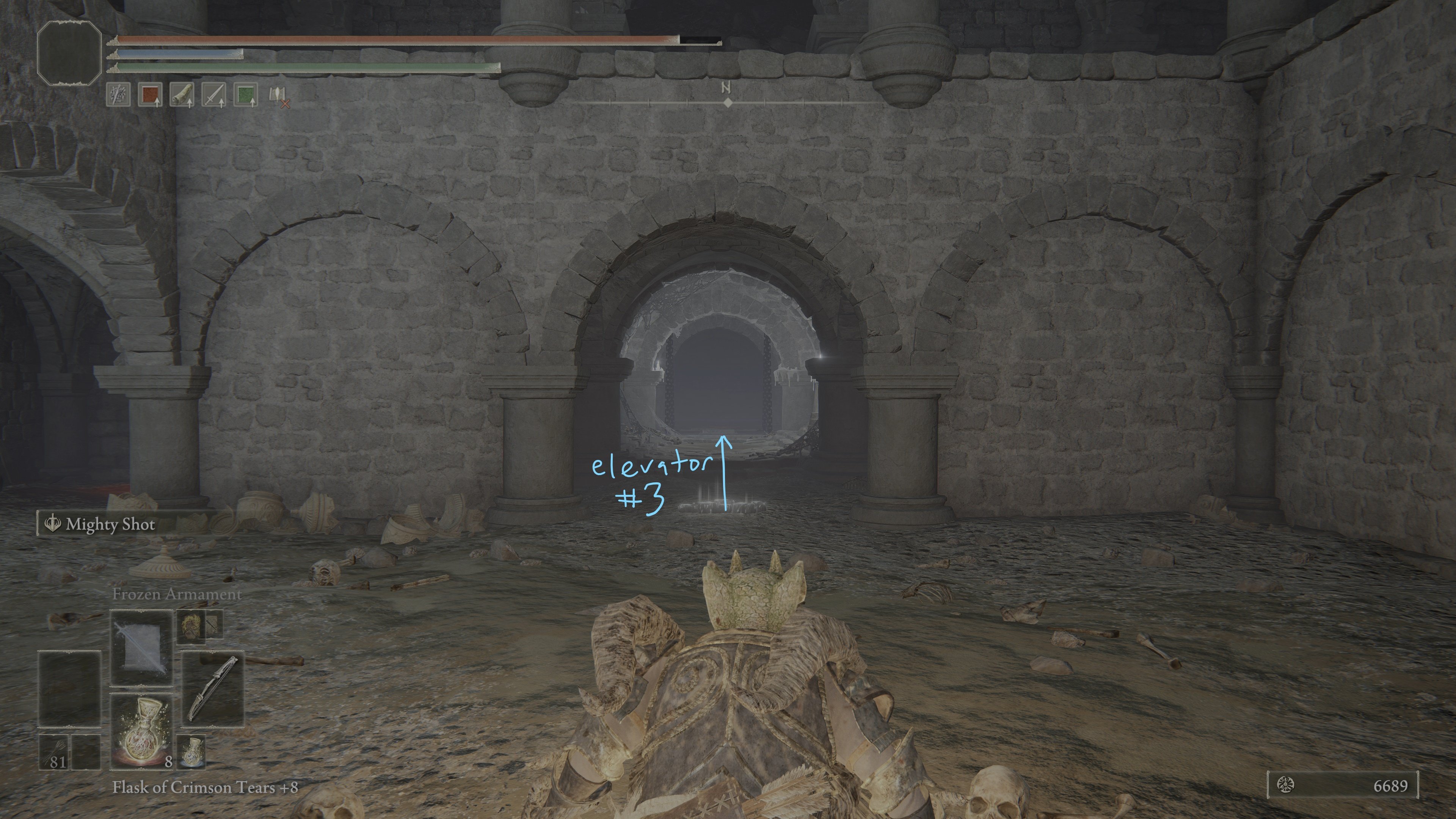 Optional Route 3: Go up Elevator 3. Take out the three imps in the following room before engaging the upcoming burial watchdog (frostbite variant). Pick up Root Resin x5 and Grave Glovewort (9), then make your way back to the elevator and take it down.

Send the Elevator 3 up and look down into the "hole" in the floor where the elevator's platform was. There is another Giant Living Jar here, as well as holes which are easy to fall into. However if you fall into them you will end up in Statue Room 1 and will have to traverse the entire loop again. 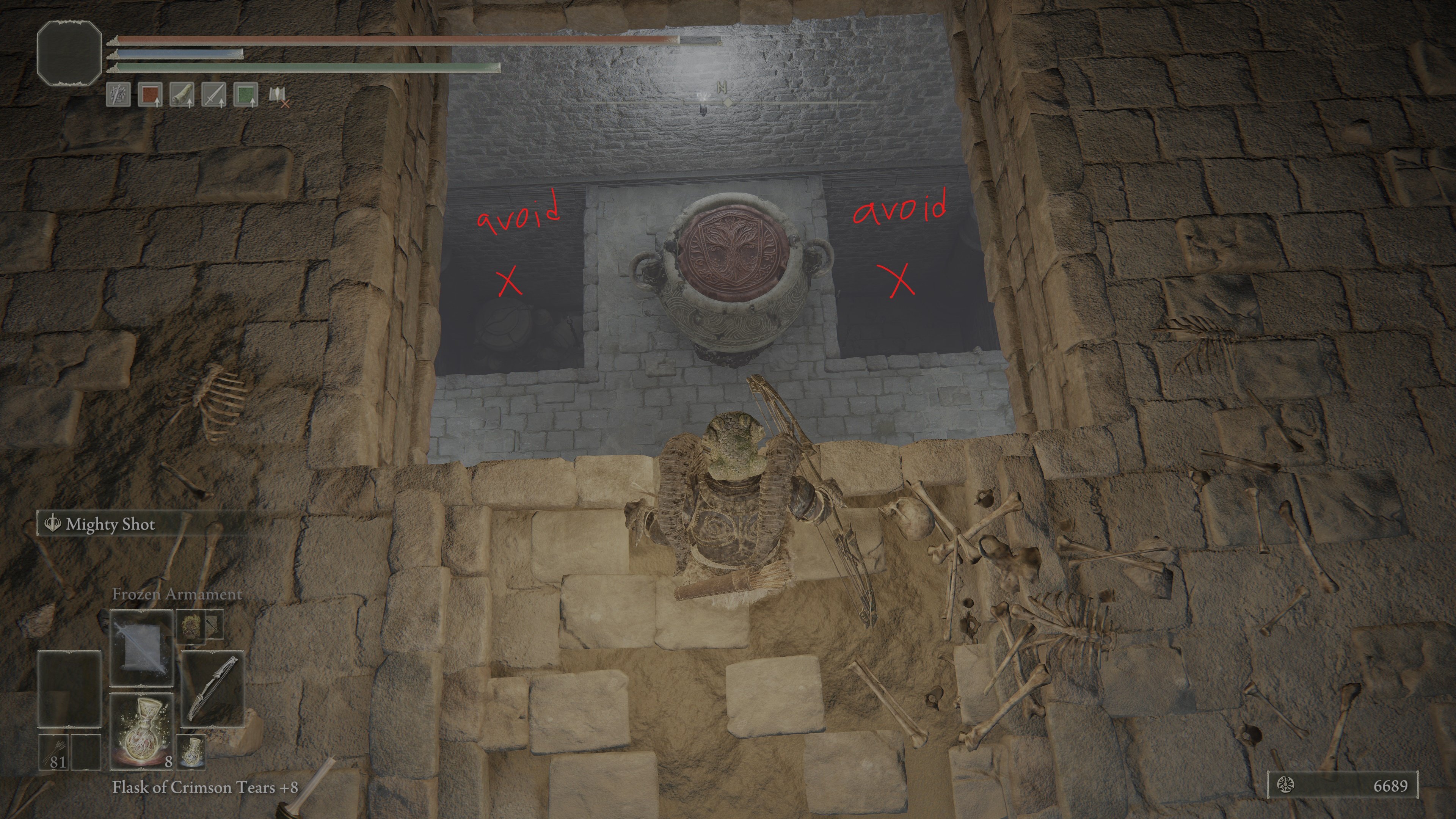 Fall down the hold and either fight the pot without falling or you can turn around and run for the opposite side of the room. There, next to a corpse holding Golden Rune (10), you will find the lever which opens the boss doors. 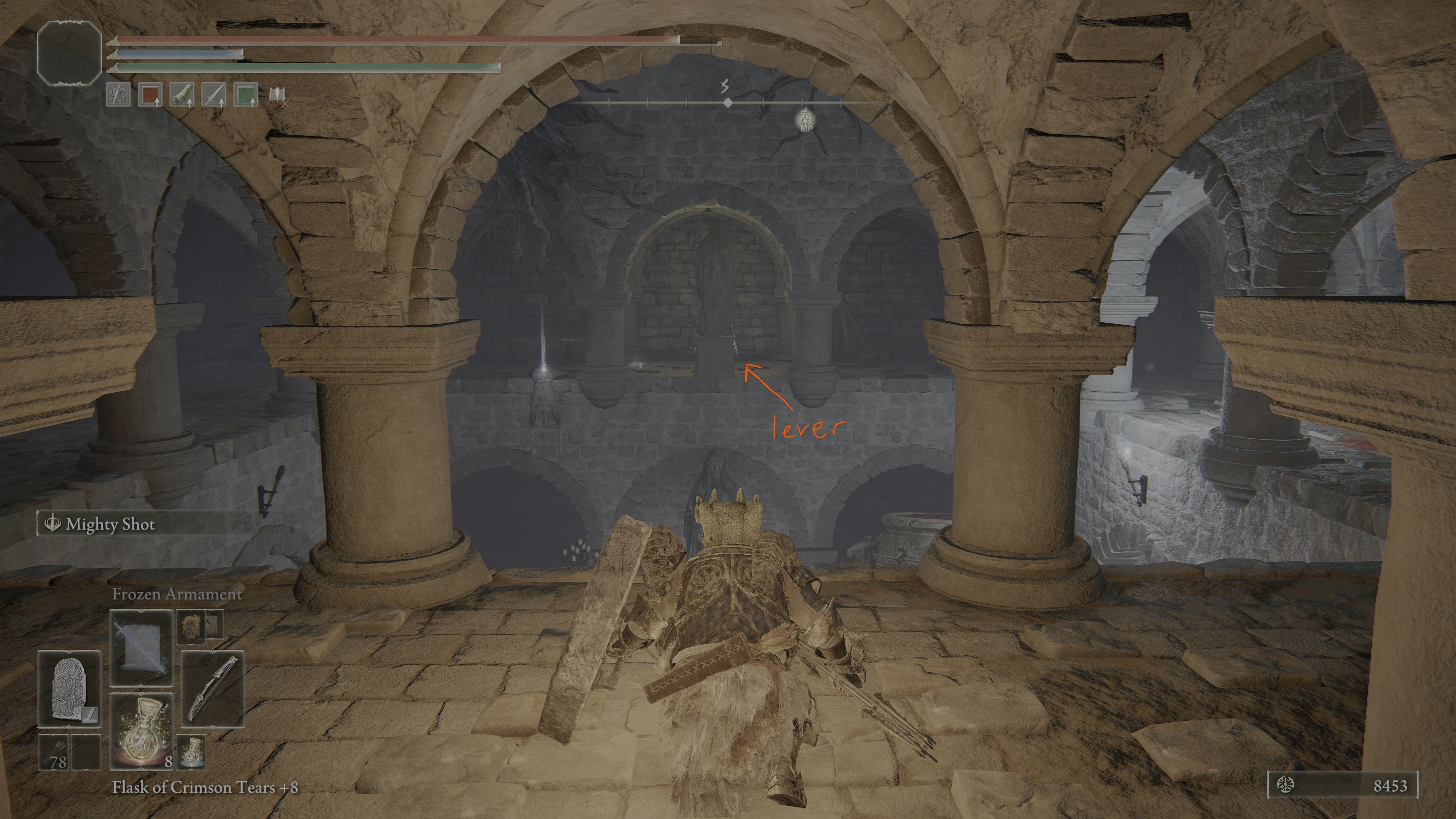 After pulling the lever, drop down into Statue Room 1, take the path the statue is facing and after a ride up Elevator 2, you should be ready to fight the boss, an Ulcerated Tree Spirit. He drops a Golden Seed and Glovewort Picker's Bell Bearing (2). A chest in the boss room contains a Deathroot. 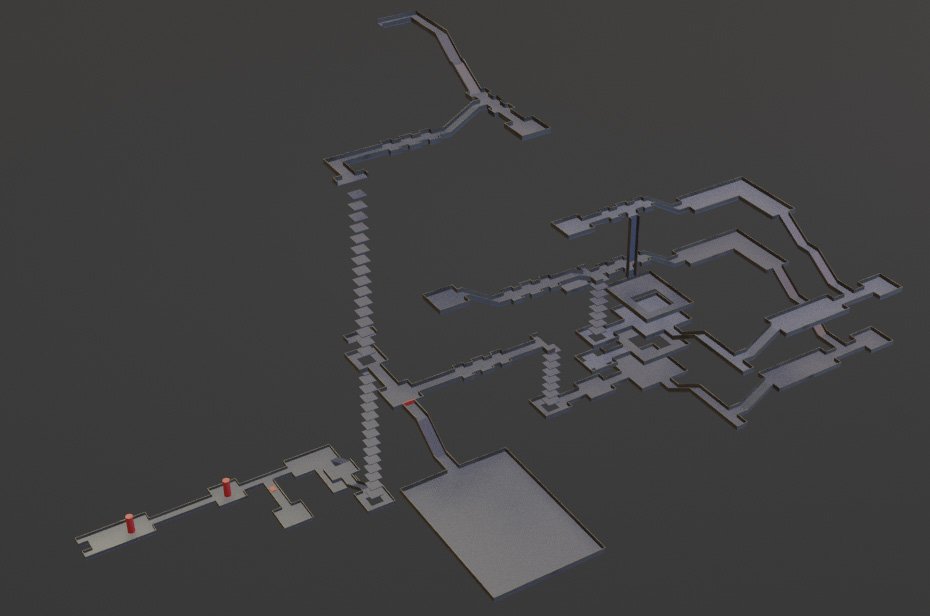