Glintstone Dragon Adula is a of Boss in Elden Ring. Glintstone Dragon Adula is a huge dragon boss is found in Liurnia of the Lakes. Adula is first encountered roaming the Three Sisters sub-region in the north. After dealing enough damage to it, the dragon will teleport to the Cathedral of Manus Celes in the south. This is an optional boss as players don't need to defeat it to advance in Elden Ring.

Adula, a devourer of sorcerers, was bested by Ranni and subsequently swore a knightly oath to her Dark Moon.

Values in Blue correspond to the Cathedral of Manus Celes Glintstone Dragon Adula.
The resistance numbers are the buildup amount to trigger it. For example, if a resistance is 100 you must deal 100 points of whatever aux buildup to trigger it. Note that these go down over time, and increase each time the effect procs.

The easiest strategy is to get on your mount and ride through his legs swiping his wings and feet as you go, trying to keep moving as much as possible. Ride away when he flies off, locate him once he lands again, and then make your way to him, taking a wider arc if he breathes fire so as not to get hit.

You can load up on HP flasks for this strategy and put on your heaviest armor, since weight does not matter when you are mounted. When the boss first spawns or when they reset their position, they get stuck in a long animation giving players a good window to get free damage in. You can attempt to use this to ease the fight by bringing the fight away from the church causing the dragon to reset its position, but not its hp bar.

This can be an extremely difficult fight for melee characters because hitting the head of the Dragon does the most damage, and it's hard to reach just like past From Software Dragon fights. Using a long reaching Weapon like the Bastard Sword, Ordovis' Greatsword, Spear, or Lance can make this markedly easier, so I suggest using one of them. If not aiming for the head, both the legs and the wings make for good accessible hitzones to aim for, the wings are especially safe from tailswipes and foot stomps.

In the beginning of the fight, Adula will undergo a lengthy roaring animation. This is your chance to do as much damage as possible and stagger him, allowing you to perform a poise deathblow.

If he raises up in the air to breath fire directly downward you need to roll away from him as fast as you can. This is a very difficult attack to dodge, and will likely kill you more than just about any other attack.

If he raises up in the air and hangs there for a second NOT BREATHING MAGIC MIST, then he will pounce on you. Make sure you wait until the last second and dodge away from him, and then attack for some easy damage.

If you end up behind him for any length of time, he will likely do a tail swipe, make sure you Block it or roll through it. They will lift their tail up and to their left before the swipe, however do not rely on this to time a roll as the dragon sometimes throws in a small delay before the swipe to catch players off guard.

When Glintstone Dragon Adula breathes fire from the ground their head is lowered and mostly stationary, you can get underneath them and hit their head during this time. Be wary of the glintstone shard breath attack as the boss will do mostly the same motion but the breath effect is different and the shards will come flying at you from whatever direction they were fire in, get ready to block or dodge them.

Sorcery easy mode: Stand inside the cathedral and use Night Maiden's Mist. Standing in the middle between the entrance and the nearby site of grace ensure their breath attack cannot damage you. Sip some tea while your favorite true damage sorcery does all the work.

Since the dragon is strong against magic, a good spell to use against it is Rock Sling, which deals good damage and can break poise. If you're feeling brave, you can use Meteorite or Meteorite of Astel to deal massive damage to it, but be wary of its stomps.

The strategy for this fight is somewhat similar whether you're ranged or melee, so you'll want to play in a similar manner avoiding the same attacks. However, it's easier to lock onto his head and range him with Glintstone Stars or Glintstone Pebble if you have either.

I highly recommend using a Shield in your off-hand so you can Block when needed in between casts. And you'll want to have more FP Flasks so that you can use as much magic as possible, which means you won't be able to heal, so try not to get hit anymore than you have to.

Remember that you can use Spirit Ashes to help you out, with someone else being focused by the boss you can freely deal damage and not worry as much about dodging attacks.

Watch out for the glintstone breath attack as the seeking shards can be troublesome to deal with, use the environment to take cover or a shield to block the attacks.

Lastly, you can fire off spells or use your Bow easily from horseback, allowing you more mobility while staying out of harms way. It might take you a bit longer to beat him this way, but it's definitely safer! 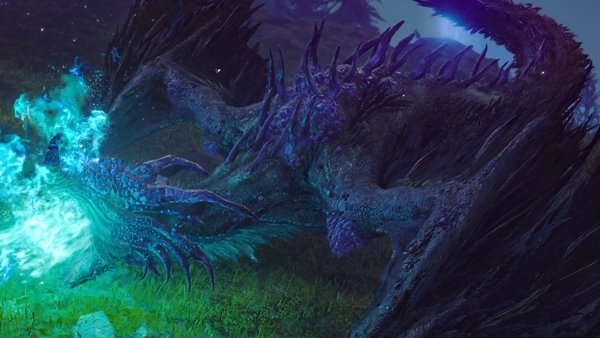