The God-Devouring Serpent is a massive coiled serpent found at the Volcano Manor in Mt. Gelmir. It was worshipped long ago by the ancient people of Mt. Gelmir, who offered up sacrifices to the powerful serpent god using a specific curved sword. The Serpent-Hunter was once used to hunt down the immoral god and it's true power manifests when faced against it.

Upon defeat, a cutscene will play and the fight against Rykard, Lord of Blasphemy will begin.

The Best Tips for God-Devouring Serpent:

Be sure to pick up the Serpent-Hunter Great Spear held by a corpse at the beginning of the boss' chamber. It has a special interaction with this boss fight in which it manifests a blade of light with every attack, significantly increasing its range and allowing players to damage both phases of the boss from outside of the magma pool he stands in.

The Serpent's attacks primarily consist of lunging strikes and bites. It can also perform a special grab animation with its jaws in which it slams you down twice. However, this move only deals damage once. The Serpent will sometimes raises its head up high and then slam its chin on the ground, sending magma flying outward in a very wide arc. This attack can be dodged through or blocked to reduce damage.

If you opted to use the Serpent-Hunter, you should constantly be poking him between his attacks. Enough hits on the head will cause the Serpent to go down briefly, allowing you a much needed window of uninterrupted attacks.

Once the Serpent is defeated, Phase Two begins with Rykard, Lord of Blasphemy. See Rykard's page for relevant information.

The God-Devouring Serpent and by extension, Rykard can be made significantly more easy by summoning the Mimic Tear Spirit while equipped with the Serpent-Hunter. The Mimic copies your current equipment and this extends to the blade of light functionality of the Serpent-Hunter. The Mimic will attack of its own volition and you will still need to dodge the boss' attacks properly but having what is essentially a second player firing blades of light at him will massively cut down the amount of time and effort required to defeat the boss.

If player wants to beat the boss without Serpent-Hunter as a melee, he should focus on inflicting Status-Effects (Frostbite and Blood loss).

If the player wants to beat God-Devouring Serpent without Serpent-Hunter, the optimal spells would be Borealis's Mist & Ekzykes's Decay (Incantation) or Rock Sling (Sorcery). Beginning of fight gives a good opportunity to apply Status Effect. 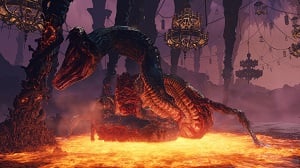