From the Altus Plateau Site of Grace, head northeast into the valley, then switch back south through a tunnel under the main road. On the other side of this tunnel, you'll see the Golden Lineage Evergaol. Activate the evergaol with one Stonesword Key to fight Godefroy. [Map Link] 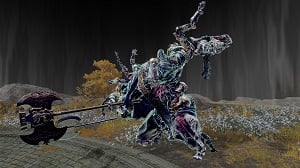