Godskin Duo is a dual-boss fight where you'll have to fight against Godskin Apostle and Godskin Noble, both simultaneously. This fight takes place in Crumbling Farum Azula. The Godskin Apostles were led by an Empyrean known as the Gloam-Eyed Queen. She and her followers were able to wield a black flame powerful enough to kill a god. However, Maliketh bested the Gloam-Eyed and locked away the source of their power, Destined Death.

This is NOT an optional boss as players MUST defeat it in order to advance to the rest of Crumbling Farum Azula. You may have a tough time fighting the two bosses in a small room. It is recommended to bring any piece of Equipment that can inflict Sleep as these bosses is susceptible to it. Putting either one of them to sleep will allow you to deal with the other alone. They drop the Smithing-Stone Miner's Bell Bearing [4] and the Ash of War: Black Flame Tornado when defeated.

A complementing pair of creatures extremely well versed in dual-battling. These beings achieve an exceptional balance in combat, resulting in a devastating synergy.

Godskin Duo can be found by entering the Dragon Temple at the northern part of Crumbling Farum Azula, at the great hall, the boss fight is triggered by approaching the short stair at the end of it. See it on the Elden Ring Map here.

While it may initially seem identical to the Godskin Apostle and the Godskin Noble Fight, there is one key difference; the Godskins have a shared health bar separate from their individual health bars, and if one of them is killed during the fight, they will be resurrected after a short period. This will continue until the total boss health bar is depleted, even if both Godskins are still alive when the healthbar hits zero. While one Godskin is alive, they may raise their hand with blackflame causing the other Godskin to resurrect before the resurrection timer depletes.

The Best Tips for Godskin Duo:

This boss fight is extremely tough to beat with most conventional methods owing to the fact that you are fighting two of the most difficult bosses together simultaneously. Additionally, each Godskin boss has an individual health bar in addition to the collective health bar labeled "Godskin Duo". Their collective bar is depleted as you deal damage to either boss, but depleting both bosses' health bars does not end the encounter. As long as the collective bar still has health, one or both bosses will re-appear and you will have to keep fighting and killing them over and over.

When only one of the Godskins has been killed, the other one can perform an attack where it creates a sigil in the air over its head to resummon the other. This move leaves it quite vulnerable, but the newly-summoned Godskin can attack immediately so be wary when taking advantage of it. If both Godskins have been killed, one or the other will respawn even without this special attack.

One way to deal with this duo is to use sleep-inducing items such as Sleepbone Arrows, Sleep Pots, Soporific Grease, or Sword of St. Trina to put one boss to sleep while you deal with the other. Once one is dead, wake the sleeping boss up and then let them re-summon their companion before putting them to sleep again. Rinse and repeat until their collective health bar is depleted. You could also summon a Mimic Tear  with Sleep Pots equipped, who uses pots often and won't purposefully wake the sleeping bosses. This saves the pots for multiple attempts and future use, at the cost of the Mimic Tear often using all its equipped pots quickly.

Another effective method is to imbue a weapon with Ashes of War: Hoarfrost Stomp and then summon your most powerful Spirit Ashes to distract one boss. Lure the other boss to one of the pillars while you stand behind it and keep spamming Hoarfrost Stomp which will deal its damage through the pillar. Be careful when they destroy a pillar, though: they can still get stuck on the base, but their attacks will go through. This strategy can be combined with the Sleep Strat above, but in that case you may want to refrain from using summons to avoid waking up the sleeping Godskin. If you summon Mimic Tear, it can also use Hoarfrost Stomp to deal massive damage to the bosses.

This boss is extremely difficult to fight for exclusively melee users. The solo strategy revolves around having both the Godskin Noble and the Godskin Apostle within view at all times. They can both throw black fireballs, so you have to be incredibly cautious when attacking one, as the other could be throwing one if they're at a distance. It is also imperative to abuse the pillars around the arena, to block one from attacking you while you attack the other. However, once either one goes into their second phase, they will gain attacks that allow them to destroy these pillars. The Apostle's phase-two attacks are mostly slow and locked to a specific location, which can give you opportunities to get in a few attacks on the Noble. Most of the Noble's phase-two attacks aren't particularly threatening, but Godskin Wheel is very dangerous. It's likely to use this attack immediately upon entering phase two if you're some distance away from it, so your best bet is to stay close during the phase transition to force it to use the easily-dodgeable Godskin Crusher instead. If you can't, run behind a pillar—although the roll will destroy the top part of the pillar, the base will still block its movement. (Note that it can roll up onto a pillar at the very beginning of the attack, so try to hide behind one a little further away.)

For magic users, using the spell Comet Azur and a bow loaded with sleep arrows will trivialize the fight. Bait the Noble away from the Apostle, begin to fire around 5 arrows until the sleep sets in. Do not attack him. Then proceed to attempt to put the Apostle to sleep close to the Noble. After both Godskins are asleep, cast Terra Magica and drink a Wondrous Physick with Cerulean Hidden Tear. Line up the Godskins, target whichever one is further away to make sure the spell accurately hits both of them, then simply charge up and fire to watch their health melt away. Keep firing, even though their bodies will disappear their hitboxes will allow further damage for a short time. One will respawn and might attempt to resurrect the other, if this happens just use sleep arrows again and finish off their healthbar. For best results do not use any Spirit Ashes as they may awaken one of the Nobles. 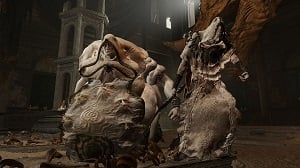