Kindred of Rot is a Field Boss in Elden Ring. These insect-like creatures wield a spear in their many arms and are found in Seethewater Cave. This is an optional boss, as players don't need to defeat it in order to advance in Elden Ring.

The Best Tips for Kindred of Rot:

Keep your positioning to the side of them and focus on one at a time while rolling through any pest thread attacks. If you want a quick fight, use spirit summons to clear one while you clear the other. If you have a shield, you can guard counter them and it will stun them giving you more opportunities to deliver hits. Be patient and wait for an opening before coming down at them with by spamming your melee attacks, giving you an opportunity to interrupt their following attacks until they are cleared. Anticipate their next action and roll back if it follows through. Repeat the pattern of waiting for an opening until they are cleared.

Either Holy Damage or Faith Builds work when going against them. They tend to take long pauses before each action. Mages have the option to use Swift Glintstone Shard, which may interrupt their next action. If significant damage was taken, roll back and create a larger separation before healing. If this is difficult, and you are willing, use spirit summons to help you since there are two of them and may be hard to separate. Keeping your distance will give you more openings and will eventually lead to their defeat. 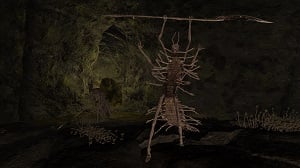