Miranda the Blighted Bloom is a Field Boss in Elden Ring. This giant flower releases clouds of poisonous pollen into the air. This is an optional boss, as players don't need to defeat it in order to advance.

The Giant Miranda Sprout is the normal enemy form of this boss. Another Miranda boss appears in the Omenkiller and Miranda Flower duo fight.

Miranda, maiden of the Flower Crucible is said to have been the very first of this breed.

The Best Tips for Miranda the Blighted Bloom:

Be aggressive: you won't be able to avoid its poison cloud in such close quarters, so you'll need to kill it before the poison kills you. Alternate hits with a Torch to interrupt its attacks and a normal melee weapon to deal damage while it's recovering. If you deal damage quickly enough, you can largely ignore the Miranda Sprouts.

Use spells that prioritize damage over casting speed: it's hard to avoid being poisoned, but the flower's attacks are mostly slow and unable to interrupt you. Inflict Fire Damage if possible—not only is the Miranda quite weak to it, it can interrupt its attacks. Just be sure to get out of the way when its Rain of Light attack starts charging up. 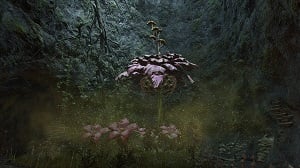