A Vicious beast that has lost all reason, attacking indiscriminately.

Misbegotten Warrior is a Field Boss found at the end of Unsightly Catacombs, together with Perfumer Tricia. See it on the Elden Ring Map Link.

It's also present in a dual bossfight alongside Crucible Knight at the end of Redmane Castle. See it on the Elden Ring Map Link.

Misbegotten Warrior can be found by reaching the end of the Unsightly Catacombs and also at the end of Redmane Castle alongside Crucible Knight,

The Best Tips for Misbegotten Warrior:

This enemy may be faced alongside another boss, so its best to fit in as many hits as much as possible. Be aggressive with your attacks and deal stance damage to get a stagger in order to maximize damage. Jump attacks on it will also work with this strategy and may result in a successful crit attack. Keep trying to circle behind him to get a clear shot for your attacks whenever it takes a brief pause between its actions. This will also take you out of its line of sight for some of its forward attacks. If you're having a difficult time, put a Scarlet Rot debuff on him or use a spirit summon so that its attack is not completely focused on you. You can also try to parry its attacks and land a frontal stab if your parry game is good.

Ranged combat against this enemy may be easier considering this enemy does not have any far range quick lunging movements and tends to run to reposition or lunge at a short distance. To quickly defeat this boss, be aggressive on your attacks while continuously moving back and around it forcing it to turn and approach to attack. If near, you can perform a jump attack to stagger it or break its guard for a crit attack. This will quickly deplete its HP, and if facing two bosses at the same time, may give you a chance to completely defeat the Misbegotten Warrior before the second boss encounter. 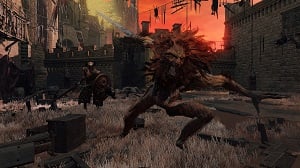