Onyx Lord is a Boss in Elden Ring. The Onyx Lord appears as a boss in both the Sealed Tunnel outside of Leyndell Royal Capital, and imprisoned in the Royal Grave Evergaol in Liurnia of the Lakes. The enemy can additionally be found as a non-boss enemy in the Yelough Anix Tunnel. Onyx Lords are a tall ancient race of humanoids with mastery over gravity magic that share a common background and appearance with the Alabaster Lords. Both instances of this boss are optional as players don't need to defeat either to advance in Elden Ring. However completing the Sealed Tunnel is required to reach Divine Tower of West Altus.

A race of ancients with skin of stone who were said to have risen to life when a meteor struck long ago. They were called lords in reverential fear of their destructive power.

The first Onyx Lord encountered can be found in Liurnia of the Lakes imprisoned in the Royal Grave Evergaol. After clearing Caria Manor, head out of the boss room and loop around the north end of the manor moving to the east. [Map Link]

The second Onyx Lord can be found at the end of Sealed Tunnel. The dungeon has several illusory walls that need to be attacked or rolled into in order to progress down to the boss area. Clearing this dungeon will grant the player access to the Divine Tower of West Altus.

Non-boss Onyx Lord enemies can be found in the Yelough Anix Tunnel.

The Best Tips for Onyx Lord:

Onyx Lord only has a few moves in his repertoire and it is relatively easy to discern his patterns. Consider fighting him on the outer edges of the arena as the center has uneven terrain which can cause his meteorites to impact with the ground near you, dealing splash damage.

Onyx Lord has three main attack patterns: Meteorite, Slice and Dice, and Gravity Well. He will rarely diverge from these attacks. Meteorite has a very long animation and should be exploited. After he plunges his sword from the ground, you can try and get behind him for one or two hits. The meteors don't track very well at melee range and they are unlikely to hit you this way. His Gravity Orb attack comes out very quickly, has very good tracking and requires precise timing to dodge. His Slice and Dice move begins with a diagonal dash to his left as he slashes upwards followed by a large, sweeping slash in the opposite direction. Dodging through the first slash towards his right side should prevent the second slash from hitting you and will position you behind him for a quick counter.

Overall, his Meteorite and Slice and Dice moves are his most punishable for melee players.

Ranged players have the added advantage of being completely out of range of his sword plunge into Meteorite summon. Do note that he will sometimes charge towards you before he performs the plunge but the AoE is easy enough to avoid. The meteorites themselves have a slow travel speed and ranged/magic users should take this time to get a few hits in while they get ready to sidestep the projectiles. If you maintain your distance, the first slash of his Slice and Dice attack should land nowhere near you. However, this also makes you an easier target for the second slash. Try to dodge diagonally to the right after you see the first slash and then punish his recovery time accordingly. 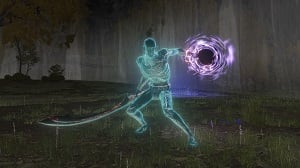 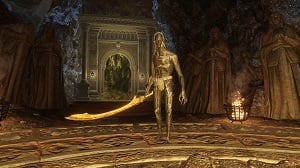