Perfumer Tricia is a Boss in Elden Ring. The Perfumer Tricia boss encounter is in fact a duo boss fight as she is accompanied by a Misbegotten Warrior with his own boss health bar. Tricia is a spellcaster who prefers to remain at range and carries a shield to block most melee attacks. The Misbegotten Warrior is an extremely agile creature wielding a greatsword. This duo is found at the end of the Unsightly Catacombs in Mt. Gelmir. This is an optional bossfight, as players don't need to defeat them in order to advance in Elden Ring. However, doing so yields useful Items and Runes.

Tricia was once known as a healer who dedicated her efforts to treating Misbegotten, Omen, and all those seen as impure. When her efforts failed, she was their companion as they died, watching over them to ensure that they could pass peacefully, free of pain.

A tale akin to the origins of the deathbed companions.

Perfumer Tricia is a Field Boss found inside the Unsightly Catacombs.

Perfumer Tricia and the Misbegotten Warrior can be found at the end of the Unsightly Catacombs, after unlocking the final door at the lowest level. These Catacombs are found beneath the Perfumer's Ruins near the western edge of Mt. Gelmir. The entrance is in the southwest cliff face below the ruins and requires a Stonesword Key to unlock. See it on the Elden Ring Map Here.

The Best Tips for Perfumer Tricia:

This encounter has a steep difficulty due to the very aggressive, very powerful Misbegotten Warrior who will always close the distance. Tricia herself does not pose much of a threat as she will attempt to maintain distance and cast spells that hit in a wide arc from medium range. When the fight begins, summon your best Spirits in order to distract the Misbegotten and then immediately get up close to Tricia and pummel her with fast melee strikes. This will cause her to pull up her shield which does little to reduce damage from your constant barrage. It is also exceedingly easy to break her stance, setting her up for a highly damaging critical attack. Try to get rid of Tricia before your summons expire or get killed.

For the Misbegotten Warrior, do not attempt to create distance as the arena is relatively small and he has leaping attacks that travel a great distance. Whenever he swings horizontally, dodge through the attack utilizing your roll's iframes instead of dodging backwards. Dodging backwards increases the time his sword's hitbox overlaps with your hitbox, causing a hit. This is especially important since he will likely have you with your back against the wall most of the time. Always try to get behind him and hit him once or twice. Do not get greedy. For his vertical slashes, always dodge sideways. In fact, the only time you should be dodging backwards is when he leaps to perform his slam attack, but even then, you should be moving diagonally.

Similarly to the Melee Strategy, do not attempt to create distance against the Misbegotten Warrior. Dodge through his attacks and use basic, quick-firing spells such as Glintstone Pebble when his back is turned. Consider using Melee-based Glintstone sorceries as well as these are typically cast much faster as a tradeoff for having little to no ranged capabilities. Just as with melee users, use a Spirit summon in the beginning and take Tricia out immediately to get her out of the way and then focus on the Misbegotten.

If not, you can attempt to separate them in the arena and choose to focus on the Misbegotten Warrior since Tricia's moveset is vert slow-moving and limited. It is recommended that Tricia be kept to the middle while you face the warrior towards the edges of the arena so that you can use the pillars lining the walls to block Tricia's perfume. Focus on one before the other. Once you get close to Tricia, it should be easier to clear her. 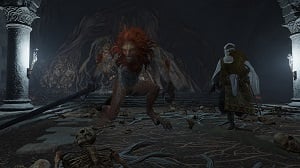