Radagon is a tall, fractured god wielding the hammer that shattered the Elden Ring, and is found in the Elden Throne. He was previously married to Rennala, but became Queen Marika's consort after Godfrey was exiled from the Lands Between. Completing Brother Corhyn & Goldmask's quest to a certain point reveals that he is the "other half" of Queen Marika. Despite being of one body, the two do not share the same will, as evident from Radagon attempting to repair the Elden Ring after Marika had shattered it.

This boss is NOT optional as players must defeat him to reach the end of Elden Ring. As with many endgame bosses, Weapons, Incantations, and Spirit Ashes capable of inflicting Black Flame are highly recommended as they deal damage over time based on the boss' maximum HP. Be aware that depleting his health completely immediately takes you into the cutscene leading to the final boss fight - Elden Beast. If you die to the Elden Beast, you are required to fight Radagon again before reaching it.

As the husband of Rennala of Caria, the red-haired Radagon studied sorcery, and as the husband of Queen Marika, he studied incantations.
Thus did the hero aspire to be complete.

Radagon of the Golden Order

Radagon of the Golden Order is a God Boss found in the Stone Platform.

Radagon of the Golden Order can be found by entering the glowing wall after defeating Hoarah Loux, Warrior.

Upon defeat, a cutscene will play and the fight against the Elden Beast will begin.

The Best Tips for Radagon of the Golden Order:

At the beginning of the fight, you can run toward him and safely make an attack or two (depending on weapon speed).

Radagon is vulnerable to poise damage. If you're consistent about applying it, then he can be poise broken 3 times in this fight, giving you a much-needed break to reapply buffs, drink flasks, or stack more damage. Heavy thrusting swords like Dragon King's Cragblade can guard counter quickly, which is useful since taking advantage of his openings is much more difficult with slower weapons like Bloodhound's Fang. Most of his moves have long recovery time, which will let you get in a jumping heavy attack or charged attack.

Use Godskin magics, like Black Flame Blade. As stated in the Godskin Prayerbook, Godskin incantations were created to kill Gods such as Radagon.

The biggest melee threat in Radagon's arsenal is his grab. When his arm starts glowing, he starts readying a lunge grab, which has limited tracking and a generous hitbox. In testing, this move killed from full health at 50 Vigor, using Lionel's Set and damage reduction talismans. His grab has a medium lunge that can be outrun. Begin sprinting away as he starts his grab, and it will never hit you. Alternatively, his grab can be reliably dodged by rolling into him.

Recommended talismans for melee users: Dragoncrest Greatshield Talisman, Haligdrake Talisman, Green Turtle Talisman. This combo will let you tank a few of his hits with as little chip damage as possible. He'll often hit you even if you roll past him, thanks to his backswing, so it's important to keep as much health and stamina as possible to follow up on his openings. The Crimson Seed Talisman will stretch each flask further in this marathon of a final boss.

At the beginning of the fight, you can hit him with two fast- or medium-casting spells (although sometimes he parries the second), or one slow-casting spell.

When fighting Radagon at range, there are two major threats - maybe three. The first is his big ground slam. This is easily identified by him leaping into the air and hovering for a bit. Reflexes say dodge when this hits the ground but that is the last thing you want to do. It's not so much a typical AoE attack as it is a nova. So, the attack spreads out. You want to dodge after he hits. It might take a try or two to get this one figured out. The second major one is when he charges up his hammer and slams it three times in a row for big fan-shaped explosions. Much like the first, this one has some deceptiveness built in. It is not a 100% fan that hits everywhere it lights up. It actually fires out several trails, one of which goes right towards you. This becomes super easy to dodge once you realize this because all you need to do is dodge backward (or forward) at 45-60 degree angle and he'll miss with all of them.

One note about the first slam is that it might feel like a good time to get in some damage, and it is, but don't get caught with your pants down and in a big animation. Even if he looks like he might attack a spirit or friend, he has a tendency to change targets while up in the air and gives little warning!

The third major thing to watch out for is his lightning bolt. However, this one doesn't have much in the way of trickery, but getting the timing down might take a try or two.

Once you can reliably avoid these three things the rest of it is pretty easy in terms of defense. The biggest trouble is finding the time to get the hits in. Something with a quick animation is your friend, but he is also prone to losing/switching aggro so you can hit him with something big here and there. He also seems to maintain a fairly steady tempo, so his wind-up/wind-down/recovery between attacks feels consistent and can help you get an idea for when to attack.

As for what he is weak to? Good question! Testing would be required, but he seems to take a lot of damage from most things. Glintstone Icecrag hits him really hard, and Stars of Ruin can do some work if you need a bit more range. Hitting him with Ranni's Dark Moon when he loses aggro can give you a little boost in damage going forward thanks to its magic resistance reduction. Quite frankly, he takes a lot of damage and could even be considered fairly squishy, but he has a tendency to take you out of the fight before you can capitulate - or he'll do enough damage to you that you go into the next round without as many resources as you may need.

One thing I did find is that Black Knife Tiche (bless her soul) is as good against him she is against most bosses. Her rot-blade or whatever nonsense she flings around can easily take 20% of his Hp by the time its DoT runs out, so she is a good one to use. She's also durable enough that she will last through both fights without issue.

With a little luck and some good timing, you can eliminate Radagon inside a minute, if not quicker, leaving you with just the follow-up fight to deal with. As a sorcerer, that one feels like a lot bigger threat!

For incantation users, Black Flame and Lightning Spear are both effective punishers. Radagon also seems to be vulnerable to the Frenzied Flame spells. Frenzied Burst is highly recommended due to it's long range. For the second phase against Elden Beast, Pest Threads (at close range) deals heavy damage to large targets such as the Beast. 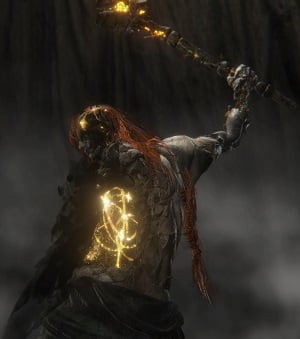 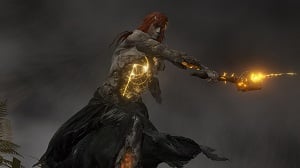