From the beginning of Gelmir Hero's Grave, head down the first chariot hall and fall of the ledge after passing a Skeletal Archer to your right. Keep to the corner as you're falling to land safely on a wooden plank, then wait for the chariot to pass beneath you and drop down on top of it. Ride it to the bottom of the lava-filled pathway, then jump off and duck into the alcove to the north that contains a dead body with an item. Climb the ladder in this alcove, then head north to the fog gate leading to the Red Wolf of the Champion. [Map Link] 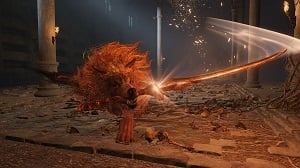 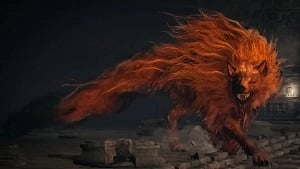