Though not a demigod, Rennala, Queen of the Full Moon is one of the many shardbearers that players may need to defeat in order to advance the story forward. She is found in the Academy of Raya Lucaria. Rennala is a powerful sorceress and the current head of the Carian Royal family. The royal family used to govern the academy, but when Radagon left Rennala to become Marika's second consort, she became weak and the academy's scholars rebelled against them. Rennala was then locked in the Grand Library with her amber egg.

You don't need to fight Rennala to progress into the next area of Elden Ring, and can instead opt to face her at a later part of the game. During her first phase, focus on attacking the juvenile scholars with the golden aura to drop her shield. In her second phase, take advantage of the fact that she staggers easily. She drops the Remembrance of the Full Moon Queen and Great Rune of the Unborn when defeated. She also turns into an NPC that helps you respec your character.

Rennala, Queen of the Full Moon is a Legend Boss found in the Raya Lucaria Academy in Liurnia of the Lakes.

Rennala, Queen of the Full Moon can be found after taking the elevator of the Raya Lucaria Academy. Map Link

Values in brackets correspond to Phase 2.
The resistance numbers are the buildup amount to trigger it. For example, if a resistance is 100 you must deal 100 points of whatever aux buildup to trigger it. Note that these go down over time, and increase each time the effect procs.

Results of Defeat on World

The Best Tips for Rennala, Queen of the Full Moon:

The first part of the fight, Rennala is in a protective golden bubble floating above while the room is full of students that cast diverse spells. Some will throw books at you as projectiles and other will breathe fire. The students that are throwing books at you will be singing and have a golden aura around them. These are the ones that “sustain” Rennala's bubble. **There may be a bug in the game that causes the 3 singing students to appear** Attack them to break their concentration, however killing them is not necessary. Once you've disrupted three of the golden bubble students, Rennala will drop to the ground. Punish her once she is on her knees. Don't get too greedy, as soon as light emerges from her, go back as fast as possible to evade her AOE attack. She will raise a few students to turn into gravestones that she will charge up and launch at you, signaled by the stones floating in the air and her hand turning white as she waves it at you (students can be killed before they rise by ranged/jumping attacks). This also makes a distinct noise. Take cover behind one of the solid pillars near the bookshelves in the room, not the bookshelves themselves as they'll be destroyed by the gravestones.

After executing this process enough times to exhaust her health bar, Rennala will fall to the ground and a cutscene will begin. This begins her second phase.

The second phase is against Rennala herself, this time she will cast a few spells. She starts the fight by blasting a powerful energy blast towards you. This can be dodged with a well-timed roll, or by running at about a 45-degree angle toward her. Be specially aware of her summons. She will cast them when her health bar starts to get low. She will impale her staff on the ground, a pattern will be drawn on the water and one of three creatures will appear. Don't let any of those caught you off guard. They don't last until killed, but remain for a few attacks and leave the battlefield. It is not worth trying to fight them; running them in a circle will eventually despawn them. The dragon she summons will breathe fire at you once, make sure to gain a lot of distance from this fire as it's incredibly powerful. If you're far enough back from the dragon it will launch up into the air and attempt to ground slam you. This can be avoided by running TOWARD the dragon/Rennala, as the dragon will go over your head and land behind you.

She may summon a Troll, a pack of four Lone Wolves, a Bloodhound Knight, or a Dragon.

If you're using a Bow just fire away, since Physical Damage is good here. Range down the students in Phase I.

In Phase II clear the adds with melee attacks if you're a mage, and Bow if you're an Archer and then attack the boss, repeating this pattern.

Rennala is very resistant to magic, so the best choice against her is Rock Sling, to which she is vulnerable. But bring a sword for hitting the glowing students, locking the right one can be a pain.

In phase 2 spirits are very helpful, since they distract her. Keep range (running is often better than dodging), and wait for an opening after her attacks, fireing Rock Sling at her. With decent INT and the Meteorite Staff she will go down quickly. But beware of her summons since they break lock.

Rennala, Queen of the Full Moon Lore, Notes & Other Trivia

Come, Oath-sworn giant/dragon! (Spoken when summoning a giant or dragon during her second phase)

Have no fear, I will hold thee. Patience.

Ye will be countless born, forever and ever.

(Note: While there is more dialogue in this cutscene, it is spoken by Ranni the Witch.

Upon my name as Ranni the Witch.
Mother's rich slumber shall not be disturbed by thee.
Foul trespasser.
Send word far and wide.
Of the last Queen of Caria, Rennala of the Full Moon.
And the majesty of the night she conjureth.)

Be not afeard, little culver. (Phase 1)

Thy fate lieth under my moon. (Phase 2)

Weave thy night into being.

(Note: For Rennala's dialogue once she becomes an NPC, see Rennala, Queen of the Full Moon (NPC)) 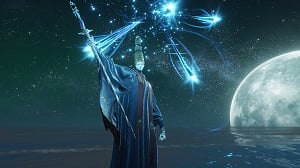 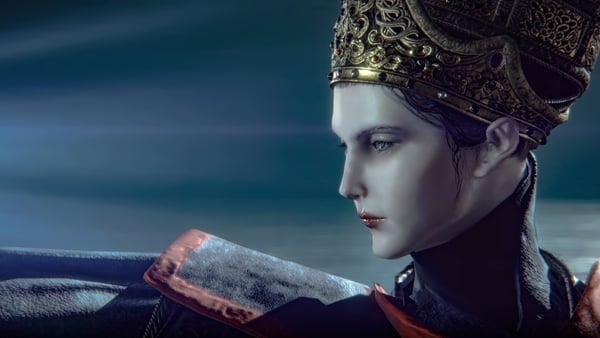 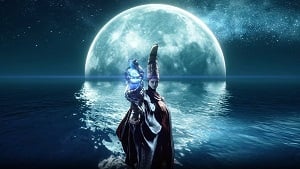 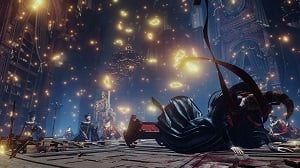