Rykard, Lord of Blasphemy is the true form of the God-Devouring Serpent, whose body has been taken over by Rykard. Players can fight him at the Volcano Manor in Mt. Gelmir and is one of the shardbearers players may fight to access Leyndell. He was revered by his supporters for seeking to overthrow the Golden Order. However when he offered himself up to the serpent in a pursuit of immortality, most of his followers turned on him and sought to bring him down with the Serpent-Hunter.

This is an optional boss as players don't need to defeat it to advance in Elden Ring. Rykard, Lord of Blasphemy is first fought in his First Phase as the God-Devouring Serpent. Unlike most boss phases, the God-Devouring Serpent has its own health bar which must be depleted before you can challenge the second phase. Note that dying to his second phase as Rykard will require you to defeat the serpent once again. Defeating Rykard nets you Rykard's Great Rune and the Remembrance of the Blasphemous.

Join the Serpent King, as family...

Together, we will devour the very gods!

Rykard, Lord of Blasphemy is a Demigod Boss found in Mt. Gelmir.

Rykard, Lord of Blasphemy can be found by entering the lobby of Volcano Manor and taking a right down the corridor. Unlock the first door on the right using the Drawing-Room Key and revealing the illusory wall in the back-right corner by attacking. Follow the hallway left and keep going straight until you reach a set of stairs. Head down the stairs and follow the path past the enemy to find the Prison Town Church site of grace. Open the doors in the back of the church, head right and across the rooftops and jump down in the direction of the fog door. Take a left at the fog door, follow the path down to the lizard enemy and take the path right to find a ladder against the building. Climb the ladder and enter the open window in the back of the steeple. Drop down and head downstairs in the south part of the building. Go north and take a right and you will find the Guest Hall site of grace. Outside of that room to the east, open the set of doors, take a right and head down the ladder. Follow the path east and up the stairs to the area full of cages. Step inside the elevator cage next to the fireplace, go up, and then head up the stairs to find the lever shortcut and a church containing the Godskin Noble. Defeat this enemy and head up the elevator to the right. Follow the path around, head over the bridge with the slugs on it, and drop down to the path on the left. Follow the path up, jump on the rocks over the lava lake, and head up the mound into an open window. Open the door on your right, head up the stairs into the room and take a right to head down the corridor. Go past the whip-wielding Man-Serpent into the room and open the door on the right. Head up the stairs and through the door on the left and enter the portal. From there, head south into the boss room where Rykard, Lord of Blasphemy resides.

Alternatively, after completing all three contracts for Tanith at the Volcano Manor, she will ask if you would like to see him. Accepting will have her teleport you directly outside of his mist gate. See Rykard, Lord of Blasphemy's location on our Interactive Map.

If you don't wish to partner with Tanith, you can alternatively follow Patches' directions, and get transported to Volcano Manor through the Abductor Virgin at the bottom of the wheel in Raya Lucaria Academy. Once you spawn, there is an area on the ledge behind you that you can safely drop down into the lava. Follow the wall to solid ground. Continuing forward you'll find an elevator cage that leads up to a platform. Another elevator cage will be straight ahead, take it. After taking this elevator,  move forward, and up the stairs, where you will find the church containing the Godskin Noble. From here the directions are the same as above.

The Best Tips for Rykard, Lord of Blasphemy:

Rykard is first fought in his first phase as the God-Devouring Serpent. See the serpent's page for relevant details. This section pertains to Rykard in his second phase as Rykard, Lord of Blasphemy. Be sure to pick up the Serpent-Hunter Great Spear held by a corpse at the beginning of the boss's chamber. It has a special interaction with this boss fight that manifests a blade of light with every attack, significantly increasing its range and allowing players to damage both phases of the boss from outside of the magma pool he stands in. The spear has a three-stab light combo with escalating damage, a two-move heavy slashing combo with slightly increasing damage on the second hit, and a two-attack special move that has a long wind-up and costs FP.

Success in the Rykard boss encounter hinges on your ability to manage the multiple area effects as well as the boss's wide-arcing swings with his blade. In general, you should always dodge towards the side his sword is coming from because Rykard is a large boss with very slow swings. Dodging in the same direction that his weapon swings towards will increase the time his sword's hitbox overlaps with yours, causing a hit and each hit from Rykard is extremely painful. There is also a lot happening in the background, with debris falling all over the place. While these will not always deal damage, they can obscure your vision as Rykard is about to attack. Remain vigilant and always keep vision on the boss.

Rykard is a very slow boss and has plenty of openings in between his attacks for at least one poke with the Serpent-Hunter. There is no need to be greedy and you should prioritize being on the move, learning his patterns and dodging. Once you have his patterns down, you can consistently poke him in between almost every movement. Furthermore, being hit in the head with the Serpent-Hunter enough times will cause him to go down briefly, giving you an even bigger opportunity to deal damage.

While in his second phase, he will sometimes raise his sword up high to his side, appearing to empower himself. Dozens of large flaming skulls will then come raining down from the sky, with the bulk of them homing in on you. At this point use the Great-Serpent Hunt skill in order to stagger him and interrupt the casting, as it takes a good 3-4 seconds before going off. These skulls explode after a short delay upon reaching their target or impacting with the ground. Time your dodges or sprints properly to avoid damage. This phase persists for a long time and Rykard will continue with his regular moveset as the skulls rain down. If not killed after a while, he will end this phase by raising his sword up high with both hands, channeling the flames in the sky into the blade, culminating in a giant overhead cleave.

Rykard can be made significantly more easy by summoning the Mimic Tear Spirit while equipped with the Serpent-Hunter. The Mimic copies your current equipment and this extends to the blade of light functionality of the Serpent-Hunter. The Mimic will attack of its own volition and you will still need to dodge the boss' attacks properly but having what is essentially a second player firing blades of light at him will massively cut down the amount of time and effort required to defeat the boss.

Though there is a weapon provided at the entrance of the arena, you can still fight Rykard with other weapons if you want. With melee weapons, it's best to use frost weapons since that's a weakness of his, but using bleed works too. The magma under him doesn't deal much damage so with a bunch of health flasks and health you can easily tank through it (provided your armor and/or resistances are high enough). Get right up close and hit his body. The only downside to this is that you will take constant chip damage due to the magma you're standing on (sometimes cancelling your attack mid animation), and it'll be hard to see what attack he's doing. He also will keep sliding away, especially in phase two. A plus is that he won't be able to hit you much when you're there.

If the player wants to beat Rykard without Serpent-Hunter, the optimal spells would be Borealis's Mist & Ekzykes's Decay (Incantation) or Rock Sling (Sorcery).

Join the Serpent King, as family... Together, we will devour the very gods!

Now, we can devour the gods, together!

No one will hold me captive. 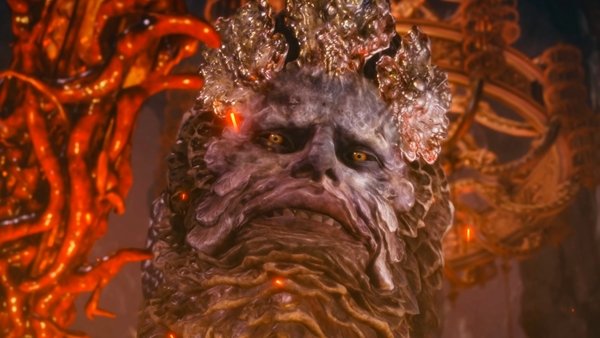