Sage's Cave is a Location in Elden Ring. The Sage's Cave is found in Altus Plateau, west of Wyndham Ruins, under the cliffs. The cave's entrance can easily be reached by heading northwest from the Abandoned Coffin site of grace, past a large cluster of Poison Flowers.

Sage's Cave can be found in the western cliffs of Altus Plateau, just south from Wyndham Ruins. It is only accessible from the south of Altus Plateau, by traveling north from the Abandoned Coffin site of grace. See the exact location on the Elden Ring Map. 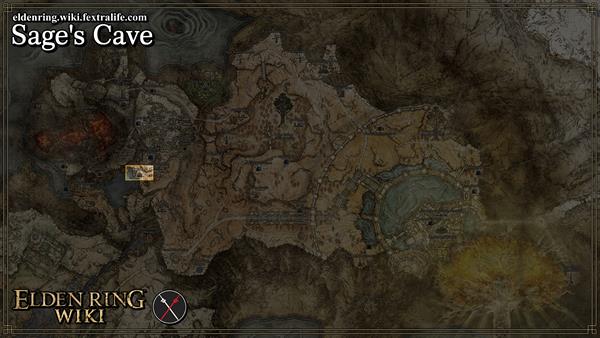 Past the Site of Grace, make your way forward until you reach an apparent dead end. There is an illusory wall here. 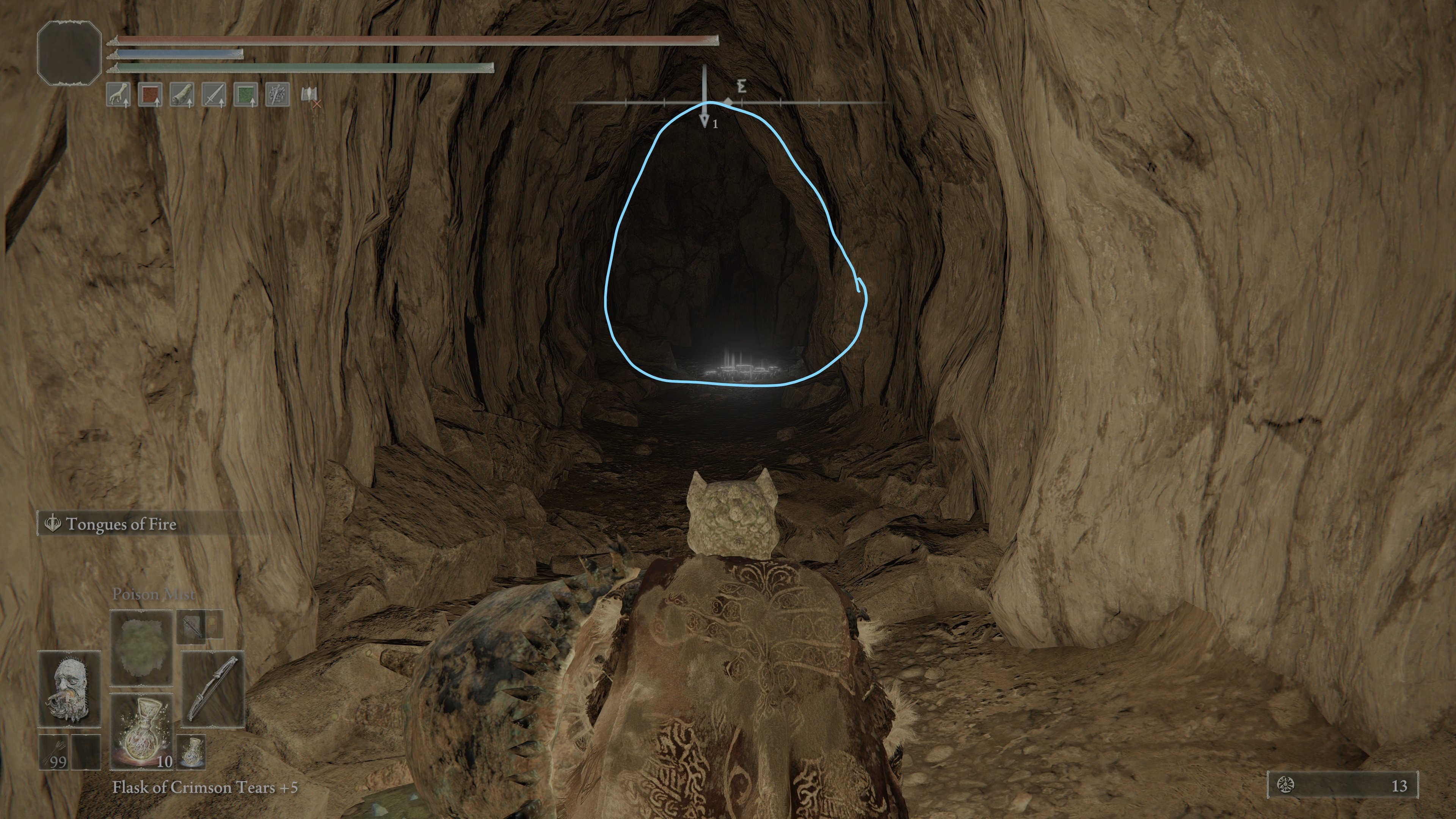 Go past until you encounter a skeleton near a waterfall. Passing another illusory wall to the right, you will find two chests containing Lost Ashes of War and Rejuvenating Boluses x5. 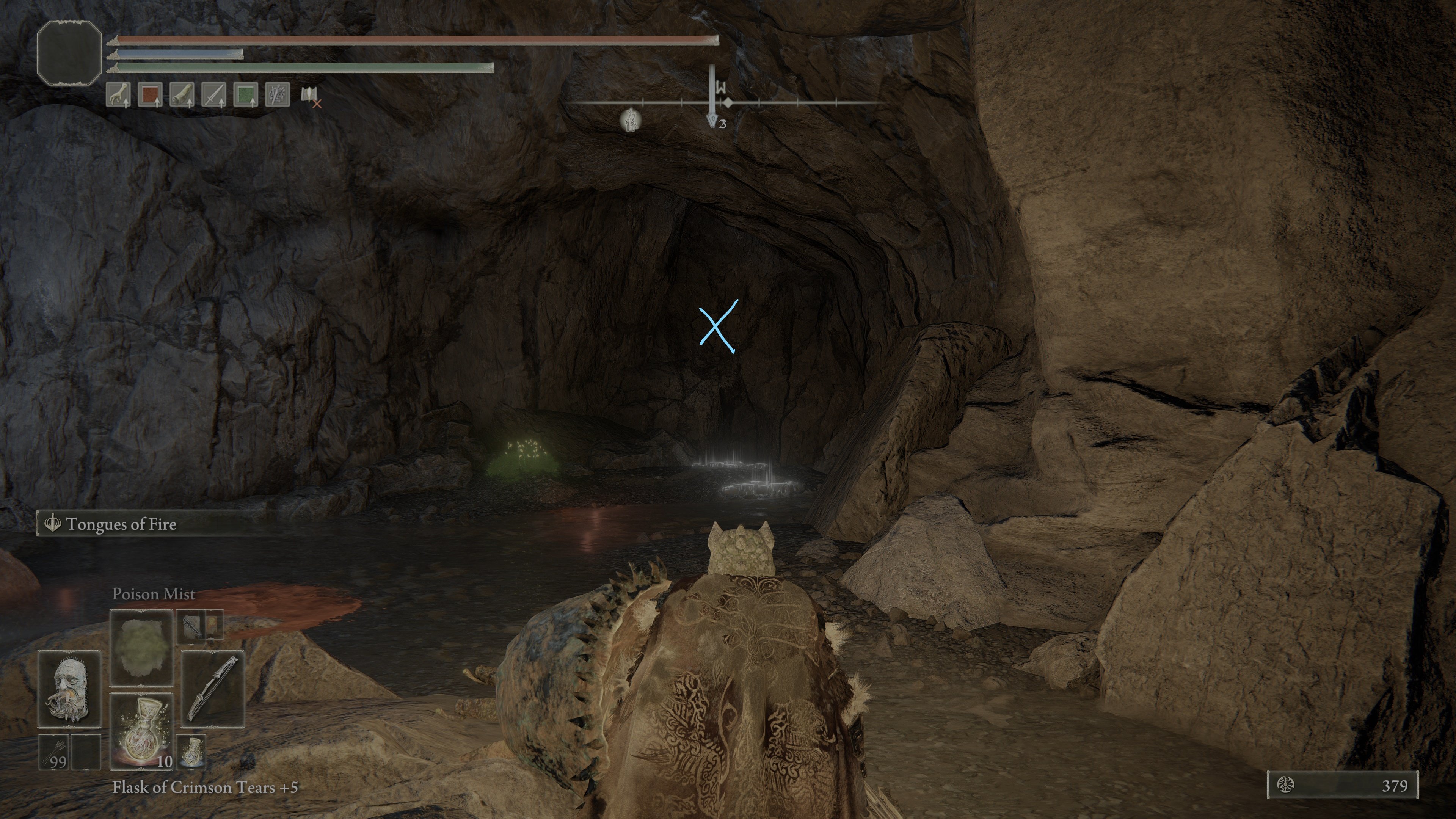 Jump down this waterfall, then pick up two Golden Rune (5). To your left is an illusory wall with four skeletons and four chests behind it. 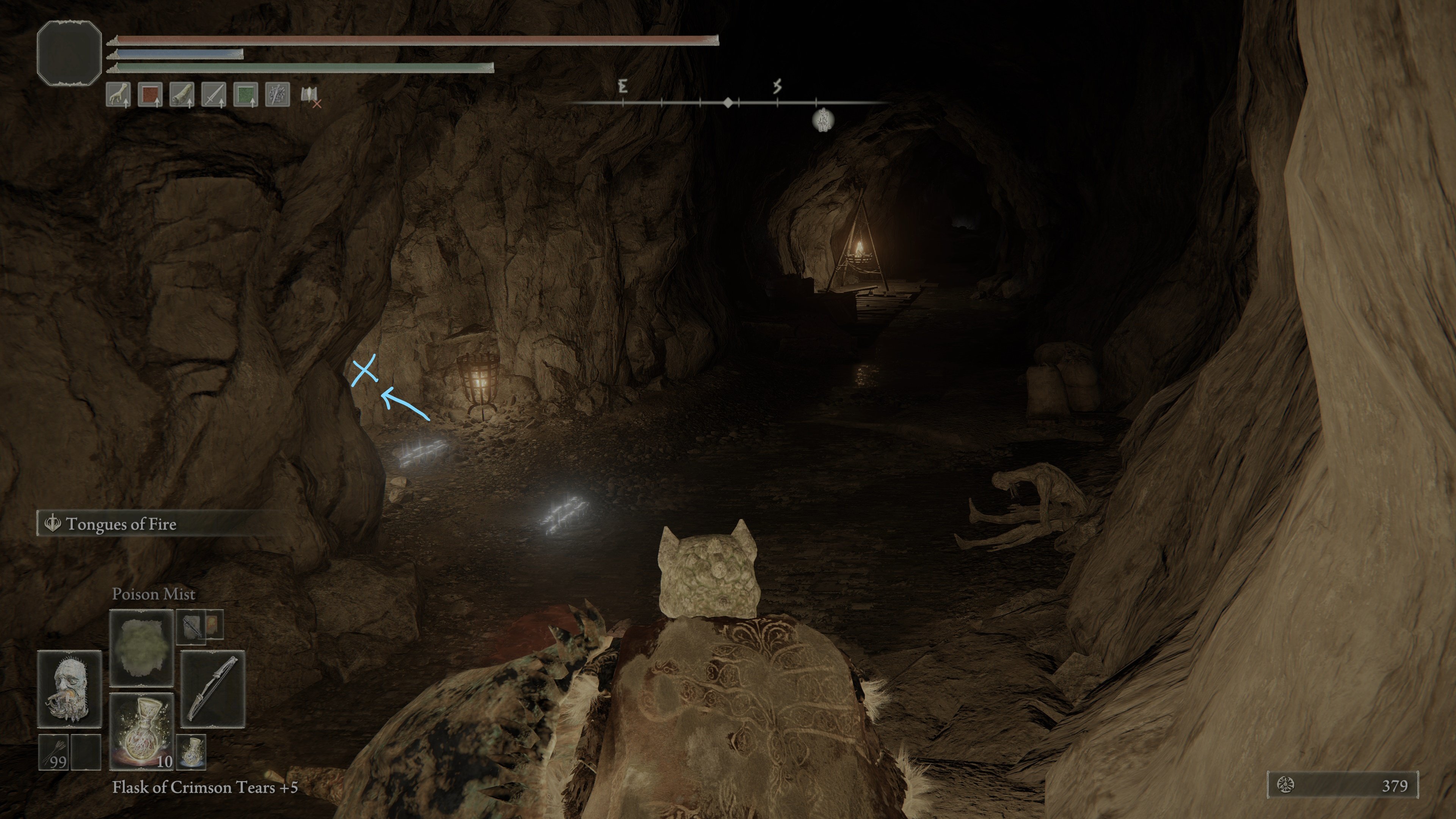 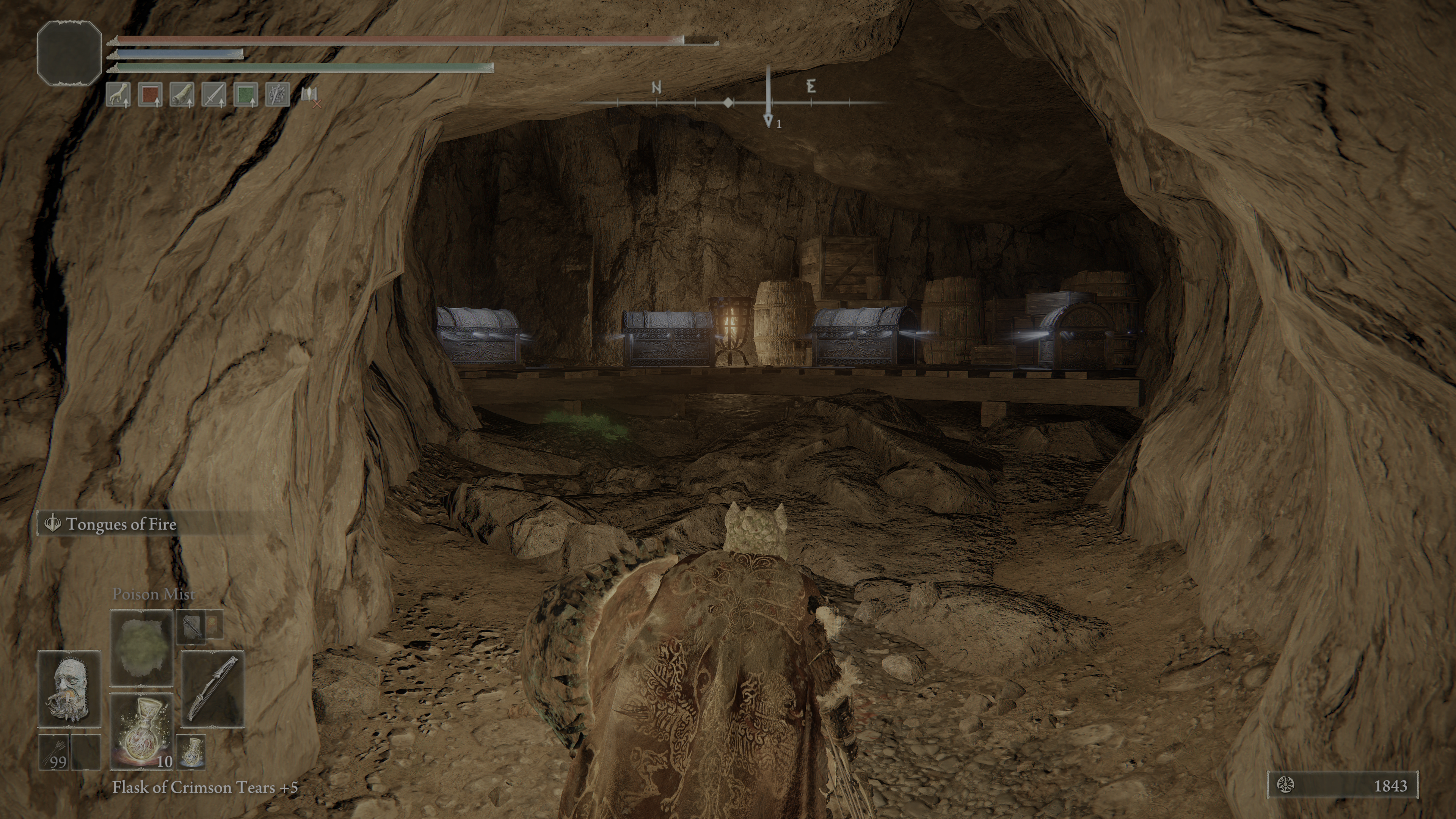 You can get Silver-pickled Fowl Foot x5, Black Hood, Candletree Wooden Shield, and a Nascent Butterfly.

Four skeletons await you in the next room, among which is one with a large axe and more health. Another one faces a wall which is illusory, hiding a chest containing a Stonesword Key. 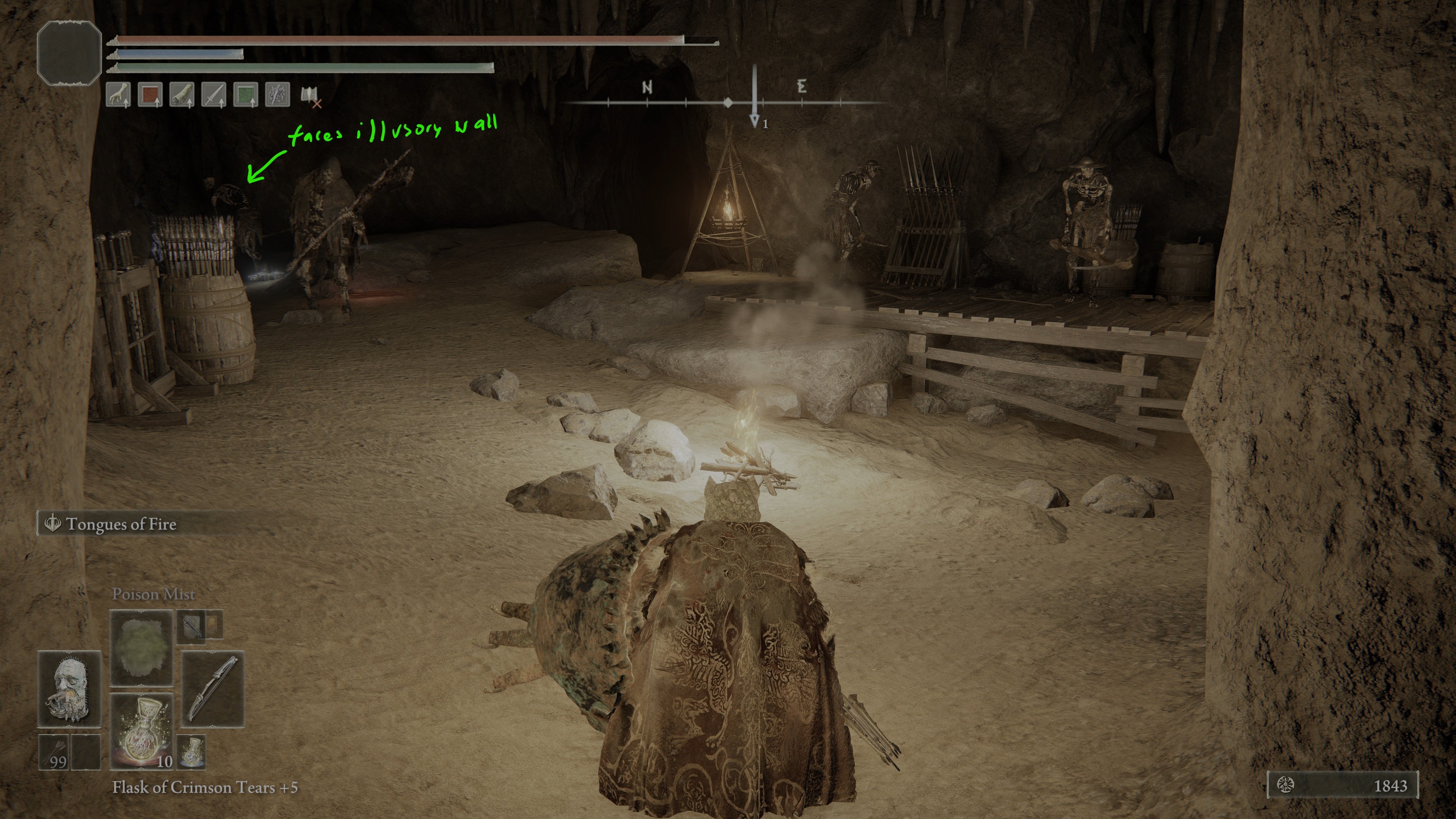 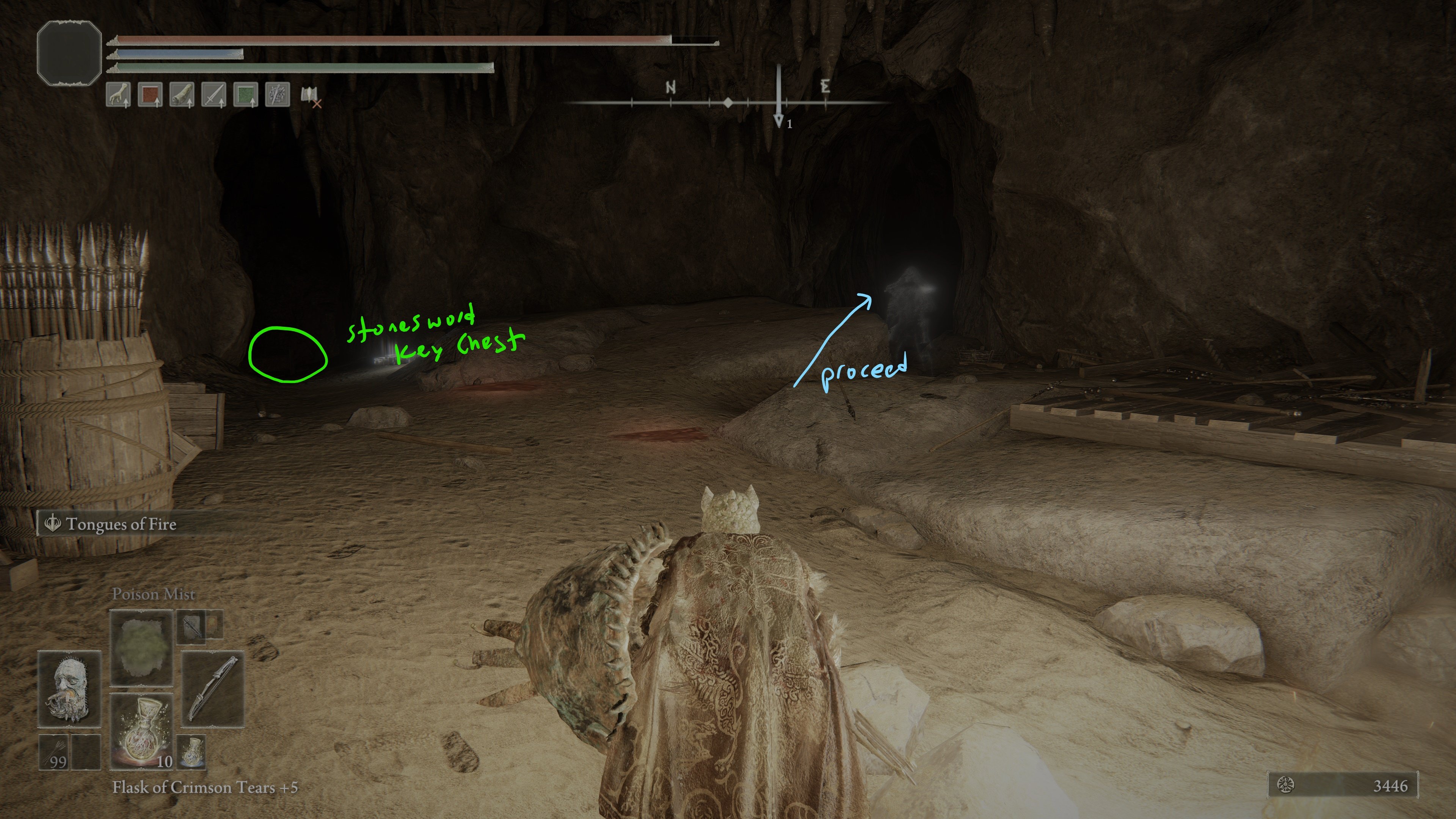 The next room holds three more chests with Golden Greatarrow x10, Raptor Talons, and Dragonwound Grease x4. Proceed until you are in an open cave with a waterfall, jump to the left, then hug the left wall and roll into the apparent dead end to uncover two more chests with Raptor's Black Feathers and Skeletal Mask. 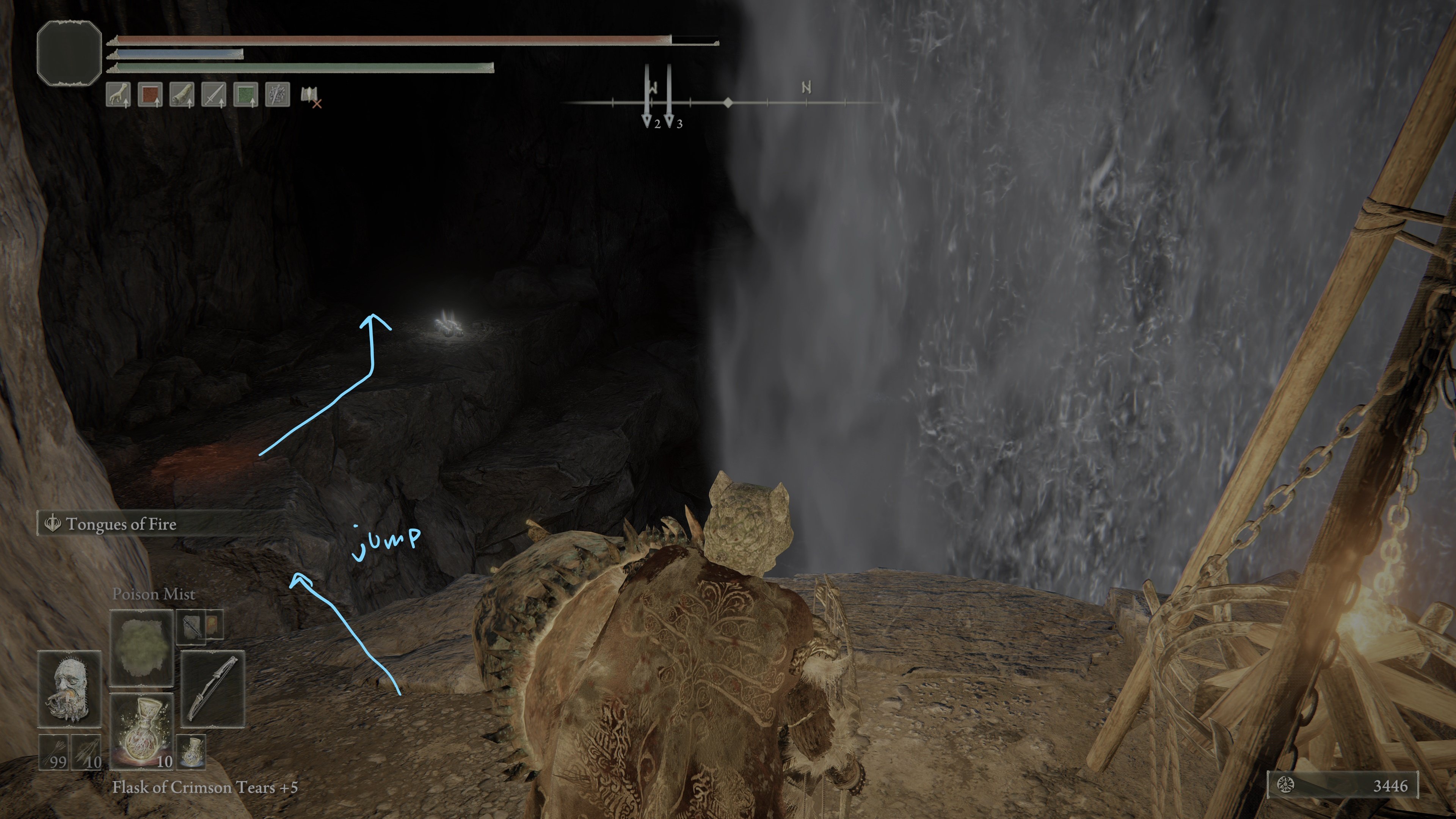 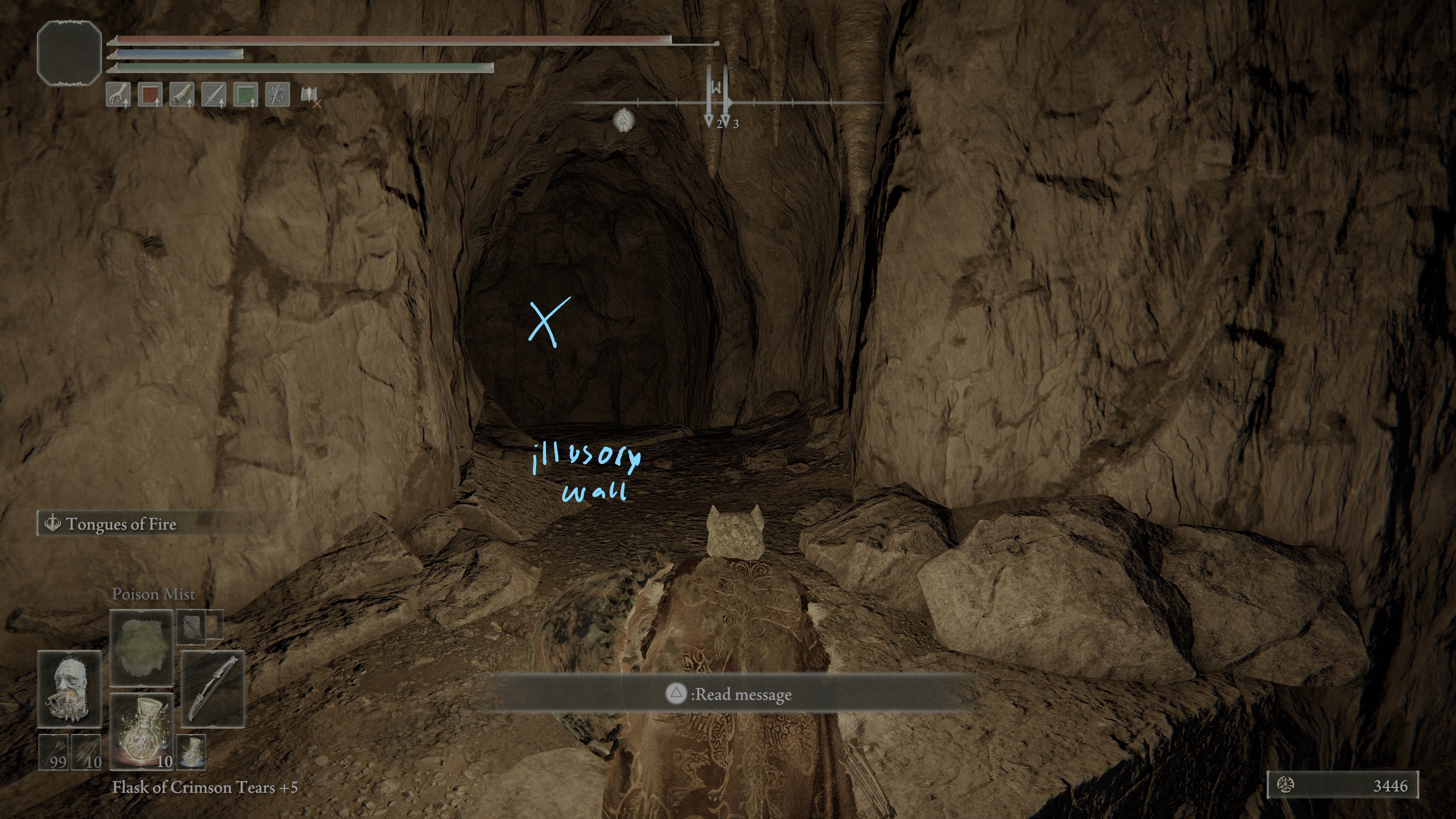 Roll through the illusory wall on the opposite side of the room and get ready to fight Necromancer Garris who drops Family Heads. 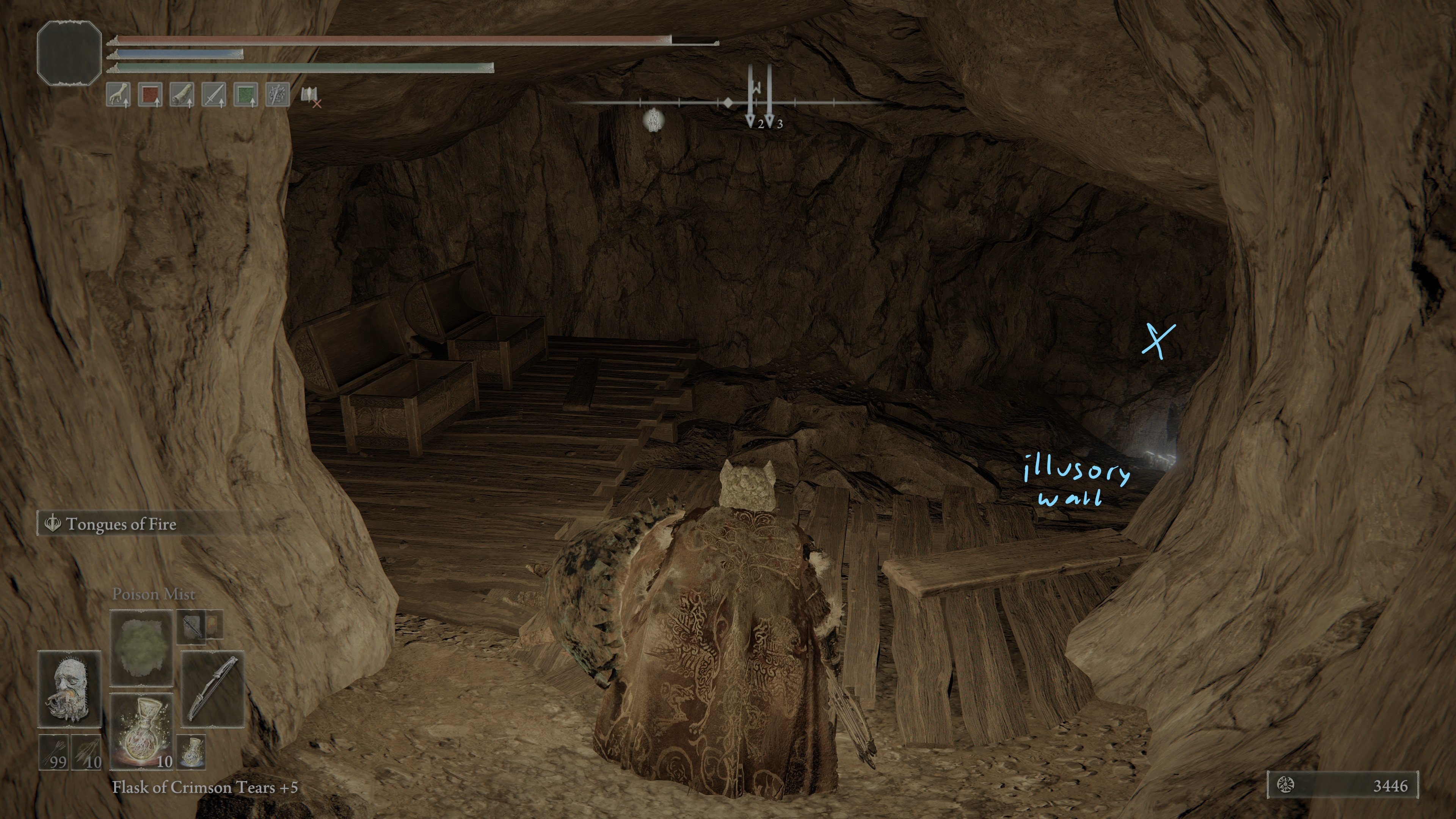 Make your way back to the waterfall and stay left to face the other boss, the invisible Black Knife Assassin. 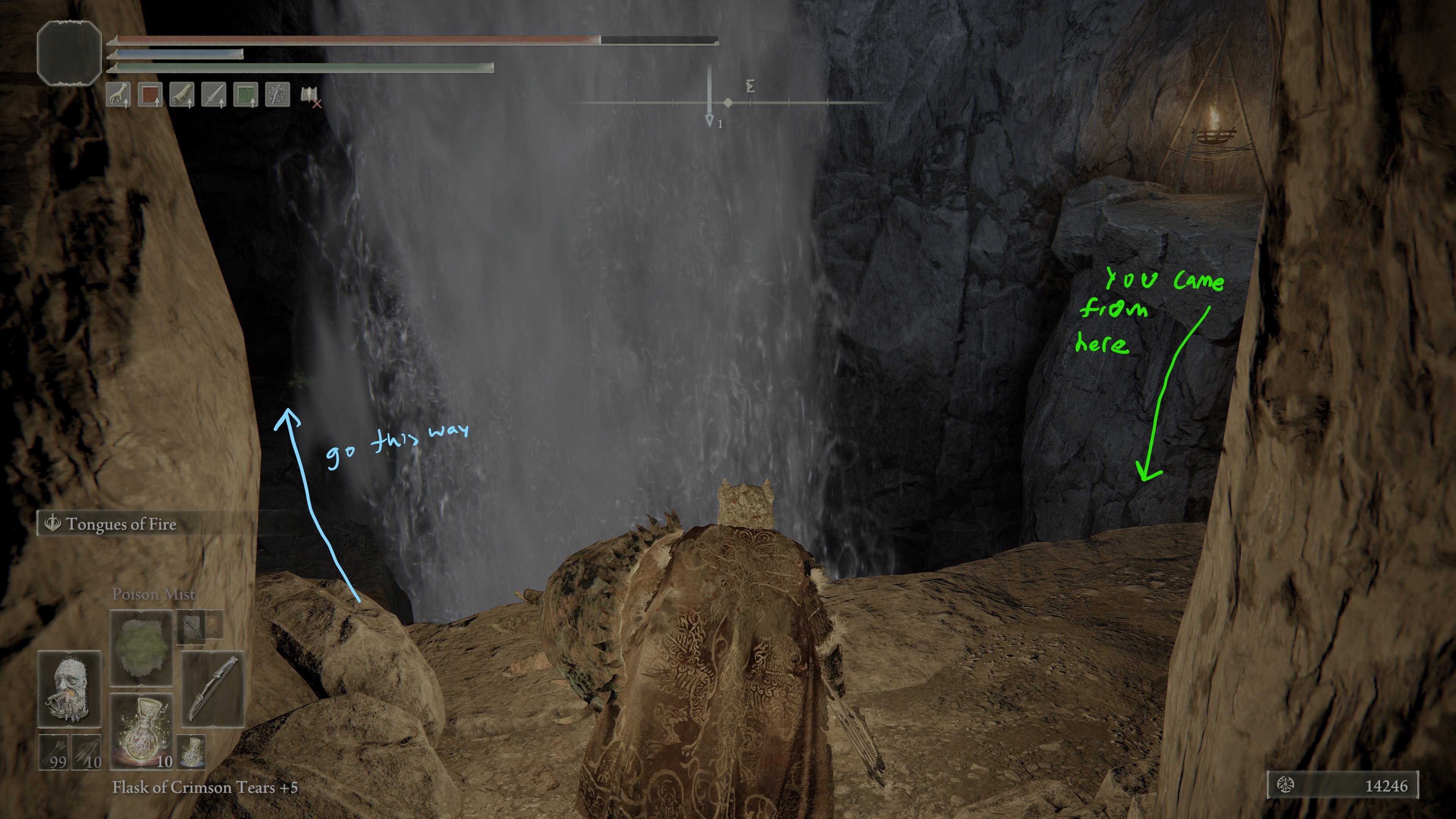 If you buy Sentry's Torch from the Hermit Merchant for 7000 Runes, you can put it in your off-hand to make her visible (even if you two-hand your main-hand weapon). One strategy is to fight her (without buying the item) is to simply stand on the patch of dirt, and watch for her footsteps in the water. You'll have to time your swing to hit her -- a weapon with a horizontal attack spread makes this easier.

After defeat, she drops the Concealing Veil.