The player originally comes across Gideon Ofnir as an NPC. As a boss, Sir Gideon Ofnir is the Tarnished leader of the Roundtable that uses advanced Sorceries as well as Incantations, some of which he teaches you in exchange for information. He can be found in Leyndell, Ashen Capital, an instance of the Royal Capital which is accessible only after making significant progress in the story.

This is not an optional boss, players must defeat him to advance in Elden Ring. Gideon is a spellcaster and some of the spells he has access to depends on which shardbearers you have defeated or places you've visited and reported to him, or questlines you have completed/not completed before reaching the boss fight. For instance, failing to find and interact with Azur for Sellen's quest gives him access to Comet Azur. Before the fight starts, Gideon makes a rather lengthy speech during which you are free to attack him. He drops the All-Knowing Set and Scepter of the All-Knowing when defeated.

Queen Marika has high hopes for us.

That we continue to struggle, unto eternity.

Sir Gideon Ofnir, The All-Knowing is found in Leyndell, Ashen Capital. This location is available is after completing Crumbling Farum Azula. He is found in the Erdtree Sanctuary building.

The Best Tips for Sir Gideon Ofnir, The All-Knowing:

Gideon has access to both Sorceries and Incantations and he can deal a huge amount of damage in a very short time. However, as a magic-focused boss, he is also easily interrupted. His more advanced spells such as Rykard's Rancor and Comet Azur require some channeling and a well-timed heavy jump attack will cause him to plop facedown on the ground, interrupting his cast.

Another weakness of Gideon is that nearly all of his attacks are projectiles that can be blocked by terrain and it just so happens there are several pillars conveniently placed on either side of his chamber. Make good use of these pillars, particularly for the same two spells noted above and you should be able to own this fight.

One attack of note for melee players to watch out for is his Black Flame Ritual which comes out really quickly and can shred HP in mere seconds. Make sure you are dodging out of range of this as soon as you see the black flames.

Magic users who are specc'd for the Eternal Darkness spell can near-trivialize this fight. Eternal Darkness creates a void orb that sucks in all projectile-based enemy spells, effectively rendering them useless. This includes his all-powerful Comet Azur beam. Do note that the projectiles can still hit you if you are in their path as they travel towards the void so make sure you are casting Eternal Darkness on one side and moving a few steps away to the side as you pummel Gideon with your own spells.

Eternal Darkness is not a fool-proof plan, however. It has a short duration and you should still be aware of Gideon's most dangerous attacks and use the pillars to your advantage.

Tiche and you combined can stunlock him without bothering with Eternal Darkness. Adula's Moonblade can be effective, or use fast spells to compensate for his tendency to dodge.

To stand before the Elden Ring. To become Elden Lord.

What a sad state of affairs.

I commend your spirit, but alas, none shall take the throne.

Queen Marika has high hopes for us.

That we continue to struggle. Unto eternity.

A Tarnished cannot become a Lord. Not even you. 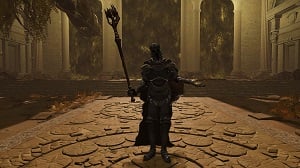