Smithing Master Hewg is an NPC in Elden Ring.
Hewg is an imprisoned Misbegotten blacksmith that can be found at the Roundtable Hold. He will upgrade your Weapons beyond the +3 level, as well as duplicating Ashes of War for a fee, provided you have the proper Materials.

You're a new face. No matter, it's all the same.

Lay out your arms. Let's get smithing.

Smithing Master Hewg can be found at the Roundtable Hold.

When speaking with Smithing Master Hewg, you are presented with the following options:

After speaking to Roderika again

About Roderika (after her dialogue about becoming a certified spirit tuner)

After refusing Melina's request at the Forge of the Giants

After the cutscene at the Forge of the Giants

After speaking to Roderika again

About the god-slaying weapon 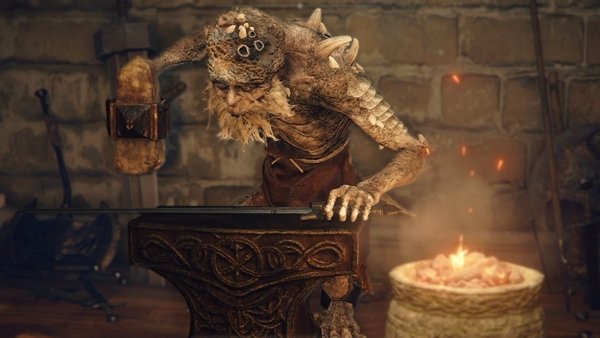