Sorcerer Rogier is an NPC in Elden Ring. Rogier uses a hat that covers his face and talks in a very polite way. He acts a merchant, selling Ashes of War relating to the Magic Affinity, as well as being a Quest NPC himself. Interacting with him may also make him available as an NPC Summon.

The pleasure's mine. Rogier's the name. A sorcerer, as you might have guessed.

Rogier can initially be found in Stormveil Castle by the altar of the Chapel in the northwest section. [Map Link]

Rogier presents himself and seems pretty friendly. He tells you that he is a Sorcerer and he is looking for something in the castle. He's also available as a NPC cooperator against Margit, the Fell Omen without needing to meet him first.

Rogier also acts as a Merchant, selling Ashes of War.

About the corpse under Stormveil

Giving him the Black Knifeprint

Why do you want a cursemark?

Ranni cast off her cursemark 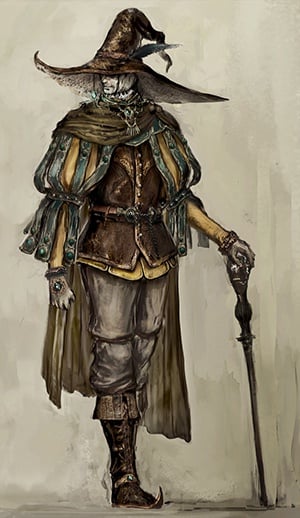