Spiritcaller Cave is a Location in Elden Ring. The Spiritcaller Cave is found in the Mountaintops of the Giants in the east, along the western bank of the Freezing Lake. Players can reach this location by traversing the edges of the lake. The cave's entrance is sealed by an Imp Statue, requiring 2 Stonesword Keys to unlock.

See the Spiritcaller Cave's location on our Interactive Map by clicking on [Elden Ring Map here]. 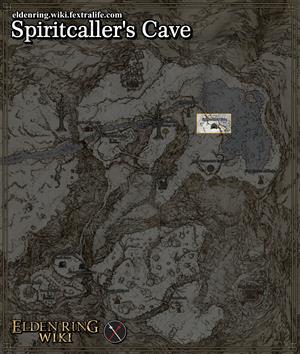 All NPCs and Merchants in Spiritcaller Cave

This dungeon is almost completely dark in most places. It is highly recommended you equip a Torch or Lantern while traversing the cave. The cave is filled with Lesser Spirit-Caller Snails. Similar to the boss found at Road's End Catacombs, these spectral snails summon Spirit Ashes to attack their opponents. These particular snails typically summon Direwolves to defend themselves. Defeating the snails will kill their summons as well. If you hold up the Beast-Repellent Torch, the wolves will not attack you unless you attack them first, making it easy to take out the snails. Watch out for the remaining summoned enemies.

From the Site of Grace, follow the narrow tunnel to the next area and go through the tunnel in the north. Avoid the center of the room as stepping on it will form a sinkhole sending you to the level below. The next room has a tree trunk that you can use to descend. There is a snail hiding in the bushes in the southeast. Take it out and check the corpse nearby for 5x Arteria Leaf. Continue along to the west and in the next cavern, check for a small opening in the south where three corpses can be found. You can loot a Hero's Rune (1), Golden Rune (10) and a Rune Arc from them. Head back out and continue along west.

After the narrow tunnel, you arrive in another mid-sized cavern. Three different snails will summon one "Inaba, Disciple of Okina" each. The Inabas are strong enough that you should kill the snails immediately so you don't have to deal with them. Check the two corpses for a Golden Rune (12) and 2x Freezing Grease. Head south from here and kill or sneak past the wolves using the bushes. You can find their snail in the bushes further south. Check the corpse by the tree next to the snail for the White Reed Armor, White Reed Gauntlets and White Reed Greaves. There should still be several wolves in the cavern which means there is another snail. You can find it in the southeast of the caverns. Sneak up to the snail and kill it to destroy all the wolves. Now you can backtrack through the caverns to collect a Golden Rune (6) and an Invigorating White Cured Meat. When ready, proceed south through a narrow tunnel to the dungeon's boss arena.

Godskin Apostle and Godskin Noble are found in spirit form here and you must defeat each one-at-a-time.

Godskin Apostle appears first. The Godskin Apostle is not as aggressive as the Godskin Noble, but will still follow you around the arena. Staggering him gives you plenty of chances to perform comfortable melee attacks without worrying about his AoE spells. As he reaches lower health, he starts casting lots of area spells, and it's convenient to have a good spirit ash ally tanking him out so you can keep your distance.

Godskin Noble appears after defeating the Apostle, and also appears in spirit form. During its first stage, The Noble is not very good at ranged attacks, but it can be very awkward to fight him at melee distance. He will constantly walk towards you very aggressively. You can use the trees around the arena to pivot and create distance between you and him. Like the Apostle, the Noble can be staggered, which again gives you a safe chance to perform a critical attack on him. When low enough health, he will start rolling around (before which he will pump his chest and jump into the air), which can be very difficult to avoid. You are recommended to utilize the trees to out-maneuver him during his rolls. The trees will not stop him or get him caught, but each one he rolls over must break, and this gives you a small amount of additional time to maneuver away. He will also use Black Flame magic attacks, but they are very predictable and can be easily avoided by staying on the move and dodging.

After defeating both, the Spirit-Caller Snail (which summoned both of the Godskins) will appear. Once the snail makes itself visible, you can quickly eliminate it due to its low health.