Stealth is a Combat mechanic of Elden Ring (ER). Elden Ring's Stealth was first revealed via leaks and rumors, and later confirmed by the official Elden Ring website.

Create your character in FromSoftware’s refined action-RPG and define your playstyle by experimenting with a wide variety of weapons, magical abilities, and skills found throughout the world. Charge into battle, pick off enemies one-by-one using stealth, or even call upon allies for aid. Many options are at your disposal as you decide how to approach exploration and combat.

In-game, there is a crouch mechanic that allows you to move unnoticed. To be precise, an enemy's detection range is reduced if you are crouching while approaching them. If you approach them from the front they will still notice you, but approach them from behind while crouching and it's likely they won't notice you at all. You are able to use the environment for assistance, such as disguising oneself in tall grass, or create distractions through the noise created by shooting an arrow at a nearby wall. Other opportunities could come from special Skills and by having special movesets or iframes usable by those with high stealth.

Stealth elements usually allow players to perform powerful moves and inflict critical damage on enemies. In Elden Ring, successfully attacking an enemy from behind when they are unaware of your presence allows you to perform a Critical Attack through a backstab. There are Talismans in the game that boost the damage of these Critical Attacks, or add extra effects when performing one.

Sneak and stealth mechanics can be improved via special Magic Equipment and spells. While none make the player completely undetectable, some make the player semi-invisible, some conceal the sound made by the player, and some improve stealth while crouched.

This is a list of Equipment and Magic that help boost player stealth:

Players are able to stealth during co-operative play and during invasions, but shouldn't expect it to work the same way on host players while invading as it does on NPC enemies. No equipment or spell allows the player character to go completely invisible, so even though they've stacked on stealth items, other players will still be able to see them. 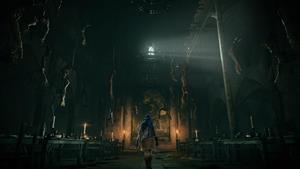