Thops is an NPC in Elden Ring. Thops is a student at the Academy of Raya Lucaria. He can teach some rudimentary sorceries, provided you can spare a small donation of Runes first.

For a small donation, I'd be happy to share my knowledge.

Thops can be found at Church of Irith. [Map Link]

You can later find him dead, sitting at a desk just outside the room containing the Schoolhouse Classroom Site of Grace within Raya Lucaria Academy. On his body is the sorcery Thops's Barrier, an Academy Glintstone Staff, and Thops's Bell Bearing. You can bring the Bell Bearing to the Twin Maiden Husks at the Roundtable Hold to unlock his inventory for purchase there. 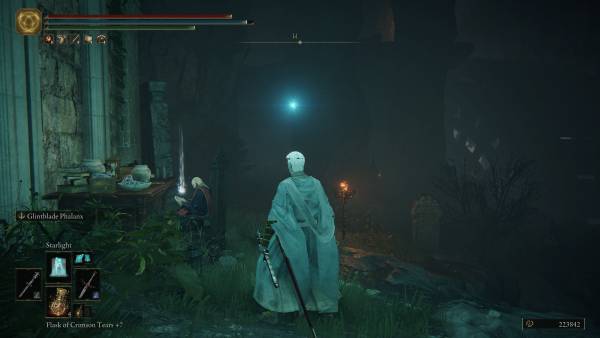 Attempting to give a scroll