Ulcerated Tree Spirit is a Field Boss found in Mt. Gelmir, in the Giant's Mountaintop Catacombs, and in the Fringefolk Hero's Grave.

"Don't Panic" is the motto of the Ulcerated Tree Spirit fight. Most of the times when it's flopping around it won't damage you, so learning when the few times that touching it hurts is the key to this fight.

The most important thing to watch out for is the roar before the bite attack. Immediately after the roar, it will crawl up on the wall and charging at you with mouth wide open! Shift left when you see it and you should avoid it. Be ready to roll if it is too close.

Phase 1: Keep pushing towards his left side with your shield up until you are in range. If your Guard Boost is too low, it will stagger you, but its melee attacks are slow enough that you can recover before the next one starts. If it starts a breath attack, get in close if you are near enough, and run to the side if you are not. You can get some solid swings in while it is breathing everywhere else.

Learn the one crawling animation that does damage you from touching its entire body and avoid t.

Watch out for the start of Phase 2, since it does a large AOE with lightning strikes when it first transitions. It can do this AOE later in the fight as well, so continue to watch for the windup. If you are already far, run away. If you are close, move away with your shield up and just eat the damage.

Phase 2: The Tree Spirit starts doing holy damage with its attacks, so blocking with your shield will do chip damage to you. Don't Panic. The strategy is the same as phase 1, but hopefully you've got some timings down and can roll through a few of his melee attacks. Don't be afraid to take the chip damage on your shield instead of a full strength attack.

Repeat enough times to learn the windups and you'll be able to pick out the ones where there's enough time for a charged attack or multiple attacks. Eventually, you'll put this tree back in the ground.


Starting off the fight, it will either lumber toward you and prepare for melee combat, or it will charge at you for its three-hit, double-charge combo. For the Double charge, dodge LEFT then LEFT again, then wait until you see it climb the wall and wind up, then dodge LEFT one more time to avoid the grab.  Now, once you are in the fight, it is recommended to stay close to the boss's left arm (right side looking at the beast) where it meets the ground. You can punish almost every melee move with multiple light attacks and this strategy mostly keeps it from using the dangerous yellow breath attacks.

So if it claw swipes, dodge RIGHT, read for another move, then get in a light attack and repeat. If it raises its claw to stomp, then roll RIGHT, count two stomps with the claw you just avoided, then jump attack and reset. If it flops its neck down, roll RIGHT, turn to your left and get a couple of light attacks, then read its next move and reset. If it starts winding up its tail, back away from it then Dodge Roll right, then punish with a jump attack. Finally, if it hunkers down and cranes his neck up and begins to glow, SPRINT AWAY quickly. This is the beginning of phase two and the explosion will kill you or lower your health to where you can be killed easily. It is a grind in the early game because of the beast's high HP, but you can do it! Study the moves and develop a reaction to each one.

One weakness of the Tree Spirit is that its claw and mouth attacks can often overshoot the player.  Staying as close as possible allows for easy damage, only being threatened by the tail whip attack. The whip can be blocked with a decent amount of stamina, since there's enough time after the block to recover from a stagger.

You should bully him like a melee build. It is so large that you can't really make a gap that it won't immediately close, and it will also go for a bite attack if you get too far out. Don't start any attacks straight in front of it unless you're sure it's not about to go for a breath attack, and try to shoot for its side after it flops past you.

If you stagger the Ulcerated Tree Spirit during its phase-change animation (the move where it explodes with golden light), the AI of the boss will stop acting in any way. This will allow you to damage the boss however you see fit from safety. Be warned however that after about 8 seconds after the AI stops functioning, the boss will resume moving. So it is in your best interest to continue staggering and Critical Hitting the boss so that it remains immobile while you work towards defeating it. 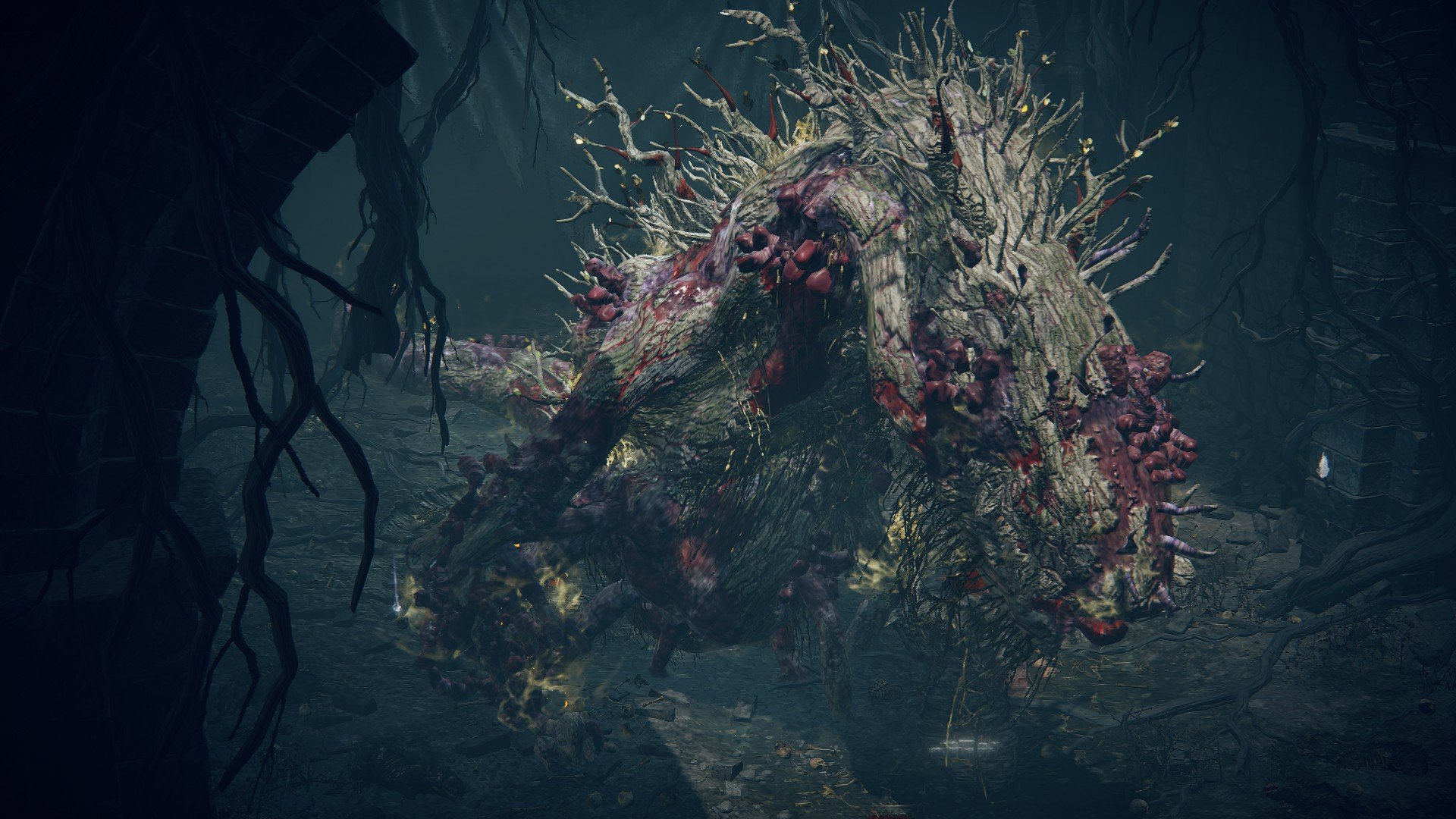