It is a large animated stone gargoyle that can switch between a sword and halberd, and is found at the bottom of the Siofra Aqueduct in Nokron, Eternal City. A non-boss variant can be found at Leyndell, Royal Capital. Cracks and blemishes in the Valiant Gargoyle's bodies have been patched up with the corpse wax of those they've fought and won against.

This is an optional boss, as players don't need to defeat it in order to advance in Elden Ring. However, doing so yields useful Items and Runes. At the Siofra Aqueduct, he fights alongside Valiant Gargoyle (Twinblade) making it a Duo-Boss. Each gargoyle has 5,600 HP. This greatsword variant will appear first, and the twinblade variant will join the battle when the first gargoyle reaches ~50% health. Having Spells or Consumables that alleviate Poison build-up can be beneficial for this fight. In addition, D's Twin Brother can be summoned to make fighting two bosses at the same time more manageable. The Valiant Gargoyle drops the Gargoyle's Greatsword and Gargoyle's Twinblade, and the non-boss variant drops the Gargoyle's Halberd when defeated.

An imposing stone statue, usually found guarding certain areas. It wields a massive greatsword to fire off a devastating wave of energy, and it can switch to its halberd to whip up a whirlwind.

Valiant Gargoyle is a Great Enemy Boss found in Siofra Aqueduct. After defeating it, the Great Waterfall Basin Site of Grace is accessible. Map Link

Valiant Gargoyle can be found by descending down to the lowest level of the Siofra Aqueduct in Nokron, Eternal City. When you approach the great waterfall, it jumps down from the ceiling to attack you.

The Best Tips for Valiant Gargoyle:

We can look at the encounter as having 3 phases: Phase 1 being a 1v1 fight against the first Gargoyle only, Phase 2 being a 1v2 against both Gargoyles, and Phase 3 being a 1v1 against the remaining Gargoyle. The goal in this encounter should be to take as little damage as possible in Phase 1, quickly burn down the low health Gargoyle in Phase 2, and then have enough Flask charges to get through Phase 3.

Prior to fighting this boss, the player may want to consider having a decently upgraded Flask, a way to cure Poison and decent damage output. If you attempt this fight with low damage, you may have problems with Phase 2, when both Gargoyles are ganging up on you. Also consider having a weapon with high range in order to hit the Gargoyles properly, this can be especially effective combined with playing with the camera unlocked. You may find that ranged summons such as the Spirit Jellyfish Ashes are good for this fight, as the Gargoyles tend to move around quite a bit and their attacks have large AoEs, making melee summons ineffective (needs more testing).

In this phase, the goal is to simply take as little damage as possible. There is no timer, as the Twinblade Gargoyle comes into the fight when the Sword Gargoyle is around half health. Take your time to learn its attacks, most of them are relatively easy to dodge on reaction. You can be relatively aggressive in this phase if you learn the patterns, letting you get a potential stagger and consequently a critical hit coming into Phase 2. The Gargoyle will swap between its sword and halberd periodically, both of them have relatively easy to read attacks, but if you find that one of the forms is harder for you, you can always simply wait it out by dodging backwards and running away from the Gargoyle to wait for the easier phase.

It is possible to stay quite close to the Gargoyle most of the time, just watch out for the Poison Mist attack it will use at close range. If you see it coming out, you have plenty of time to simply sprint away from the Gargoyle, and you will not take any damage. You can try to get free hits on the Gargoyle while it is spawning the mist, but be careful that you do not get poisoned. The safe bet is to simply run away and wait for a different opening.

Depending on your weapon and level of aggression, it is possible to get a stagger on the Sword Gargoyle right as Phase 2 is coming up. This is optimal, since it will give you a large burst of damage on the Sword Gargoyle. If your weapon has a good weapon art (such as The Queen's Black Flame), you may even want to use the weapon art instead of taking the critical hit.

Regardless of whether or not you get a stagger, make sure you use your highest damage output right after the Twinblade Gargoyle spawns. The optimal scenario is to fully kill the Sword Gargoyle before the Twinblade Gargoyle makes it to your position. Do not be afraid to trade hits with the Sword Gargoyle to make this happen, just watch out to not get flanked by the Twinblade Gargoyle. This is the hardest part of the fight, so doing everything in your power to end it quickly will greatly reduce the difficulty of this encounter. Consider using any player or weapon buffs right before Phase 2 begins, simply to get the largest burst of damage (one such buff can be the damage-increasing Crystal Tears for the Flask of Wondrous Physick).

If you don't manage to kill off the Sword Gargoyle before the Twinblade Gargoyle gets to you, don't worry, you will simply have to play a bit differently from now on. If the Sword Gargoyle is not dead, it should at least be low on health. At this point, simply kite both of them and wait for openings to get hits in on the Sword Gargoyle. Try to keep both of them on your screen, and don't be afraid to take your time. It's worth noting that only one gargoyle usually attacks at a time, and it is usually the one closest to you. Run around and try to keep the Sword Gargoyle in front of you so that it will attack and you will be able to finish it off. You only need a few more hits to take down the Sword Gargoyle, so wait for your safe openings. It is highly advisable that you play with the camera unlocked in Phase 2, if you weren't already.

In the last part of this fight, you will only face the Twinblade Gargoyle, who will periodically swap between a Twinblade and a Greataxe. Its Twinblade moveset can be rather hard to read, so don't be afraid to simply wait it out until it swaps to the Greataxe. You can survive the Twinblade phase just by rolling away from it during most of its attacks. Most of the Greataxe moveset is much easier to read, and is more similar to the Sword Gargoyle's Halberd moveset. The Twinblade Gargoyle still has some very nasty attacks that can even kill you from full health if you time your rolls incorrectly. However, the fight is no longer a race against time in this phase, so take all the time you need to safely get damage on the Twinblade Gargoyle. You can slowly take it down, using flasks that you hopefully have left from the first two phases to sustain you.

Ranged attacks are especially beneficial when both gargoyles are present to try to handle them both from a distance and avoid receiving damage. Try to keep them both in view to avoid any unexpected attacks from one or the other. You don't want to be unaware while a gargoyle is spewing extra poison into the arena or be unprepared for when they perform a lunge and close the distance very quickly. Focus ono clearing the first gargoyle so you can use phase 3 to focus on the twinblade gargoyle.

The cliff on the right side of the arena can be utilized to kill the first Gargoyle.

Line up the Gargoyle between you and the cliff, then simply wait for the attack where he jumps back. The Gargoyle will fall of the cliff, killing him instantly. This leaves just the second one for an (relatively) easy 1v1.

This is very inconsistent though, needing some good luck to get the Gargoyle lined up and have it do the correct attack.

In coop mode, the first gargoyle can get stuck on the cliff it descends from. It can be damaged with ranged weapons, but the Twinblade gargoyle won't show up. The best solution is to reset the arena. But there is chance that it will eventually jump off the cliff somewhere on the right side. At marked location. 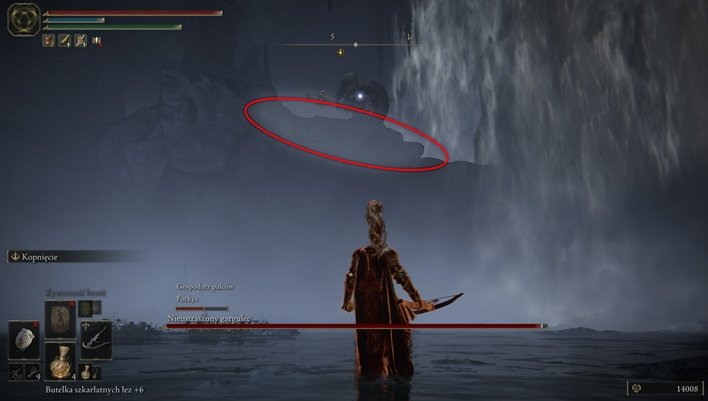 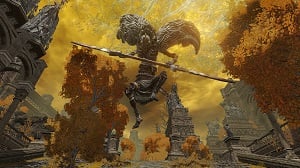 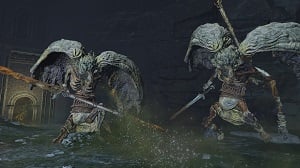