Volcano Cave is a Location in Elden Ring. The Volcano Cave is found in Mt. Gelmir, in the north. Players can reach this location by travelling to the Ninth Mt. Gelmir Campsite Site of Grace and climbing the adjacent ladder, then hugging the cliff as you travel along the pass north, passing some soldiers and some demi-humans. The cave will be in the cliff on your left.

Volcano Cave is nestled high atop the mountains and to the very north. [Elden Ring Map Link] 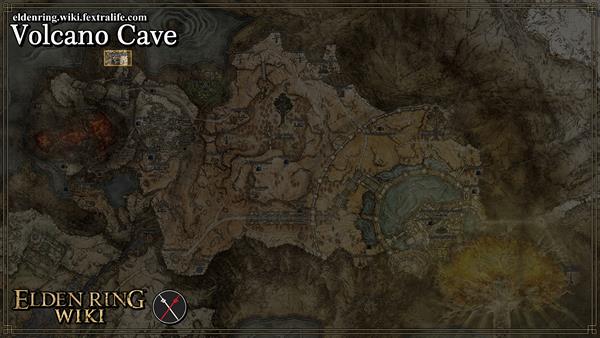 All NPCs and Merchants in Volcano Cave

There are no Upgrade Materials here

There are no uniques, ashes or keys here.

Just past the Site of Grace, you will find a group of Demi-Humans. Defeat them and then head west to find a Golden Rune (6) on a corpse at the edge of the path. Drop down onto the ledge below to another group of Demi-Humans but don't drop into the pit with the Demi-Human Chieftain just yet. Instead, follow the path in the north into a larger cavern, encountering more Demi-Humans along the way. Inside the cavern, you can find Arteria Leaf x3, Sliver of Meat x6 and a Coil Shield among the bodies.

Backtrack to where you saw the Demi-Human Chieftain, drop down and defeat it. You can find Lump of Flesh x5 on a corpse in the corner. The mist gate towards the boss' chamber can be found in the east from here.

Margot is a very straight forward fight. Unlike other Demi-Human Queens, she will not be using any magic attacks as she is gripped by a bestial madness. Instead, she will use her staff to smack you and slam the ground. All her staff attacks are highly telegraphed and are easily dodged. You can also maintain your distance as the cavern is large enough. After a certain point, Margot will toss her staff at you and resort to using her limbs to perform swiping and slamming attacks. She will also perform a leap and attempt to bite her target but overall, her speed remains the same and she has lots of openings in between her slow attacks.

Defeating Margot will award the Jar Cannon as well as 8,250