Lake of Rot is a Location in Elden Ring. The Lake of Rot region features treacherous red waters that inflict scarlet rot on players that stay in it too long. You can reach it from Ainsel River Main, by heading south-west from the Nokstella Waterfall Basin Site of Grace (find it on the Interactive Map here).

A great lake of standing water downstream of the Ainsel River. It is said that the divine essence of an outer god is sealed away in this land. 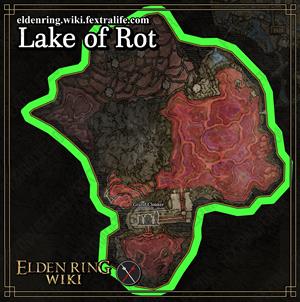 All NPCs and Merchants in Lake of Rot

All Items in Elden Ring's Lake of Rot

Walkthrough for Lake of Rot in Elden Ring

You can get to Lake of Rot by heading southwest from the Nokstella Waterfall Basin Site of Grace in Ainsel River Main. There's a lift in the area that takes you down to the northern part of the lake -- the lift is in a building past where the Baleful Shadow spawned. Right as you emerge, you'll find the Lake of Rot Shoreside Site of Grace. At the water's edge, just slightly past the Site of Grace, you can loot a corpse that holds the Map (Lake of Rot), making navigation easier. 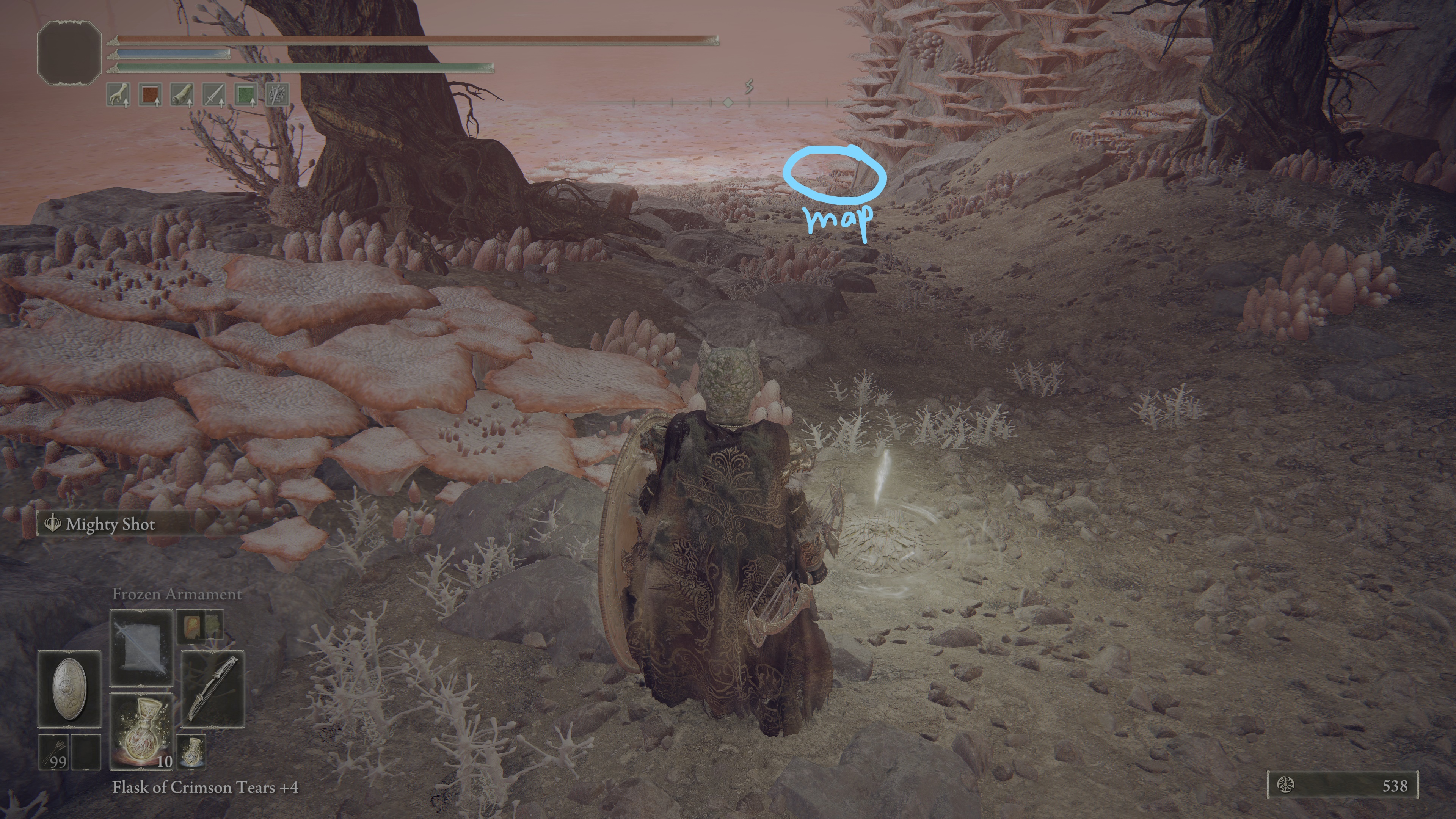 The waters here are treacherous, quickly applying the Scarlet Rot Status Effect each second you stand in the water. It is recommended to have many Preserving Boluses on hand to remove the status effect immediately and even equip Talismans, Armor, and Incantations (Flame, Cleanse Me) that can help alleviate its build-up. Also, be aware that Basilisks may come out of the waters to ambush you. The Beast-Repellent Torch will pacify all Basilisks in the area, making it much easier to traverse the lake. The Mushroom Set can make traversing this area a lot easier due to its massive innate Immunity. Its poor defense stats are irrelevant against the Basilisks, which don't inflict any direct damage.

First, from the shoreline, look southeast and you may be able to spot a lone Ancestral Follower wading in the rot in the distance. Sprint to it and kill it, and you'll acquire the Immunizing Horn Charm +1 which greatly raises your Immunity. Immunity raises your resistance to scarlet rot, which will make traversing the place a bit easier. 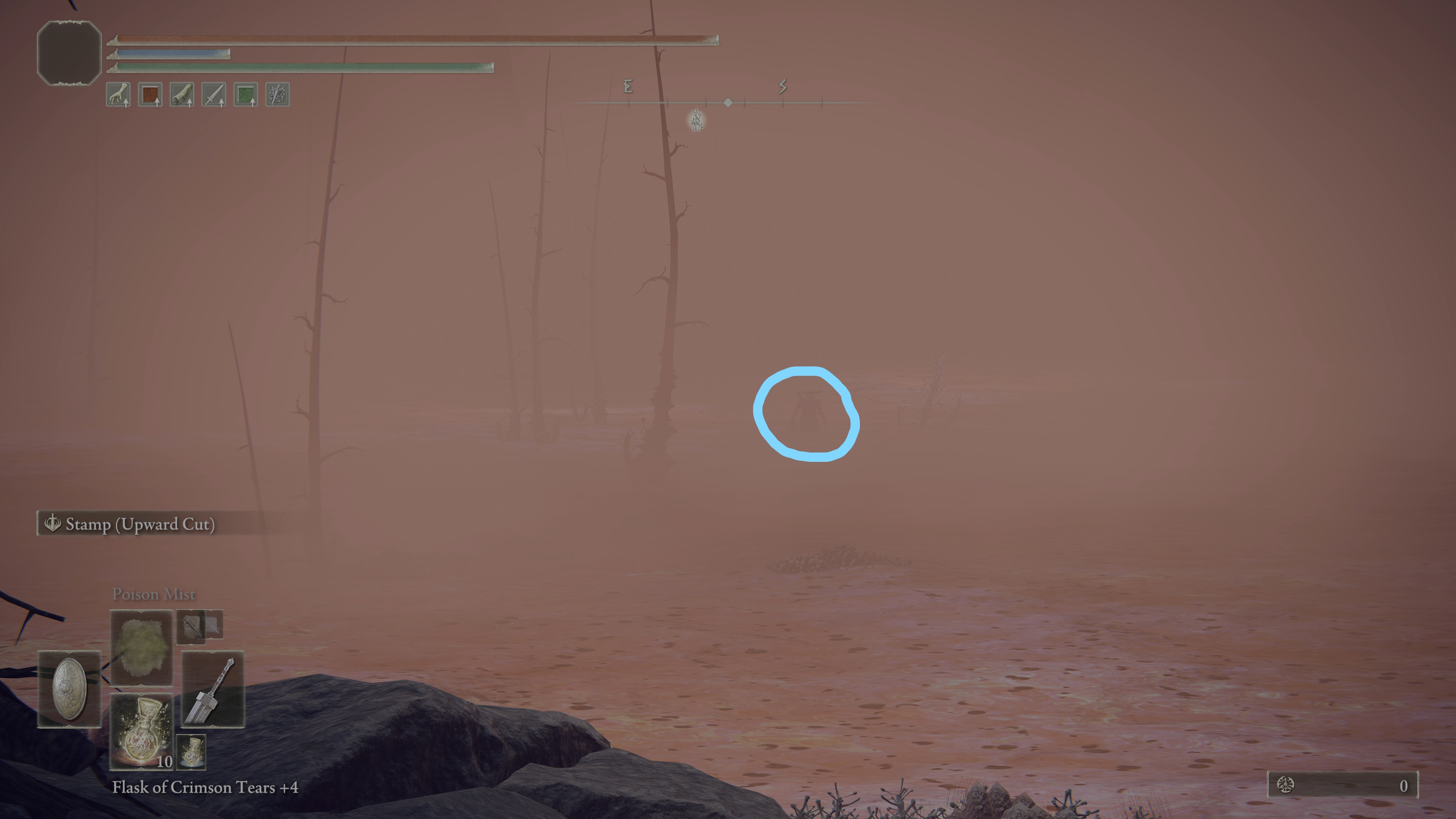 Warp back to the Site of Grace to begin proper exploration.

If you look out into the lake, you may be able to see four pillars standing on their own small island in the distance. These small islands have buttons on them that raise landmasses in the lake, giving you safe platforms to stand on while navigating through the Lake of Rot. The nearest pillar to you right now at the starting island should be to your southwest, and after that, the next one should be south of the first pillar, easily reached by traversing the newly-raised platforms from the first. To reach the third pillar from here, jump onto the platform directly east from the second pillar, then aim southeast and go onto a large platform with the base of a broken pillar. This central platform will serve as a landmark for further exploration. The third pillar is located just southwest from this large platform.

The fourth pillar is located further southwest of pillar #3, closest to the walls of the distant structure. This time, you don't have any platforms to help get you there cleanly, so you'll have to sprint across the rot. Step on the button and you will be raised with the pillar itself. While up here, you can defeat the Alabaster Lord to receive his sword, the Alabaster Lord's Sword, and loot the Somber Smithing Stone (9). There is a slope that leads to a ladder on the east side of the pillar to help you to get down or go back up. The foot of the ramp below this ladder has a Teardrop Scarab that yields a Somber Smithing Stone (6).

If you want, you can backtrack to the large platform with the broken pillar base. Look east, and start sprinting - the boss won't turn aggressive unless you're too close to it. Once you find the eastern pillar and step on it, it will raise several large platforms. This is vital for taking on this area's miniboss, the Dragonkin Soldier. Defeat it for the Dragonscale Blade. From here you can choose to loot bodies scattered all around Lake Rot to obtain items, many of which are Somber Smithing Stone (7) & Somber Smithing Stone (8). Several items of note are the Nomadic Warrior's Cookbook (22) obtained from a lone chest in a large ruin in the southwestern section of the map, and the Mushroom Crown on a corpse hanging off a pillar in the ruins in the southeast corner - to get on top of it, you'll have to ascend a ramp along the walls of the area and then hop onto the rims of the ruins.

After you're done with this area, head over to the southern section, where you'll find a waterfall. Climb down the stairs next to it to reach the Grand Cloister and grab the Grand Cloister Site of Grace. The area here is infested with Lesser Kindreds of Rot and there are a few corpses with Golden Runes. Be wary of drawing the attention of too many Lesser Kindreds of Rot as their multiple casts of Pest Threads can overwhelm even the most skilled of players. These pests can also drop the, Pest's Glaive, which is very good for builds that use elemental infusions. 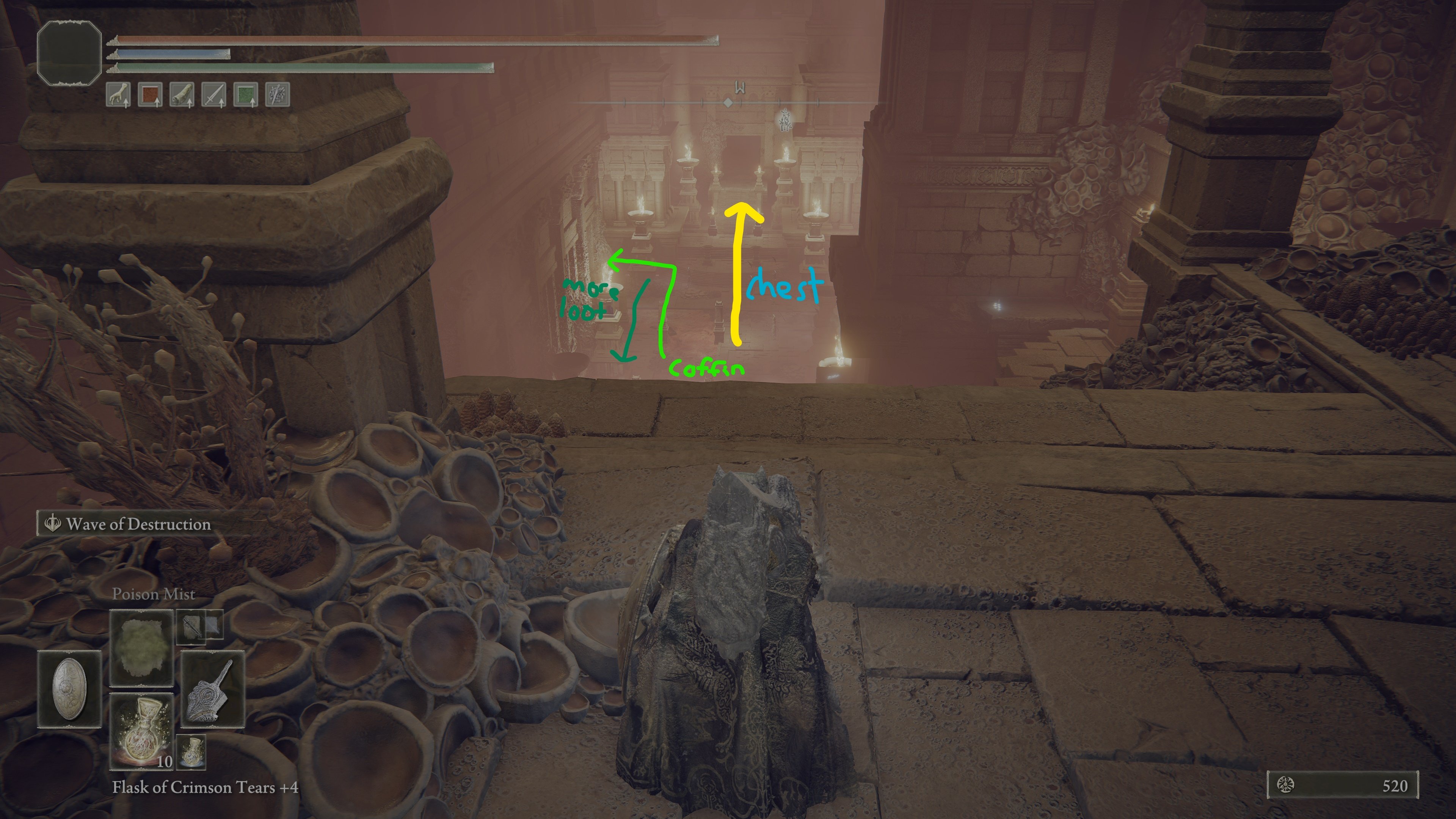 Next, head west, where you'll see a bunch of rot prawns dancing in front of a temple. Carefully dispatch each one from a distance, as getting mobbed by them is incredibly dangerous. When they're all gone, head inside the temple to grab the Scorpion's Stinger. Head back out of the temple and head south, where you'll find an open coffin at the tip of the waterfall. Interact with the coffin to rest in it and a cutscene will play.

Astel, Naturalborn of the Void

If you open your map now, you will find yourself in an isolated area south of the Lake of Rot. Through the mist door, you'll fight Astel, Naturalborn of the Void, and with his defeat, you'll gain the Remembrance of the Naturalborn. Trigger the Site of Grace in this boss arena, then head north past his boss room to find a lift that takes you back to the surface at Deep Ainsel Well. If you don't have the Dark Moon Ring, this passageway will be sealed off.