Online and Multiplayer for Elden Ring contains information on the various features that can be done in online mode. Elden Ring Multiplayer has been confirmed in various forms, from cooperative gameplay in PvE, to PvP and Invasions. Online players can make Gestures that may even include some vocal expression and every player at close range will hear them.

Guidelines, various mechanics and any other online information can be found on this page.

Unique Online Play that Loosely Connects You to Others
In addition to multiplayer, where you can directly connect with other players and travel together, the game supports a unique asynchronous online element that allows you to feel the presence of others.

With the Multiplayer Menu, players can use various Multiplayer Items that allows them to interact with other players.

Players can rate other people's messages. When a message is rated, the HP of the player that left the message will be replenished.

Puts you into a ready state to answer, should someone in another world call for rescue.
You Will be summoned to their world as a hunter.
Multiplayer Will begin once you are summoned.
Your goal Will be to defeat invaders
(Can also be used from the Multiplayer menu.)

Allows you to automatically send out requests for a hunter from another world to rescue you when you've been invaded by a Bloody Finger.
You can also use this after being invaded to summon a hunter for help.
Summoning rescuers may not always be possible.
(Can also be used from the Multiplayer menu.)

With a Furlcalling Finger Remedy, you can see summon signs, which can be used to summon players from other worlds (Finger Remedies are consumed with use)
There are various types of summon signs. Gold signs summon Furled Finger cooperators. Red signs summon duelist adversaries. (For either type of mutliplayer, the summoning player beocmes Host of Fingers)
(Can also be used from the Multiplayer menu.)

Choose a summoned player to send back to their own world.
This player will be removed from the multiplayer session.
(Can also be used from the Multiplayer menu.)

You can leave a gold summon sign to play coopeartive multiplayer.
This sign will appear in the other player's worlds and allow them to summon you as a Furled Finger for cooperative multiplayer.
Your objective will be to defeat the area boss of the world to which you were summoned.
If you leave a second summon sign, the older sign will vanish
(Can also be used from the Multiplayer menu.)

Use to write messages.
Your messages will be conveyed to other worlds, allowing other players to read them.
(Can also be used from the Messages menu.)

You can attempt to invade another player's world.
If you successfully invade, invasion multiplayer will begin, with you as a Bloody Finger.
Your goal Will be to defeat the Host of Fingers.
During invasion multiplayer, Finger Phantoms can be used as items.
You can attempt to re-invade the world you previously invaded.
(Finger Phantoms are consumed with use.)
(Can also be used from the Multiplayer menu.)

Beckons Bloody Fingers to come invade your world.
This allows you to be invaded even without a Furled Finger cooperator present, and reduces the amount of time before re-invasion is possible.
It also allows for a second invader to join multiplayer. (With two invaders, the maximum number of cooperators becomes one.)
(Can also be used from the Multiplayer menu.)

A phantom vision of the first grace, which once guided the Tarnished to the Lands Between.
Lose all runes and return to last site of grace at which you rested.
It all repeats. Be seen by the Elden Ring.
Become the Elden Lord.

In this Elden Ring Multiplayer:  What Elden Ring Co-Op & PvP could be like article, we’ll be looking at the upcoming Elden Ring RPG by FromSoftware and Bandai Namco and speculating on the multiplayer system that you are likely to see based on past releases. Does Elden Ring have Multiplayer? Is there co-op and pvp? Will there be invasions or leaderboards? We explore all these concepts and more!

Some information around this has been confirmed, but keep in mind most of this is guesswork based on past FromSoftware games and development and market trends.

Via the trailer released during the Summer Game Fest show, multiplayer has been confirmed as a feature in Elden Ring. It can be seen how a player uses a stone-like object, to summon to blue ghosts or phantoms. 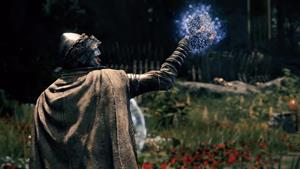 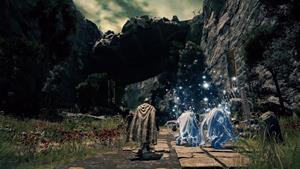 The Multiplayer of Elden Ring

The big question is whether there will be multiplayer in Elden Ring – but to us this is a given. FromSoftware stated that “Elden Ring is a third-person action RPG with a fantasy setting… gameplay is not so far from Dark Souls… Elden Ring belongs to the same genre.” To us, this means we can expect Elden Ring to be to Dark Souls what Dark Souls was to Demon’s Souls, and what Bloodborne is to both – a re-imagining and reapplication of similar mechanics and systems. Since multiplayer is such an integral part of the gameplay of these games, we don’t see that changing for Elden Ring.

The Multiplayer Features we fully expect to see in Elden Ring

So, if we establish there will surely be multiplayer, what will it look like? Let’s look at the previous games for some basics.

Souls games have an engaging and addicting no-hassle drop-in multiplayer system. In a departure from trends, FromSoftware souls games did not provide you with a lobby or party mechanic, but instead gave simple and somewhat cryptic signs that allow you to summon silent companions that can only communicate via gestures. This design came as FromSoftware’s Hidetaka Miyazaki believed games and gamers were “overcommunicating”.

Given that this philosophy hasn’t really changed across Demon’s Souls, Dark Souls or Bloodborne, and has been successful in souls-like games such as Nioh and Code Vein, we expect that a similar approach will be taken for Elden Ring.

This means that you should expect to see drop-in multiplayer featuring both allies and enemies, revolving around your interaction with elements of the world that invites these players into your domain.

Further, given the progressive steps to limit “harassment” pvp, we expect to see measures to avoid invasions or hostile play, and provide a structure for those who want to focus on PvP to fully engage with it, be it in an arena or by auto-summon covenant mechanics.

The Netcode of Elden Ring

A big issue with the Souls games was the P2P system that makes up for the backbone of the multiplayer elements. Out of all the games, Demon’s Souls is the only one that had dedicated servers, and these were discontinued with time due to the ongoing cost of keeping them online.

Given Bandai Namco would have to pay for the servers, we think the P2P system will be making a return, but perhaps with some modern twists such as the “dedicated connection servers” that Dark Souls 3 had, as well as region matchmaking and – if we’re lucky, ping lockouts for PvP.

The multiplayer in souls was integral to gameplay and replayability and we expect Elden Ring will be no different. Since the previous P2P approach has been successful, we do not see a big push to try a completely new setup. Therefore, you should be expecting to feel right at home planning your lagstabs and rolling your way through with as many iframes as you can find amid your packet loss and the ever reliable phantom range.

Elden Ring Multiplayer: What could be completely New

So if the previous system works so well, and the P2P is likely to return, what could be enhanced, improved or changed to spice things up? We have some ideas.

FromSoftware has experimented with “punishment” mechanics before, so adding a “hunted” status to players who perform evil actions and introducing special rewards could be an easy next step to up the stakes of pvp, perhaps a little beyond what the Book of the Guilty gave us in Dark Souls.

Another interesting addition could be to up the ante on the “defender” covenants to also include the day-night and weather cycles of the game, and provide different bonuses to combatants based on them. For example, if there were a “Warriors of Sunlight” covenant, it would be quite fun for them to get more powerful on a sunny day, and be weaker to damage during the night.

For co-op players, implementing a more advanced reputation system regarding helpfulness and knowledge could spice up and encourage those who love to praise the sun and give them a separate progression based on their multiplayer activities. This could be done similarly to the original Demon’s Souls player rating system, that allowed hosts to rate a phantom after a co-op session, and this rating was displayed alongside your summon sign.

Asynchronous play could also get some inspiration from successful ideas by other developers. One such example are Nioh’s revenants, that leave behind an AI version of your character for PvP and the Blue Graves that provide an AI companion based on your character that can help players while you’re doing something else.

Additionally, a Nemesis system could be introduced, bringing strong and challenging monsters to your world based on other player’s deaths, and providing special rewards if you manage to defeat the invader.

For co-op players, another “out of the box” improvement could be to include a shared life meter, much like Nioh’s expedition system. This allows for players to quickly revive each other if one falls, thus preventing the abrupt end of a co-op session, but depletes for everyone if someone actually dies. It’s certainly a good system for large environments where there may be large and difficult stretches between checkpoints.

And of course for the ones who want to play with friends, it would be very interesting to see a party system, so your summon doesn’t automatically return when their task is completed, and can select to continue onward exploring with you. This would provide a seamless co-op experience for the game, perhaps even allowing your summon to use acquired currency and adjust stats or equipment.

So what do you think?

We would really like to see the “FromSoftware twist” on some of these ideas. FromSoftware could take these simpler PvP and Co-op concepts that work so well and expand on them to bring a multiplayer progression ladder that keeps the game going long after you have finished the last boss by introducing material farming, unique items and special skills or rewards available by redoing bosses during coop, changing your “character tendency”, defeating other players or changing a “world tendency” or “world event”.

And now we want to know what you think: What will the Multiplayer of Elden Ring be like? Are you expecting something completely different from Dark Souls? Or similar but renamed, like Bloodborne did. Do you expect to see the same netcode and P2P? What are your most wanted changes to the system, and what do you really, really want to keep the same? Let us know in the comments