Classes for Elden Ring are the starting archetypes available to the player. All Elden Ring Classes follow similar concept to that of the Dark Souls series, choosing a class determines the player's starting Stats and Equipment which can then be improved and upgraded later on as you progress throughout the game. This page contains a full list of all the classes in the game.

What is the Best Class in Elden Ring?

These are the Elden Ring Classes available on the Closed Network Test. The Full launch of the game will see a total of 10 classes, that may vary in name and starting equipment from the ones available during pre-release. Body type A is male, and Body Type B is female. 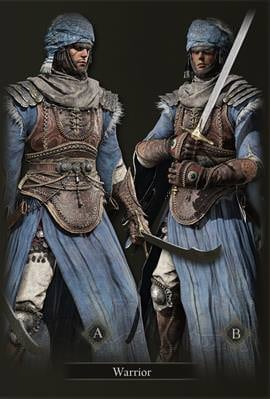 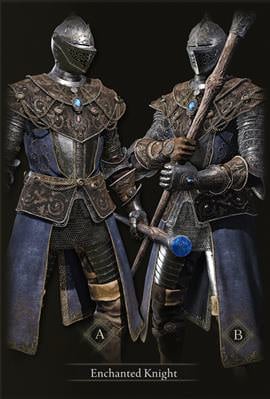 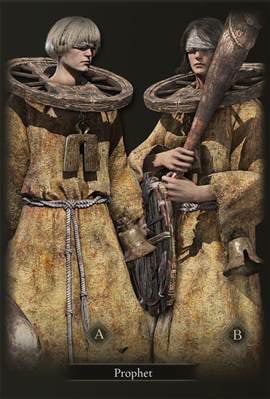 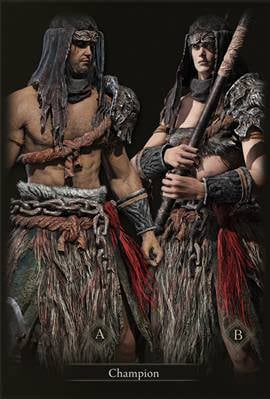 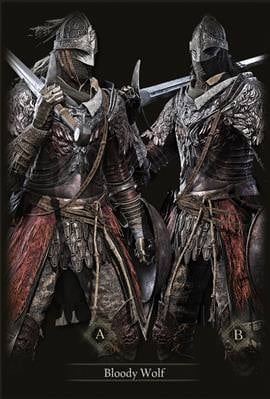 This Class Comparison table helps players identify the relative strengths and weaknesses of the starting classes of Elden Ring.

These are the Stats symbols for the game, representing the many attributes the player will spend Runes to level up and improve performance.

In this Elden Ring Classes: What Elden Ring Character Progression could be like article, we’ll be looking at the upcoming RPG by FromSoftware and Bandai Namco, speculating on the class system that we are likely to see based on past releases. Some information around this has been confirmed, but keep in mind most of this is guesswork based on past FromSoftware games and development and market trends.

The Classes of Elden Ring

Souls games have had an interesting approach to character creation and classes historically. They don't force you to pick a class and then lock you to its specific equipment, strengths, abilities or skills, but rather gives you a starting point and starting gear. Where you go from there is entirely up to you, so you may start as a sorcerer and end up a “slightly less than optimal” strength build. But that is part of the fun.

Additionally, Soulsborne games have traditionally had recurrent archetypes, with some minor variations and new additions as time went on.

The classes we’re absolutely expecting to see are:

Knight – This class has been a staple of the series and is present in every souls title. This archetype gives the player a tanky starting point, and is usually the best starting class for new players because it can take more hits while still dealing reasonable damage. For comparison, this is likely the “Lone Survivor” of Bloodborne.

Warrior – Another class that has been in all the Soulsborne games (“Soldier” in Demon’s Souls and “Military Veteran” in Bloodborne), the Warrior is a STR/DEX mashup for those who want to go for melee damage builds.

Sorcerer – Available in all the previous games (Magician/Royalty in Demon’s Souls and “Cruel Fate” in Bloodborne). The sorcerer is the basic mage archetype for those looking to make a magic and sorcery-focused build.

Thief – Also present in all games (“Professional” in Bloodborne), the Thief is a high Dexterity class that also brings about some magic tricks. This class is meant to be played as a rogue with stealth spells, focusing on criticals and such.

Deprived – The weakest class in all games (Barbarian in Demon’s Souls and Waste of Skin in Bloodborne), the Deprived is a minimalistic class that offers a blank slate for the player to build upon. With a tougher starting point given its scarce equipment, the deprived is often a good choice for challenge runs or specific level-optimized pvp builds.

Other classes with recurrent themes are “Herald” or “Temple Knight”, which essentially gives Faith properties to a Knight build and a high Dexterity “dual wield or high crit” archetype (mercenary, swordsman, wanderer, etc).

The Character Progression of Elden Ring

So if we’re guessing that the game will follow a similar class structure, obviously with some new ones given that they will surely add magic types or experiment with new starting offerings, we are also assuming the character progression system of Elden Ring will be somewhat similar.

An official interview cited: “No main fixed protagonist, players create the characteristics and personality of their character.” This likely means that character creation will have a similar spin to the previous Souls iterations, but also introduces the possibility of a “personality” trait or character alignment. This may be a throwback to the “Character Tendency” of Demon’s Souls, or manifest in different ways via Factions or Covenant allegiances, which we will explore in a separate article.

For now, let’s list out the stats we will surely be seeing make a return:

Soul Level – This is a given. We will be leveling up and our Attributes and parameters will increase as we go. I fully believe we’ll also see softcaps and hardcaps on stats, much like on other games.

Vitality – Dark Souls 2 got a bit confusing there for a second with “Vigor” and “Vitality”, but overall we will be seeing a stat that focuses on giving you more HP and being tankier in general. In Dark Souls 3 and 2, this stat also served the purpose of increasing the maximum equip load of the player, which is not the way it works in Elden Ring, as Strength now increases the maximum instead. Whether they add a separate one for physical defense is anyone’s guess, but Bloodborne went in a more simple direction by condensing stats, and I think that was a wise choice.

Endurance – All the games have had this stat as it is integral to the stamina-based combat of the game, so we will certainly see some variant of this. Of that you can be sure.

Strength, Dexterity (Skill), and Intelligence/Faith (Arcane) – All games, including Bloodborne, have weapons and magic that revolve around the trinity of “Slow and Strong”, “Fast and Skillful” and “Magical”. They may add some new variants similar to the way Bloodborne did with Bloodtinge, or sub-divide magic and faith into further “dark magic” and “dark miracles”, but the concept continues to follow the “Warrior / Wizard / Rogue” basics of D&D, and we expect no different from Elden Ring.

Luck – All the games have some variant of a luck stat, which has become a joke among the community (until you watch someone first try Nameless King with Anri’s Straight Sword and you wonder how much you’ve been missing out on). We fully expect this stat to return, and for Elden Ring to provide some specific weapons that work extremely well with it.

Other stats that will be making some sort of return are likely to be Attunement or something to increase your MP, as well as some form of a Poise mechanic. And of course you can expect to see Status Effects such as Curse, Bleed and Poison return – but it’s also likely we will get some newcomers like burning, lightning, etc.

Elden Ring Character Progression: What could be completely New

It is interesting to note that, while the Souls games have kept to a quite predictable formula for character progression, FromSoftware has experimented with different applications of it and even created an entirely non-rpg system of progression for Sekiro: Shadows Die Twice. They are also working on this title for Bandai Namco (who owns the Elden Ring IP), and the Bandai studio had developed a souls-like stat system with a completely different implementation in Code Vein.

The Blood Code system of Code Vein introduced the idea of “class swapping on the fly” which allows you to create a completely different build while keeping your accrued levels, simply by swapping your base equipment and the associated skills. Since Dark Souls 3 featured weapon skills and Sekiro focused on them almost entirely for combat, it is possible that some permutation of them will be present in Elden Ring, and From could take a note from Code Vein and allow players build variation within the same character without the restrictions or penalties of previous games.

Another Souls-like that introduced an easy re-roll system is Nioh, that has Equipment Sets and Build Slots that you can save and reload – giving you the opportunity to try many builds on one specific character. This is another way that players could quickly change up their Build, allowing for on the fly customization.

But even if some form of Blood Codes or Load Outs don't make it into Elden Ring, one thing that other RPGs have historically had, and Sekiro: Shadows Die Twice touched upon, is Skill Trees. I've always felt the Souls games were lacking just a tad in the customization department, and felt Sekiro was a step in the right direction in this one specific regard, by allowing you to choose which Skills you wanted to spend points on. There was obviously less customization in Sekrio as a whole, but the Skill Trees themselves may be the missing link in Elden Ring.

How cool would it be to give players even further character depth by allowing them to take passive or active abilities that further enhanced their playstyle, and added a new dimension to their Build? It would add new ways to play, and could provide even more reason for players to play Elden Ring a second or third time.

One thing that's not really been a factor in From Software titles is Races. We haven't really seen different types of characters, and this could just be because the games have always focused more on the human nature of things, but in a game that has lore written by George R.R. Martin, one has to wonder if they won't make an appearance.

Races could simply be cosmetic, changing the size and look of the character. But they could also have other implications, such as Racial Bonuses, or faction allegiance. In a game that has been quoted to be about politics, racism and nationalism, one has to wonder how Elden Ring could even exist without Races...

Of course some may say that these systems would not work with the Souls series, that is more focused on permanent decisions and having to think hard before committing. But we have seen those punishing systems eased up with time, with wandering characters not becoming as angry as quickly, or having “graves” for you to undo your mistakes, to outright preventing you from killing important NPCs. Not everyone agrees with these changes to be sure, but there is no doubt that Dark Souls 3 is the most played of the Soulsborne games, though I think Bloodborne would have been if it was not an exclusive.

So now we want to know what you think: What will the Classes, Stats and Character Progression of Elden Ring be like? Are you expecting something completely different from Dark Souls? Or similar but renamed, like Bloodborne did. Do you expect to see the same class and stat progression or fixed classes with skills? What are your most wanted changes to the system, and what do you really, really want to keep the same? Let us know in the comments below.