Endings for Elden Ring contains different conclusions of the game that depends on the player's actions/choices made throughout a completed playthrough. These endings unlock different achievements and outcomes of the game's story. A few Endings will have a few actions and requirements before they can be achieved. Some actions in the game could potentially lock yo out of some of the available Endings so consider all possibilities before killing any NPCs to receive their drops. This Elden Ring Endings Guide contains all the endings found in Elden Ring, including their requirements, frequently asked questions about the endings, and each ending explanation. Players can explore the 6 endings of the game. To further delve into the backtroy and explanations of the game and story, players can view the Lore page which contains collected excerpts and official scripts from the games as well as some player theories contributed by the community.

Can you get all the endings in one playthrough?

It is only possible to get all endings in one playthrough if you save before the final boss, upload your save data to the cloud, complete an ending and then download the previously uploaded save file and repeat until you have the trophy/achievement for the three endings. So far this method is possible on Steam, PS4/PS5, and Xbox One/Series. You are unable to obtain all endings in one playthrough without editing your save files; once you choose an ending, you're locked into it for the playthrough. You will have to obtain the other endings and their respective achievement/trophy in subsequent playthroughs (NG+).

With the exception of one ending that will explained below, you can work towards and complete all the relevant quests required for each ending without being locked to it. After beating the final boss, you can choose which ending you want to go for out of the endings you've unlocked.

How do I get Rid of the Chaos Ending Elden Ring?

At this point, the question suggests that you have met with the Three Fingers to inherit the Frenzied Flame. To reverse this, Millicent must be alive and you must have progress through her questline in order to obtain Miquella's Need. You will need Miquella's Needle which can be obtained after completing Millicent's questline, and returning the Unalloyed Gold Needle to the Scarlet Aeonia left after Malenia, Blade of Miquella's fight. Miquella's Needle is used at Dragonlord Placidusax's arena at Crumbling Farum Azula to reverse the Three Fingers' flame of frenzy. This is the only way to undo the Lord of Frenzied Flame ending. To use it, simply select it from your inventory anywhere in the arena. Fighting Placidusax is NOT necessary to use the needle, simply being at the boss arena will do.

Elden Ring Endings Guide: How to get All Endings in Elden Ring

The Age of Fracture ending is the default ending of the game, where the Tarnished chooses to mend the Elden Ring as it is and begin the new age as Elden Lord. 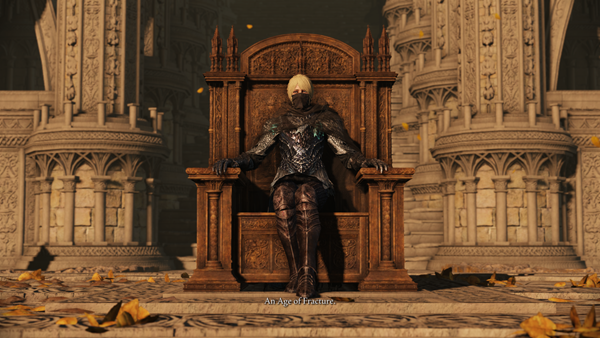 "The fallen leaves tell a story
Of how a Tarnished became Elden Lord.
In our home, across the fog, the Lands Between.
Our seed will look back upon us, and recall.
An Age of Fracture."

After using the Cursemark of Death on Godwyn's corpse to give him a second life as the First of the Dead, Fia lays with him and bears the first of Dead demigods - in the form of a rune. In the Age of the Duskborn Ending, the Tarnished chooses to use this Mending Rune of the Death-Prince to begin a new age of Duskborn as Elden Lord - where the Lands Between are engulfed in a harrowing fog and the principle of life within Death is embedded into Order, ridding the world of immortality and allowing the natural cycle of life and death to occur for all people and creatures alike. 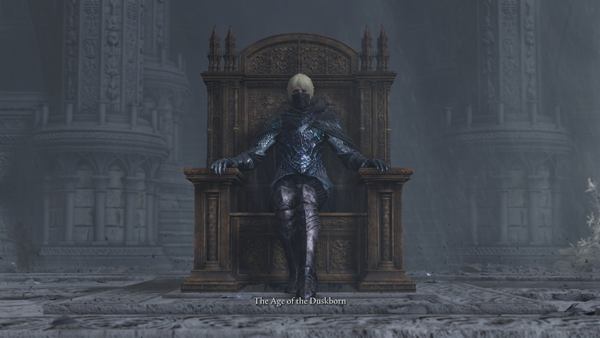 "The fallen leaves tell a story
Of how a Tarnished became Elden Lord.
In our home, across the fog, the Lands Between.
Our seed will look back upon us, and recall.
The Age of the Duskborn."

The Age of Order Ending is an alternative version of the Golden Order ending, where the Tarnished chooses to use the Mending Rune of Perfect Order on the Elden Ring to restore order to the Lands Between by putting an end to all the strife caused by forces "emboldened by the flames of ambition".

The noble Goldmask once lamented that "all the good and the great wanted, in their foolishness, is an absolute evil to contend with", implying that one who seeks greater power to further his or her ambition will, in all likelihood, presents himself or herself as the greater good and condemn the other side as the absolute evil. Each will accuse the other as committing heresy. Strife would ensue, plunging the Lands Between into chaos and unending conflicts.

The Age of Order thus envisions a new age of stability, where there is no more conflict brought upon by the "fickleness of the gods no better than men" which was "emboldened by the flames of ambition". 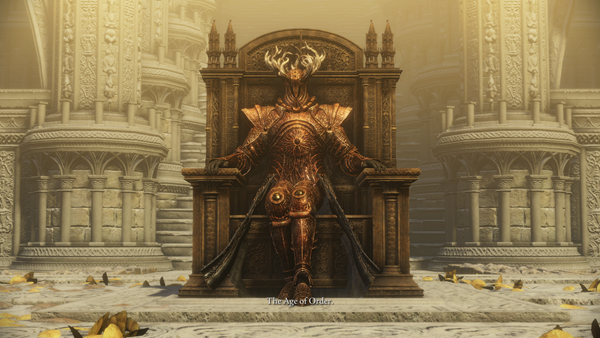 "The fallen leaves tell a story
Of how a Tarnished became Elden Lord.
In our home, across the fog, the Lands Between.
Our seed will look back upon us, and recall.
The Age of Order."

The Blessing of Despair Ending is an alternative version of default ending of the game, where the Tarnished chooses to use the Mending Rune of the Fell Curse and begin the new age as Elden Lord - the difference being, now, the Lands Between has now been overtaken by a reviled curse. While the details of what the curse brings isn't fully explained, it is the same curse brought from Dung Eater's defilement, causing defiled souls to be unable to return to the Erdtree. With the fell curse embedded in the Elden Ring, all present and future generations will be afflicted with this loathsome curse. 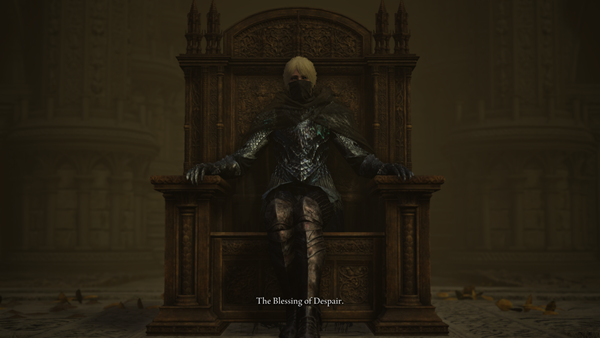 "The fallen leaves tell a story
Of how a Tarnished became Elden Lord.
Our seed will look back upon us, and recall.
In our home, across the fog, the Lands Between.
The reviled curse that defined our age.
The Blessing of Despair."

Lord of the Frenzied Flame Ending

If the player obtains the Frenzied Flame after the events at the Forge, the scene with Melina does not occur, due to her own prior sacrifice.

As explained by the Three Fingers through Hyetta at the end of her quest, this ending sees the Tarnished take up the mantle of the Lord of Chaos, and tasked with burning the world, along with the mistakes of the Greater Will - all existing sin, torment, fracture, and curse - to unite everything and everyone much like the crucible which existed before time. 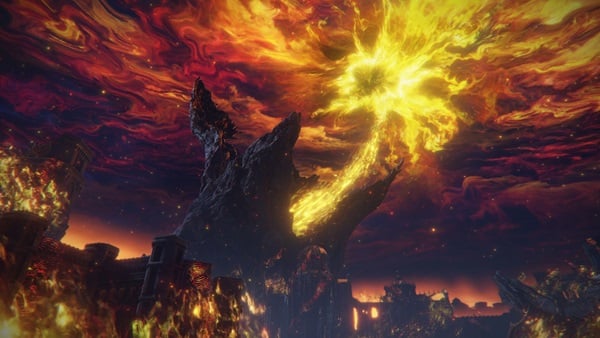 "Lord of Frenzied Flame...
I will seek you, as far as you may travel...
To deliver you what is yours,
Destined Death"
- Melina

Age of the Stars Ending

In the Age of the Stars Ending, after defeating the Elden Beast, instead of mending the Elden Ring, the Tarnished summons Ranni the Witch in front of Marika's remains.
Ranni supplants Marika as Goddess and takes The Tarnished as her Elden Lord.

She brings an end to The Golden Order, establishing an Order of her own (not named but likely similar to the Order of the Dark Moon, which we currently know little about).
In doing so she also removes the influence of The Greater Will from The Lands Between.

She leaves The Lands Between together with The Tarnished and takes her Order with her, on a journey meant to last a thousand years.  As a result of her absence, The Lands Between is left without a lord for the first time in an age.

In her final cutscene she states the following:
"...The battle is over, I see.
I do solemnly swear. To every living being, and every living soul.
Now cometh the age of the stars.
A thousand year voyage under the wisdom of the Moon.
Here beginneth the chill night that encompasses all, reaching the great beyond.
Into fear, doubt, and loneliness...
As the path stretcheth into darkness.
Well then. Shall we? My dear consort, eternal."

Once her questline has been fully cleared, it is possible to go back to her room and talk with her doll, where she further explains her plans with the following dialog:
“Upon the order I envision.
Mine will be an order not of gold, but the stars and moon of the chill night.
I would keep them far from the earth beneath our feet.
As it is now, life, and souls, and order are bound tightly together, but I would have them at a great remove.
And have the certainties of sight, emotion, faith, and touch…
All become impossibilities.
Which is why I would abandon this soil, with mine order.
Wouldst thou come to me, even now, my one and only lord?”

She initially planned to go alone, living in solitude for 1000 years. This is suggested by the description of her Dark Moon Ring:
"Whoever thou mayest be, take not the ring from this place, the solitude beyond the night is better mine alone."