Misbegotten Crusader is a Field Boss found in Cave of the Forlorn, just south of the Minor Erdtree in the eastern Consecrated Snowfield, at the end of the frozen river

The Best Tips for Misbegotten Crusader:

This boss may look like any other Misbegotten boss and has a similar moveset to the Leonine Misbegotten, but it deals greater damage with additional Holy damage and with its attacks using the Golden Order Greatsword. It does a number of fast moving aggressive attacks while advancing towards you. If you have a shield use it against these combo attacks while backing up. It will be even better if you have a shield that could defend against holy damage. When you have a chance, towards the end of the attack combos, roll through and toward the boss in order to deal a few hits. Use a combination of rolling in and attacking during the small windows, then immediately backing up again. You will especially have to look for its large AoE attacks which can occur within combo attacks. The main strategy here is to keep a defensive stance while preparing to dodge away then quickly approach during each opening. Be conservative with your attacks until the boss is defeated.

With a magic build, you may want to use quick moving spells such as Glintstone Pebble or Glinstone Stars. Keep in mind that when you distance yourself for this encounter, this boss quickly can close that distance with his quick lunges and could reach your with its holy ranged attacks. You will have to keep moving and constantly be prepared to dodge to the side. Attack sparinginly and in between its attacks to avoid being unprepared for an incoming attack. 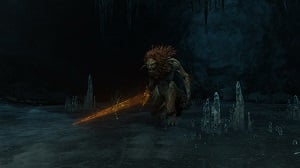