Grafted Scion is a Field Boss in Elden Ring. Grafted Scion is an amorphous mass of bodies that wields two swords and a greatshield, found in various locales, most prominently in Stormveil Castle. This is an optional boss as players don't need to defeat it to advance in the game.

Grafted Scion is a Field Boss found in the Tutorial Area (Chapel of Anticipation). It also appears in Stormveil Castle, Fringefolk Hero's Grave, Liurnia of the Lakes, and Mt. Gelmir.

The Best Tips for Grafted Scion:

When getting up close and personal, you have to take into account two important details about this fight. First, Grafted Scion has a shield, and will use it to mitigate damage, and the second detail you need to keep in check is spatial awareness. You can drop off the cliff on your left side, falling to your death.

The strategy for melee is to keep your distance and try to bait him into his jumping attack, rolling through this attack and hitting him a couple of times before resetting. The only other attack you can safely hit after is his spinning whirlwind attack, but this is hard to Block and Dodge without taking damage so it can be hard to land attacks after.

He tends to hit in long erratic combos, so you cannot just hold Block and prevent damage. You'll need to mix in rolls to prevent being guard broken and to create separation so that you don't take damage. The tight spacing can make this difficult. If you have an Ash if War that has range, such as Glintblade Phalanx, then this fight is can be much easier.

Keep your distance if you can and use your spells when he is NOT attacking to deal damage, and then Block and Roll to avoid his combos. Try to stay as far away as possible from him so that you have the most time to cast, and if you're having trouble getting Glintstone Stars off, switch to Glintstone Pebble for faster casting. It'll do less damage, but it's easier to fire off. Make sure you use a Shield in your off-hand. 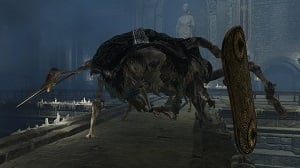 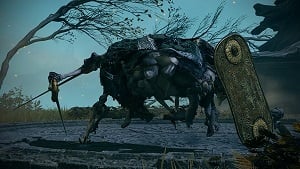