Regal Ancestor Spirit is a Legend Boss in Elden Ring. This animated carcass of a deer-like creature is encountered in the Hallowhorn Grounds found in Nokron, Eternal City. This is an optional boss, as players don't need to defeat it in order to advance in Elden Ring.

Ancestral spirits exist as a phenomenon beyond the purview of the Erdtree. Life sprouts from death, as it does from birth. Such is the way of the living.

Ancestor Spirit is found in an isolated arena accessible from Nokron, Eternal City. To access it, you must light all six obelisks by the stairs to the Hallowhorn Grounds northeast of the Ancestral Woods Site of Grace. When you've done so, the deer carcass at the back of the temple will glow and you can interact with it to teleport just outside the boss's arena. Walk through the fog gate to fight the boss.

The altars you need to activate can be found in the following places (see the main Nokron, Eternal City wiki for more information): 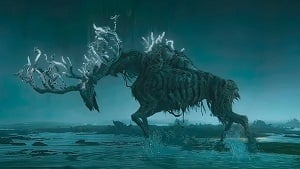 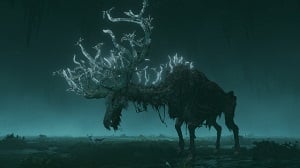