Astel, Naturalborn of the Void is a strange alien lifeform comprised of many-colored star debris which landed in the Lands Between long ago, and is found in Grand Cloister, Lake of Rot. Astel destroyed one of the Eternal Cities and wiped out their sky. Seeing as how both the Eternal Cities of Nokron and Nokstella still have their starry night sky, it is possible that the Nameless Eternal City that the Site of Grace in Deeproot Depths was named after was Astel's unfortunate target.

This boss is optional, as players don't need to defeat it in order to advance in Elden Ring, but it is a required boss for reaching the Moonlight Altar and completing Ranni the Witch's questline. It drops the Remembrance of the Naturalborn when defeated.

A malformed star born in the flightless void far away. Once destroyed an Eternal City and took away their sky.
A falling star of ill omen.

Astel, Naturalborn of the Void is a LEGEND Boss found in Lake of Rot. Elden Ring Interactive Map Link

Astel, Naturalborn of the Void can be found by Grand Cloister. Upon reaching this Site of Grace you have to go down towards the small river of Scarlet Rot. By staying on the left side of the grand structure, you'll see a coffin which will take you in front of the Boss Room fog wall. See it on the Elden Ring Map here.

The resistance numbers are the buildup amount to trigger it. For example, if a resistance is 100 you must deal 100 points of whatever aux buildup to trigger it. Note that these go down over time, and increase each time the effect procs. Poise regenerates after 6 seconds without any hits or upon a poise break.

The Best Tips for Astel, Naturalborn of the Void:

At the start of the encounter it will likely fire a laser that can deal massive damage to you on the spot. Dodge through it and, if you want it, summon your Spirit Ashes. Dodge through its attacks up until you reach it and, by then, stay on its head while dodging every attack. It has a lot of AOE skills that might one or two-shot you so stay on a safe side and slowly chip away its HP. If you summoned your Spirit Ashes - they'll often distract him which gives you plenty of opportunities to get some attacks in.

Don't get hit by its bite attack. It'll be indicated by the mandibles glowing purple on its face. It is easily dodged but can deal massive damage if it connects.

Around 50%, Astel will teleport away and cast Meteorite of Astel on you. Dodge through them or run towards the sides, as even one of them can break through your guard and deal heavy damage. The fight itself doesn't change as its HP goes down, so if you're doing everything right, you'll have it downed in no time.

Longbow users may use Poison or Rot Arrows to trigger either status effects. You must hit Astel several times in a row to proc the status ailment, missing too many shots will allow its poison or rot buildup to go down faster than you can build it. If you have enough HP to tank a few hits, the Pulley Crossbow can apply status effects very fast. The status effects can be reapplied again once they have worn off. The Ash of War: Enchanted Shot is highly recommended while using these arrows to ensure you are not missing and wasting them. While it is poisoned or rotting, you may continue to do ranged battle with regular arrows. You can also conserve FP by switching down to R1 attacks. With the Arrow's Reach Talisman, you can ensure these R1 attacks will land without damage loss due to distance, giving an acceptable chip damage if your Longbow is at least +12.

For magic users, A high-intelligence build can do a lot of damage in a short period of time. Using Comet Azur with a Flask of Wondrous Physick (Cerulean Hidden Tear + Magic-Shrouding Cracked Tear) after dodging the initial attacks is a good combination to try. After this attack, try staying at medium-long range where a sorcery like Great Glintstone Shard can hit him. If you use these types of spells, you can attack quick enough to dodge many of its attacks while still doing fairly decent damage. For lower intelligence casters, Night Maiden's Mist isn't a terrible option, although it is decently fast and can move out of it from time to time. Pairing the mist with glintstone pebble can make efficient use of your FP without needing much investment. Additionally charged Shard Spiral can deal a ton of damage provided you stay close to the boss (make sure to equip Godfrey Icon if using this strategy for 15% extra damage).

Astel, Naturalborn of the Void Lore, Notes & Other Trivia 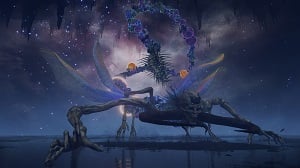