Deeproot Depths is a Location in Elden Ring. The Deeproot Depths region is found underground, and accessed by resting in a coffin after defeating the Valiant Gargoyle in Siofra Aqueduct, or alternatively, through a hidden passage near the Frenzied Flame Proscription grace in the Subterranean Shunning-Grounds. From the Cathedral of the Forsaken grace (after defeating Mohg, the Omen), head through the hidden passage behind the chest and make your way to the Frenzied Flame Proscription grace at the very bottom. Roll into the southeastern wall to reveal a hidden passage with a chest, and roll into the wall behind the chest to reveal yet another hidden passage and the Root-Facing Cliffs grace.

You can use your mount in Deeproot Depths.

At the very depths of the Erdtree's majestic roots lies the source of the Ainsel and the Siofra rivers. Here too begins the network of Greattree roots that spread throughout the Lands Between. 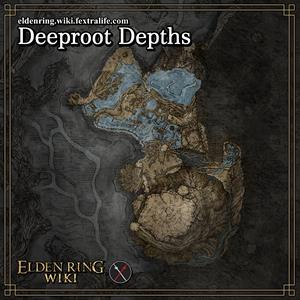 All NPCs and Merchants in Deeproot Depths

Taking the coffin from Siofra Aqueduct brings you to a spot just across the Great Waterfall Crest Site of Grace in Deeproot Depths. Head west from this Site of Grace and right off the bat you'll encounter an Erdtree Avatar. Defeat it and it'll drop the Staff of the Avatar. 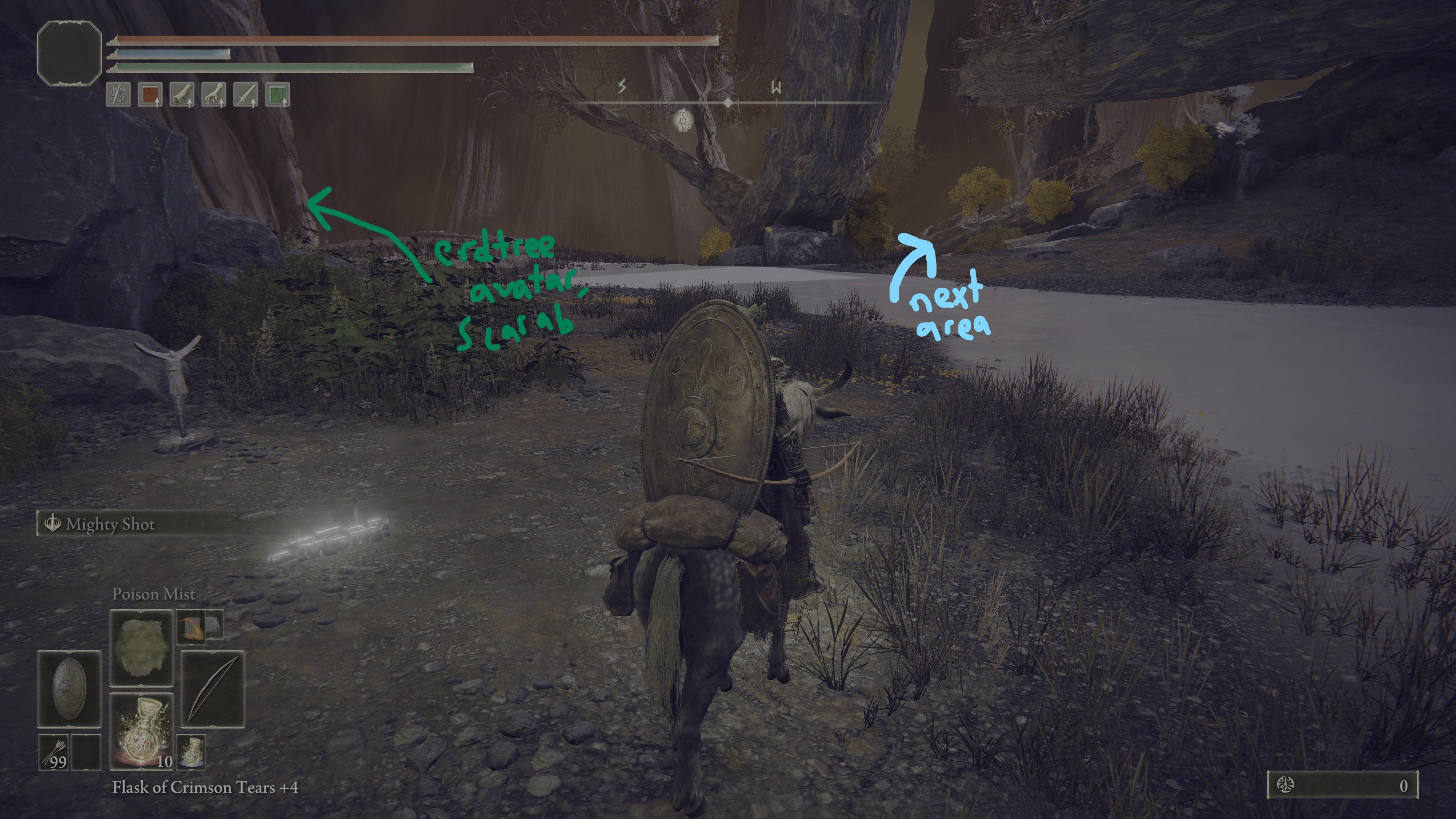 In the area, you'll also be able to find a Ghost Glovewort (4) and a Teardrop Scarab that drops the Ash of War: Golden Land when defeated. From here, the way forward is by crossing the nearby tree roots to the west. While you're crossing the roots, look to your north-west and you'll be able to spot a cave filled with Giant Ants. (You can see the exit with an item further ahead, the entrance is closer to where you began, at the end of a branch.) Get to the end and you'll find the Elden Stars Incantation. Head back to the roots and cross to the other side. 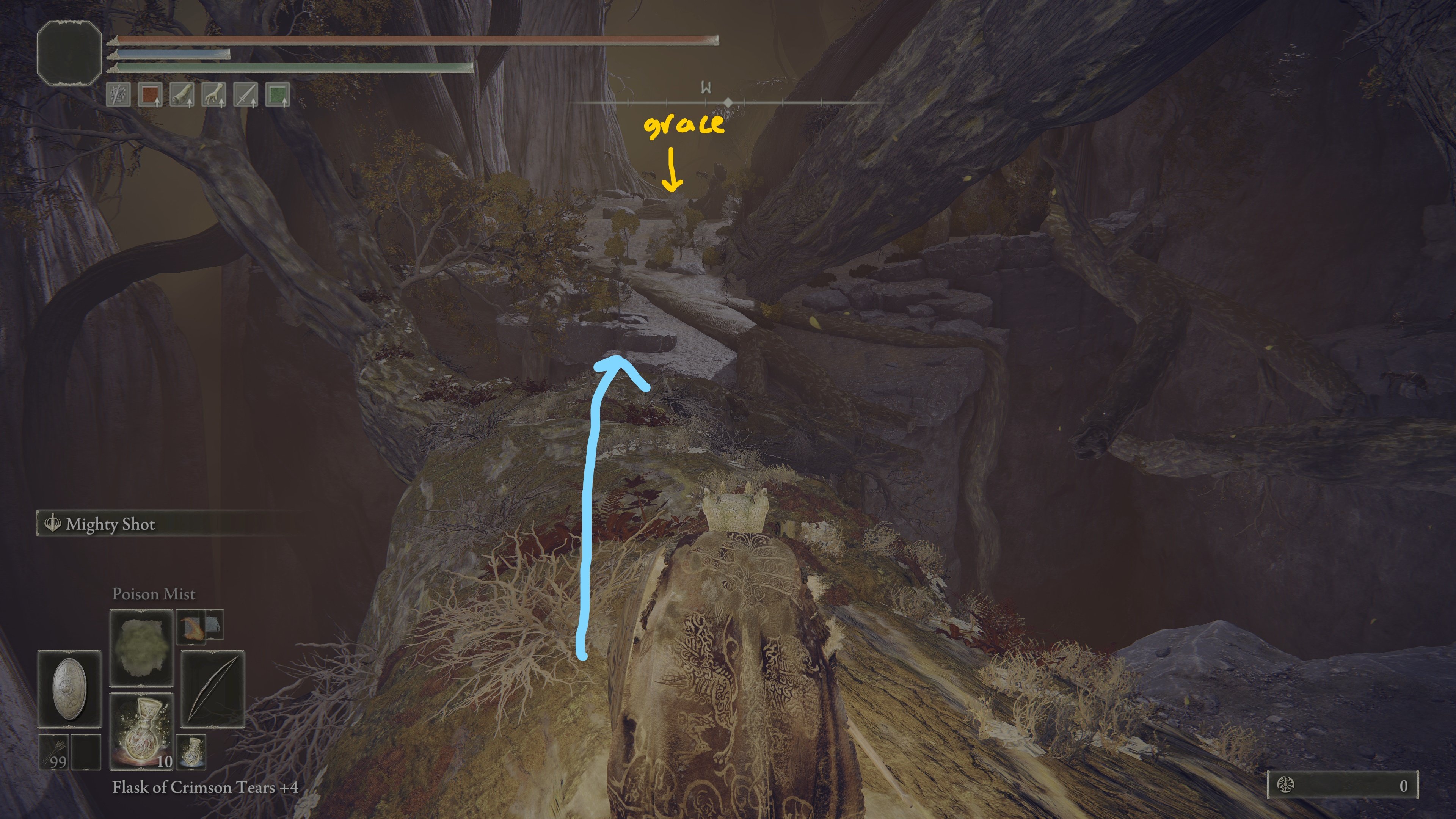 When you get back on land, just slightly ahead are some flying Giant Ants. The bodies they're guarding have three Warming Stones, a Golden Rune (6), and a Smithing Stone (4). Be sure to grab the Ghost Glovewort (4) nearby too. Further west is the Deeproot Depths Site of Grace and a Finger Reader Crone right next to the cliff. Head north to find a ruin filled with Basilisks, a Smithing Stone (6), and a Rune Arc. Further north is a larger ruin structure where you'll find a gazebo. 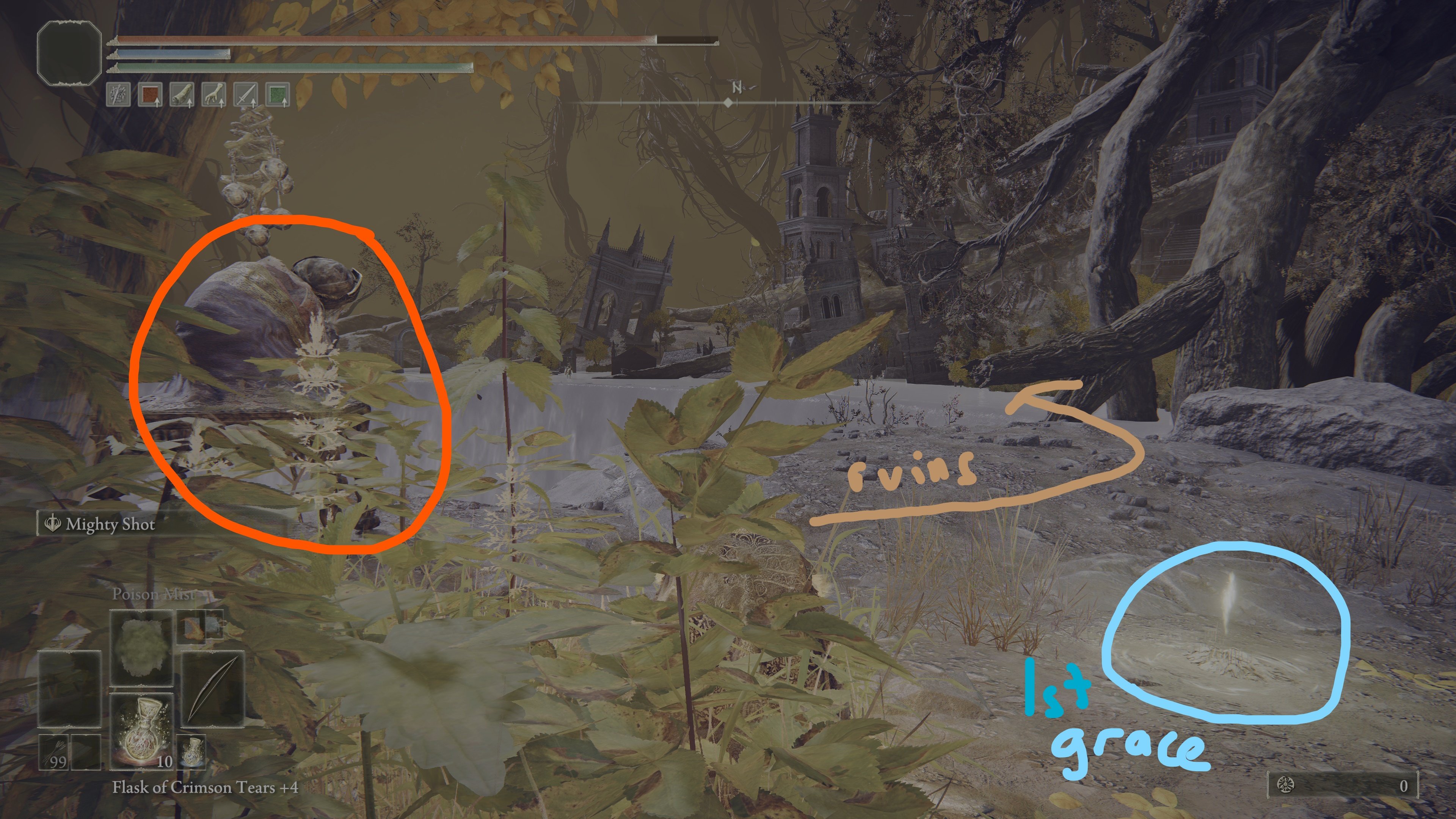 On the way, you'll be able to pick up five Hefty Beast Bones, a Dragonwound Grease, and a Ghost Glovewort (5), and in the gazebo itself, you will find the Map (Deeproot Depths). 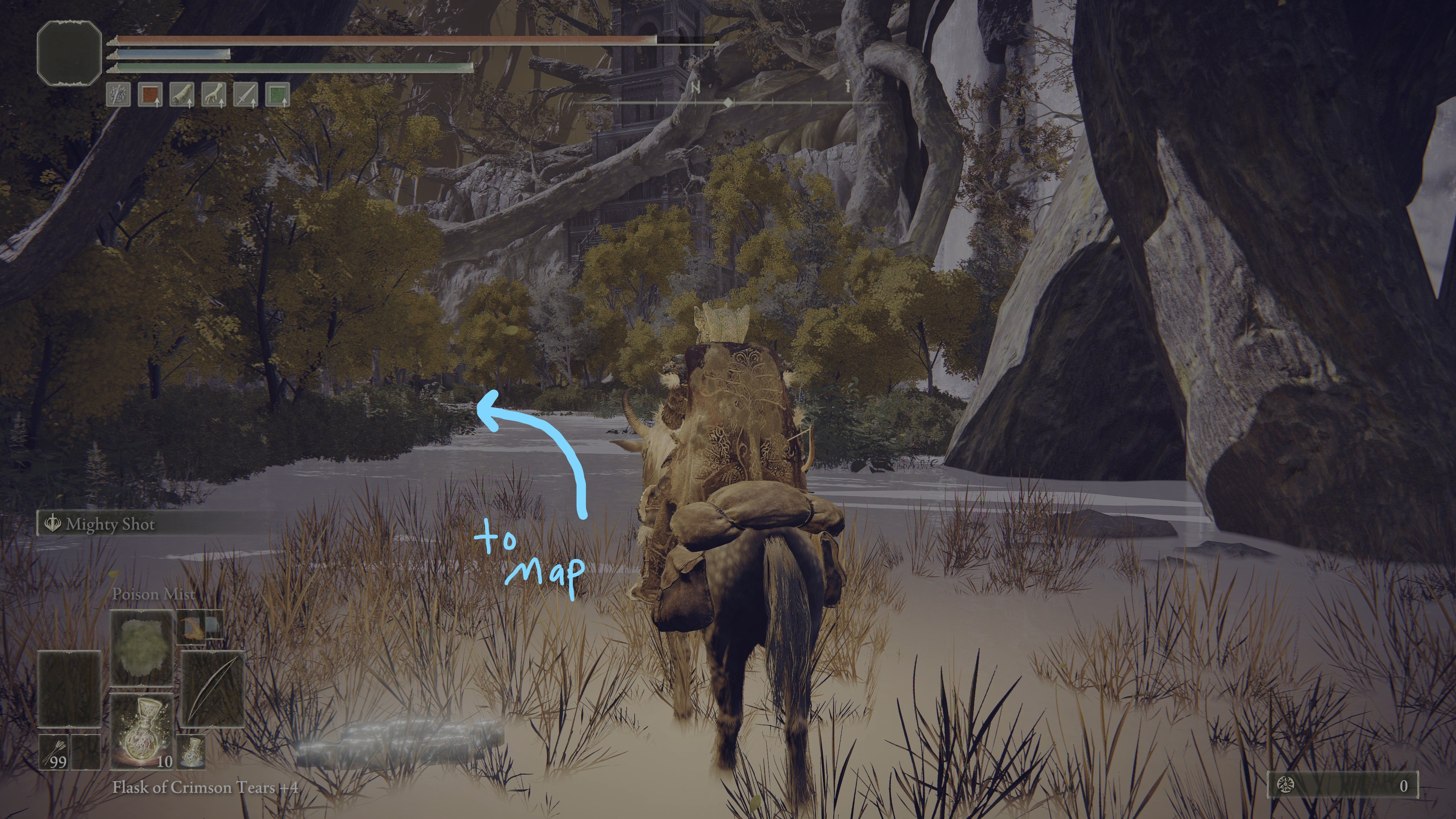 With the map-making navigation easier, head hard east towards a waterfall. There's a cave behind this waterfall and defeating the Runebear inside nets you the Prince of Death's Cyst. Head back to the large ruin and on the way, you can find a Ghost Glovewort (5). Inside the room is an enemy guarding the Ash of War: Vacuum Slice. On the western side of the ruins, you'll find a Teardrop Scarab that drops a Somber Smithing Stone (6).

Head southwest and you'll come across The Nameless City Site of Grace. West of this Site of Grace, in the water and among the ruins, are multiple corpses strewn around. By looting the bodies, you can get yourself two Golden Rune (8), a Golden Rune (9), two Smithing Stone (4), a Clarifying Boluses, five Human Bone Shards, and a Nascent Butterfly. Within this mess of bodies, you can also find a Ghost Glovewort (5). Head to the western edge of the waterfall and you'll find another coffin you can rest in. This coffin takes you to Ainsel River Main.

If you took the coffin, grab the Ainsel River Main Site of Grace and teleport back to The Nameless Eternal City Site of Grace. Before we start exploring again it's recommended to ground the Walking Mausoleum in this area. While it stands, a bunch of Mausoleum Knights and Mausoleum Soldiers will be patrolling a majority of the northern section of Deeproot Depths, making navigation dangerous. Of course, you can choose to defeat them individually instead to gain their unique drops. Head directly north and you'll be able to spot the Walking Mausoleum. If you're having a tough time grounding it, take a look at the notes section below for some tips.

Up here in the northern section, much of the navigation is done by climbing tree roots. There are also several spirit springs around to help you get up to the roofs of buildings or as a shortcut up to the higher cliff ledges. From the Walking Mausoleum, head southwest to find a Somber Smithing Stone (7) in a ruin. Head further southwest and you'll find a Ghost Glovewort (6) by the side of the cliff. If you take the spirit spring up to the building nearby, you can find a Stonesword Key.

Take the nearby tree roots up to the higher cliff and turn westward. You'll find an optional boss, Crucible Knight Siluria, who upon defeat, will drop Siluria's Tree. (An easy way to cheese this boss is to take the spirit spring up from the water, and land on the left-hand side -- immediately crouch, and you can sneak behind the knight to begin applying Poison Mist.) 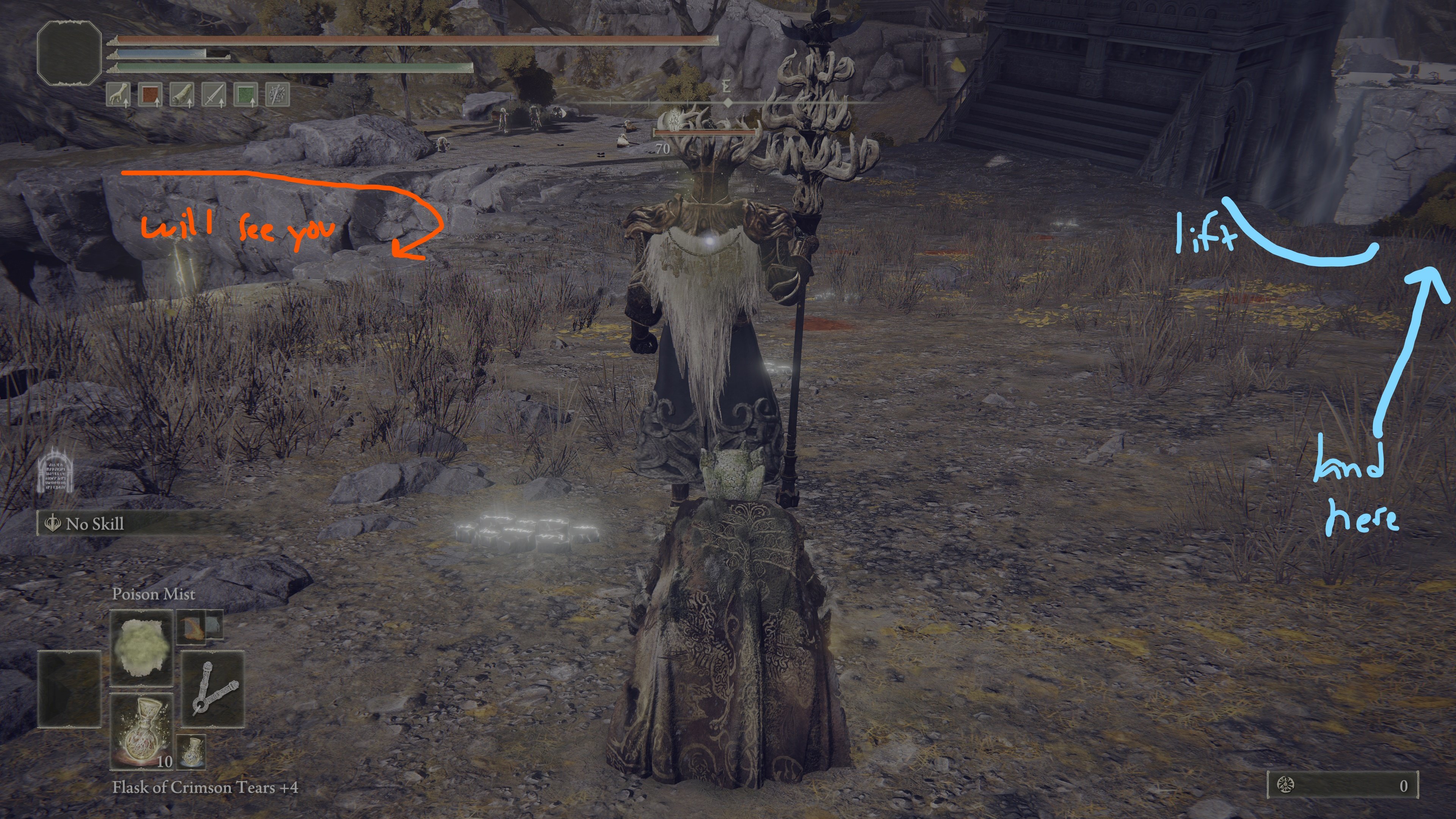 By the base of the tree, they were guarding is a Ghost Glovewort (7), and inside is a chest with the Crucible Tree Set. Head east from where you fought Siluria, still staying on this high ledge, and follow the root branches. At the tip of one branch, you can jump on top of a ruined building with a Somber Smithing Stone (6). Dropping down and heading further east, past the Mausoleum, you can find the Mausoleum Soldier Ashes leaning against a small petrified tree stump.

Head back to where the Walking Mausoleum is and slightly to the south is a cave with a Runebear, as well as several remains with Fan Daggers, a Somber Smithing Stone (7) and a Golden Rune (8). 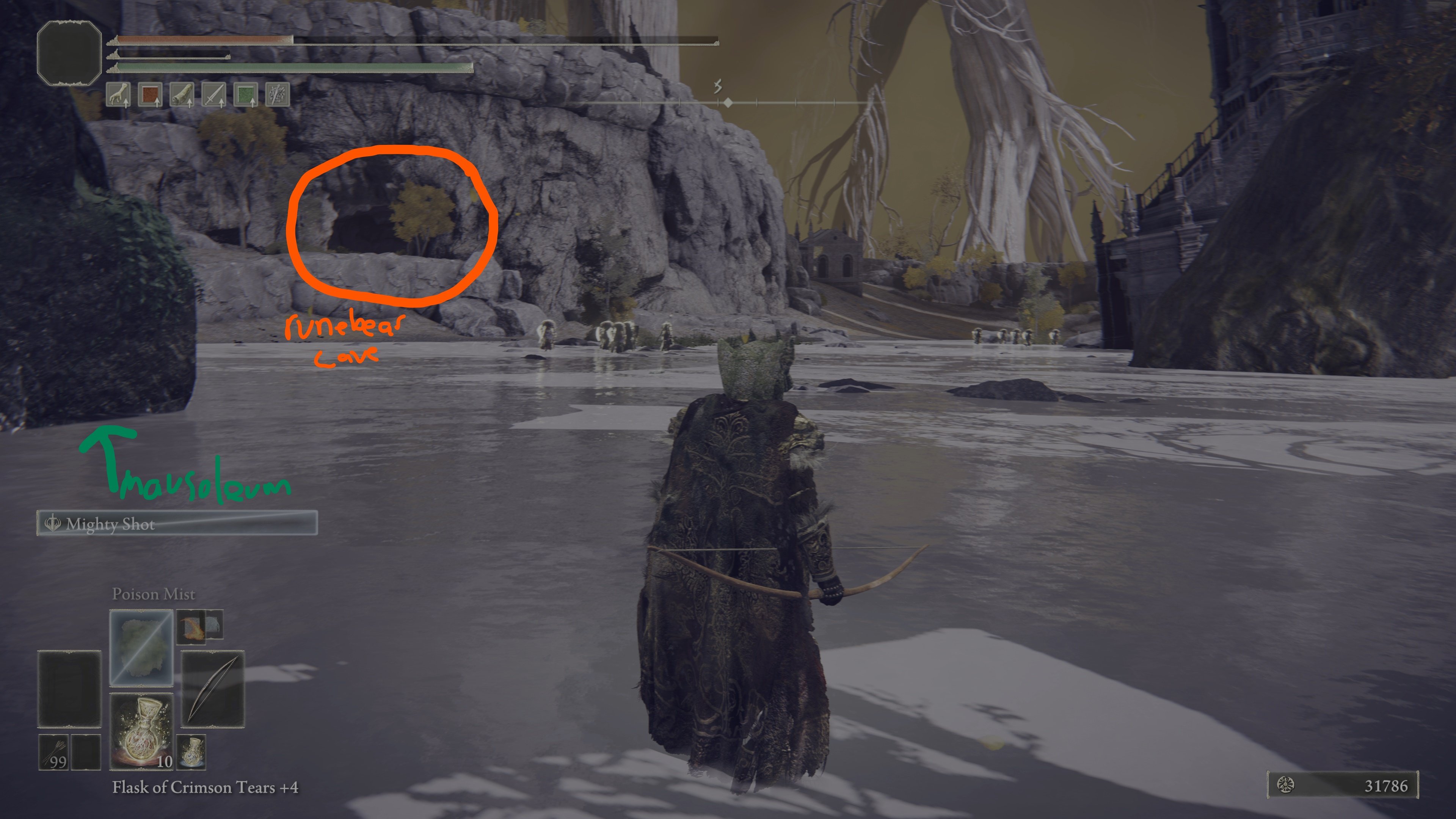 Head back south, up on the hill. Climbing up the roots and buildings here, you'll be able to loot a bunch more smithing stones and golden runes. One building here, in particular, has the Prince of Death's Staff on its roof. Climb the roots here up and east and you'll be able to get to the Across the Roots Site of Grace.

Trace the roots back a little and then follow them to the south of grace site, to the top of waterfall. That area is mostly empty, aside from few ants (including nasty armored one) and Ghost Glovewort (7). In the area there's also a hole leading to runebear cave. Carefully drop into in to get Somber Smithing Stone (7) on a previously unreachable ledge. Remember that runebear sleeps below, so you might want to use some Soft Cotton to not wake it up.

If you're here to progress Fia's questline, up ahead is the area you're looking for. When you head in, you'll be greeted by Fia's Champions. This is a special boss fight that has 3 waves of enemies as opposed to one large and tough enemy. Upon defeating them all, you'll receive Fia's Mist and be able to interact with the Prince of Death's Throne Site of Grace. By speaking to Fia and giving her the Cursemark of Death, you'll be able to face the Lichdragon Fortissax, a dragon boss required for her quest. Defeat it and you'll receive the Remembrance of the Lichdragon. What you receive for completing this part of the quest and what happens afterward can be found on Fia's NPC page. Portal near Fia leads to Leyndell Capital near East Capital Rampart grace site.

The area above the Great Waterfall Crest grace site can only be reached through the Subterranean Shunning-Grounds. After killing Mohg, the Omen there's a hidden path behind his reward chest. Follow the dungeon down until you reach the Frenzied Flame Proscription grace site. Roll into a southern wall to reveal a hidden path. Follow that path and after another obvious hidden wall, you'll reach Deeproot Depths again.

The ruined city within the perimeter of the Deeproot Depths shares it's architectural features with the twin Eternal Cities, Nokron and Noxstella. Given it is in ruins, it is likely the Eternal City destroyed by Astel, Naturalborn of the Void.

Interestingly, the ruins of the city line up perfectly with the giant chasm within in the Leyndel city walls in the north-western part of the city, just beyond the non-functional main gate of the city. Directly adjacent to this chasm is the section of Leyndel where the Lower Capital Church is located. Examining the architecture of this part of the city reveals that it is almost identical to that of Ordina, Liturgical Town and Sellia, Town of Sorcery, the latter of which is build directly on top of the Eternal City of Nokron and features one of their distinctive chair-monuments, guarded by a Nox Priestess and a Nox Monk. All of this hints at the possibility that this nameless Eternal City was once a part of Leyndel itself, or that Leyndel was an off-shoot of the Eternal City, which survived the destruction by Astel and became the Capital of the Golden Order Era.