The location of this secret cave is revealed by Note: Hidden Cave.

Entrace found behind an Illusory Wall. To reach the entrance, start at the Church of the Plague site of grace and head north up the hill and straight under the wooden arch. Look to the North-East for a small graveyard with a single sorcerer enemy wielding a staff and a club. Behind the main headstone, along the cliffside, there's a secret door you can reveal by rolling or attacking it. [Elden Ring Map Link] 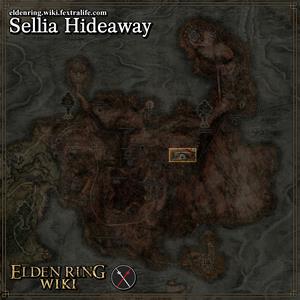 All NPCs and Merchants in Sellia Hideaway

Upon entering the cave past the site of grace, you will encounter a Glintstone Miner. Past the Golden Rune (3) slightly further in, there is another illusory wall you need to roll through. Another Glintstone Miner and illusory wall await you. Past this, there is a large cave with massive purple crystals. Head right to find another miner, then go across the crystals and to the left towards the next miner guarding a Golden Rune (5). Go back by jumping above the crystals to the right, then go across the large crystal again, this time heading right. Turn right again and drop down onto another shorter crystal, the jump onto a longer one and drop down into the pit. You should be able to see the magic barrier associated to Sellen's quest from here. If you have the key, go through and talk to Lusat who will give you Stars of Ruin. Turn around and walk over the crystal where you encounter a Revenant. Loot the Stimulating Boluses, Golden Rune (5), and Lost Ashes of War. Turn around and towards the Silver Fireflies, along the path back upwards is a Somber Smithing Stone (4). When you drop down from the crystal at the end, there will be three Crystal Snails waiting for you. Turn left, where you will encounter two sorcerer miners, one of them has more health and a charging attack. Loot the Glowstone x4, then jump across or onto the crystal below, then head into the corridor on the right, passing a Stake of Marika (where you can respawn at should you die).

You'll enter into quite a large crystal formation cave. Hug the right wall, climbing up and over the rocks and rubble. You'll pass on your left shoulder, two (2) very large crystal shards growing from the floor with the third one at a gentle angle. Walk onto this third massive crystal shard and continue walking until you're a few feet away from the tip. 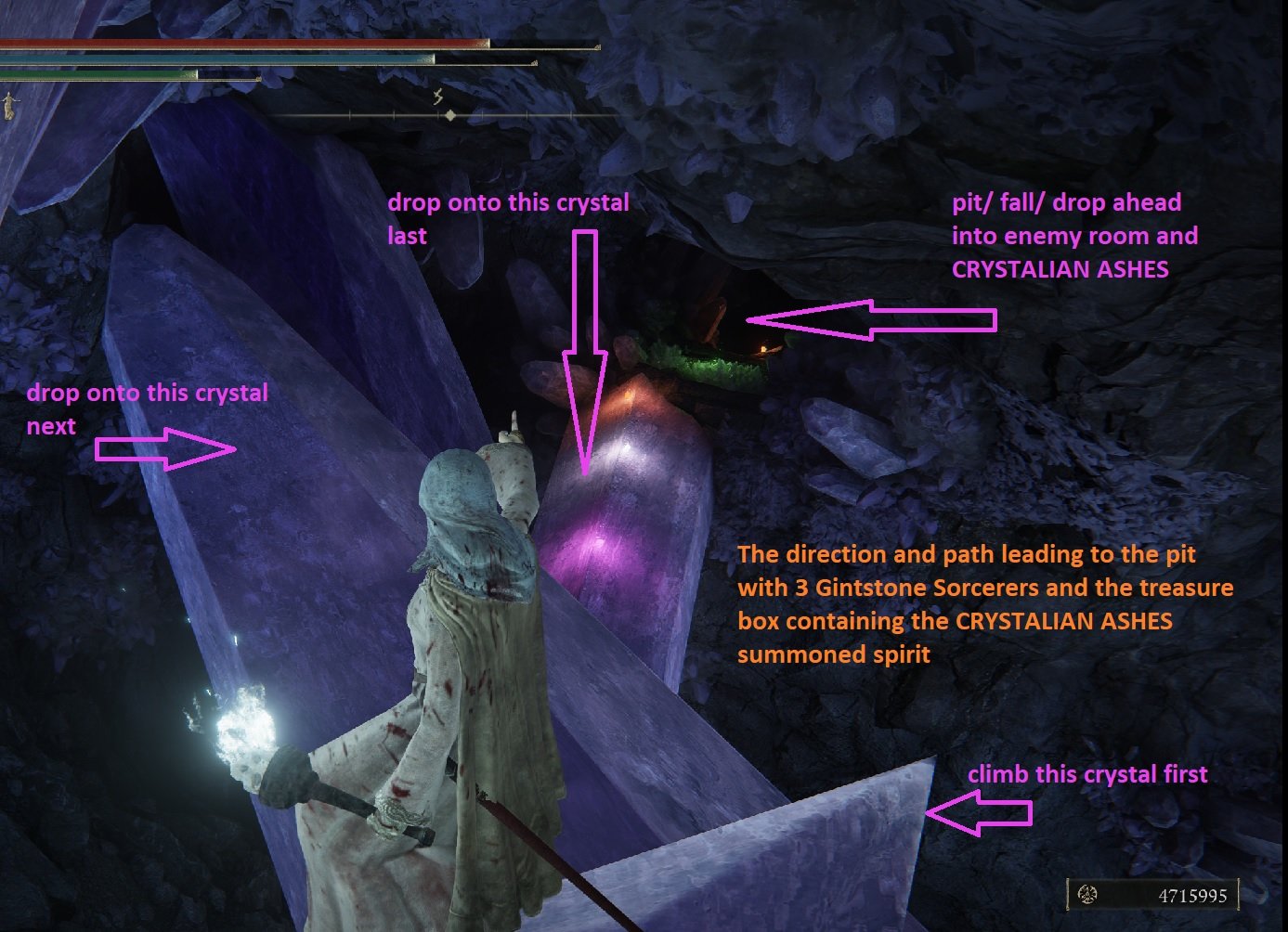 Walk off to your right, jump onto a little crystal and then floor to face a Preserving Boluse and an illusory wall leading to a chest containing Crystal Spear. Head back and this time, walk off to your left, which will make a very short drop onto another crystal (short drop to the south). From here, head south and take another very short drop onto yet another crystal shard. Follow this up and until you're on solid ground. There is a pit with some light barely noticeable at the bottom, a campfire, and a room full of several Glintstone Sorcerers (a couple will make use of shields and engage you in melee while the third will casts spells at you). Clear this room and you can claim the Crystalian Ashes, among a few other crafting mats. There is only one exit to take, so head out, make a small drop, and you'll come across a single miner. Once dealt with, you'll be at another short drop with two choices: left, going southwest or right, going northeast. You'll want to turn right, after you drop, heading in a northeast direction. This will take back into the room you did your crystal shard climbing/ dropping to reach the Crystalian Ash summons. Make your way back into the large crystal shard room, dealing with Crystal Snails and you can claim Crystal Dart x10. Nothing more to note in here so, head back into the tunnel, moving southwest towards the fog wall/ boss. Before the boss you will be ambushed by four more snails. Prepare for the boss accordingly: Three (3) Putrid Crystalians who inflict Scarlet Rot on hit. There is a mage, one with a ringblade, and the last one with a lance. Per usual with Crystalians, blunt weapons will crack their shell fast, enabling frontal/ rear backstab and for subsequent better HP damage on them. Your reward is the spell: Crystal Torrent.

To get to Master Lusat, you'll first need to have talked to Sorceress Sellen and progressed the questline enough to where you will be asked to search for Master Lusat on her behalf (refer to her questline page for more information).

From the room with the overlapping crystals, fall down to the ground and fight the Royal Revenant. In the northwest side of the room, you'll find two small steps leading to a small cavern. 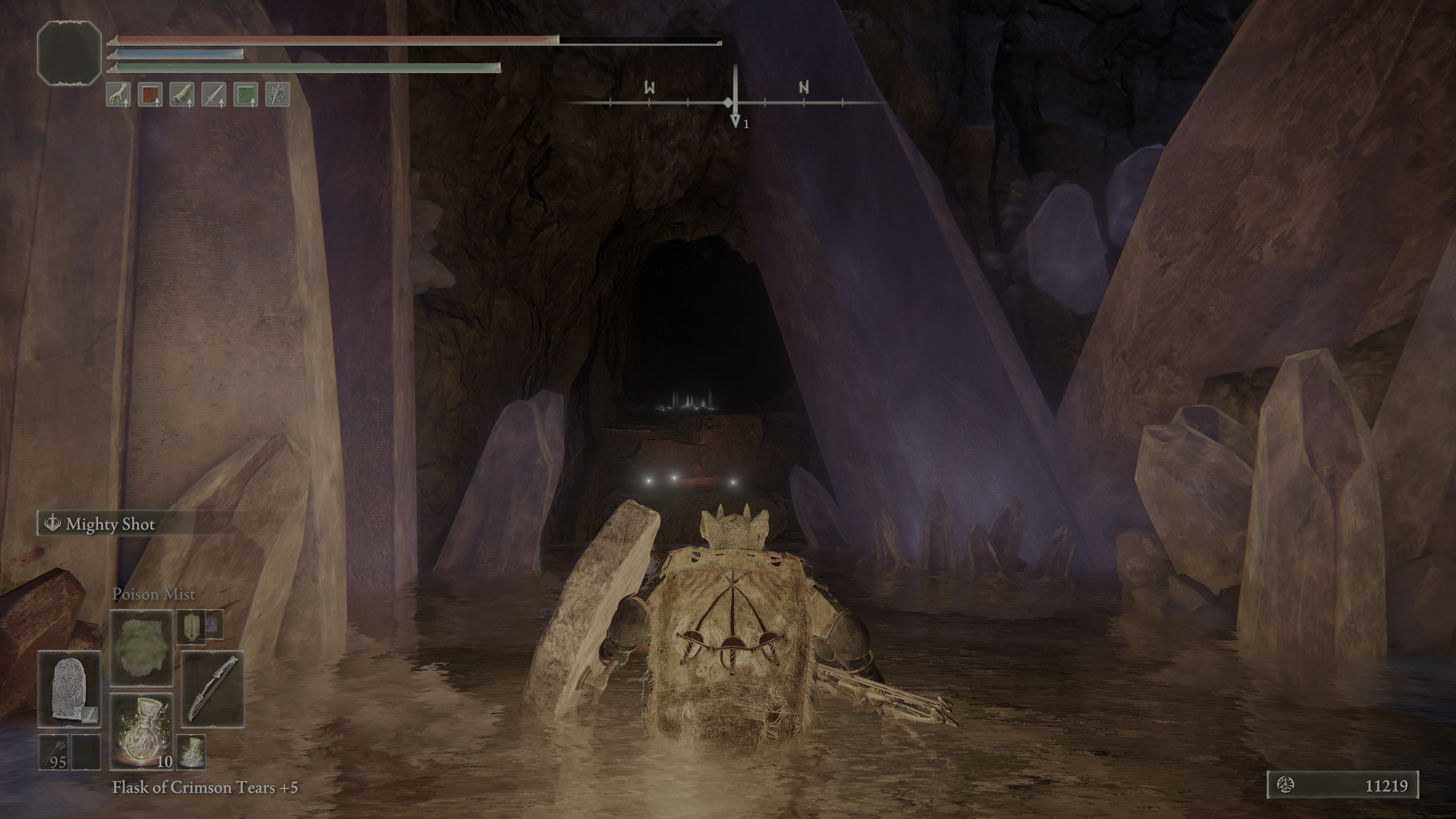 Follow through the cavern, and eventually you'll find yourself walking atop a crystal, with another ledge and a Crystal miner off in the distance. Hop to the other ledge, then head to the leftmost side of the platform. 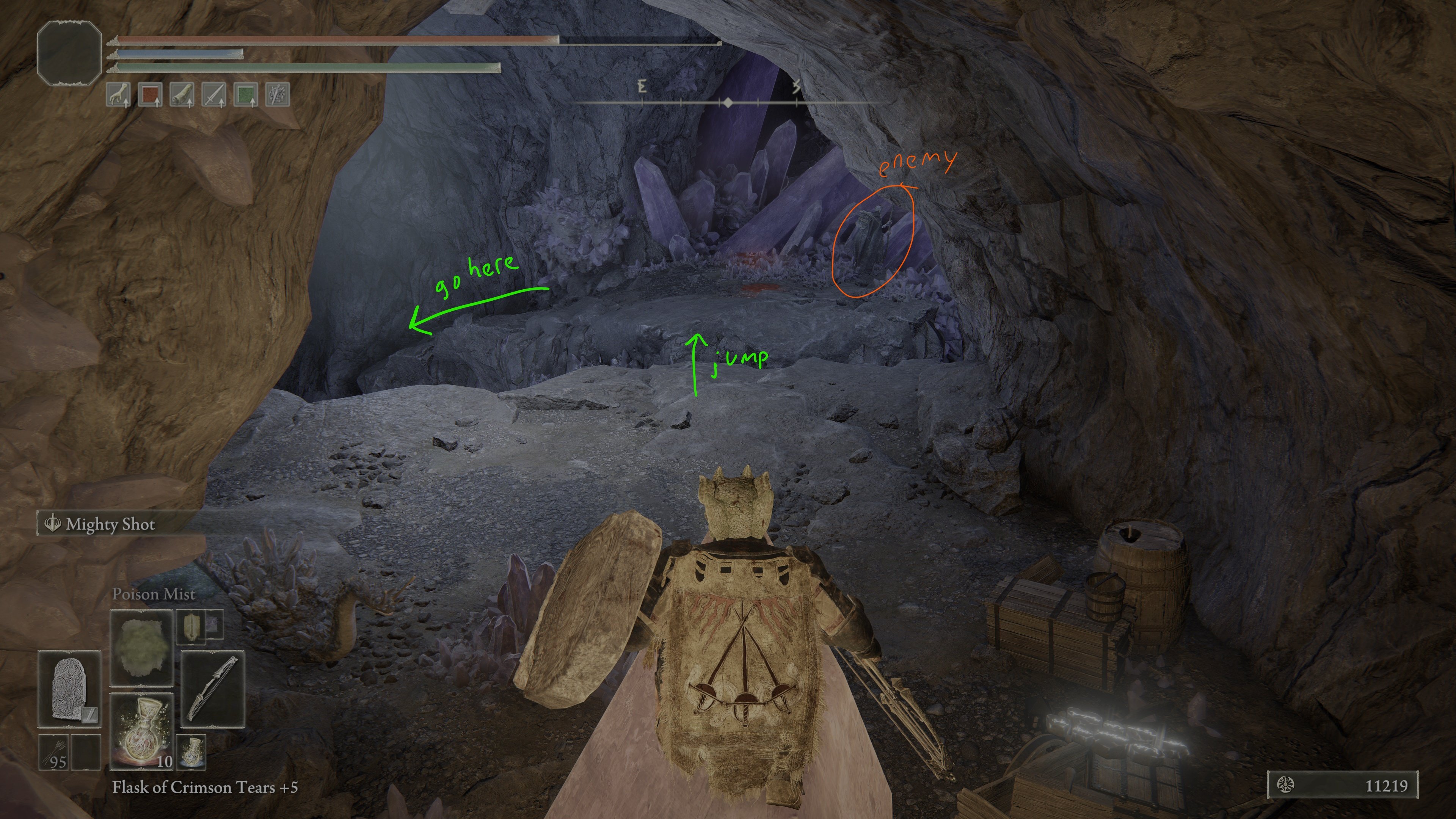 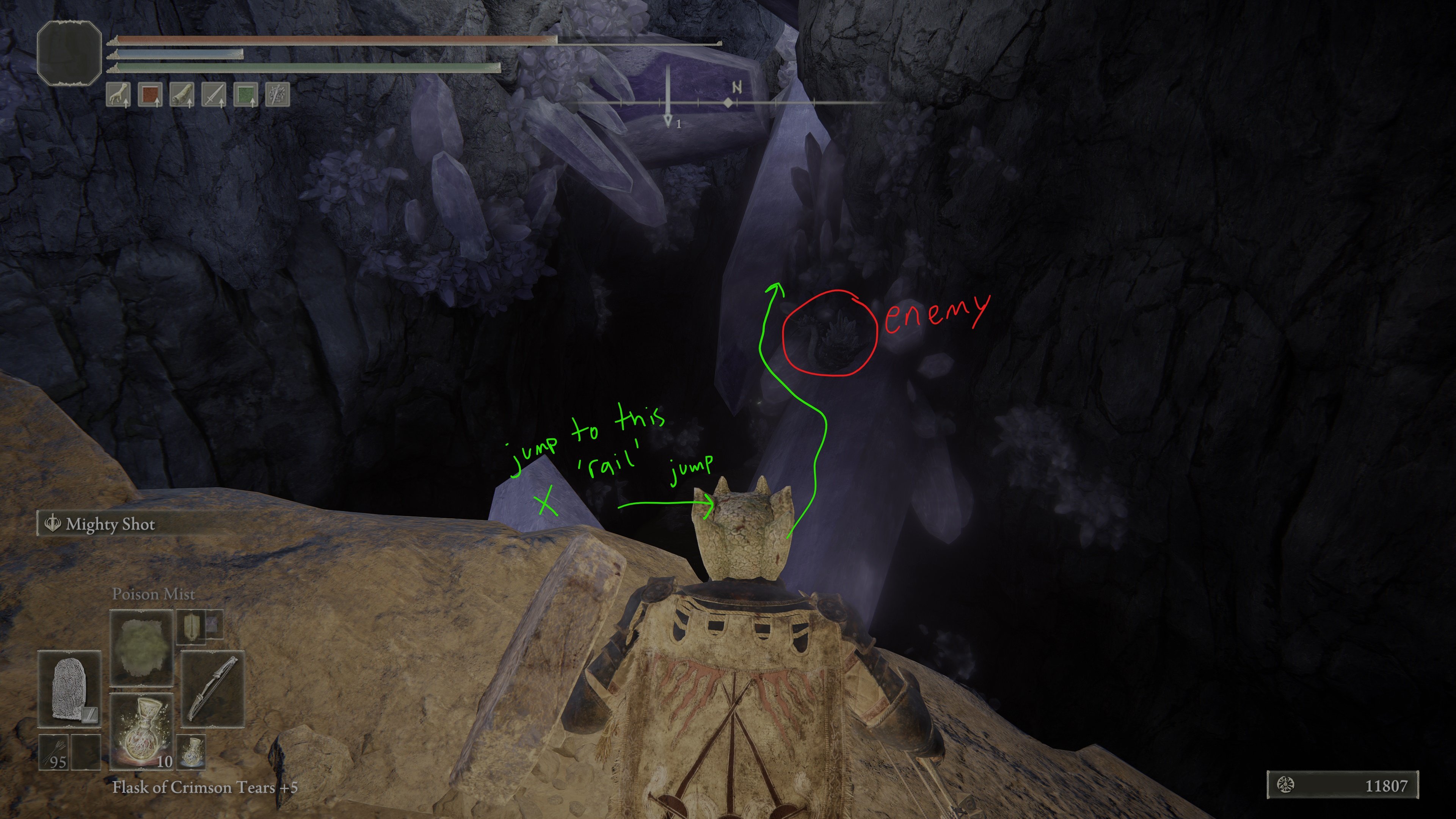 As you walk towards to the snail, you'll notice on the bottom left corner there is a gate guarded by Sorcery. That is the ultimate location you are trying to get to. 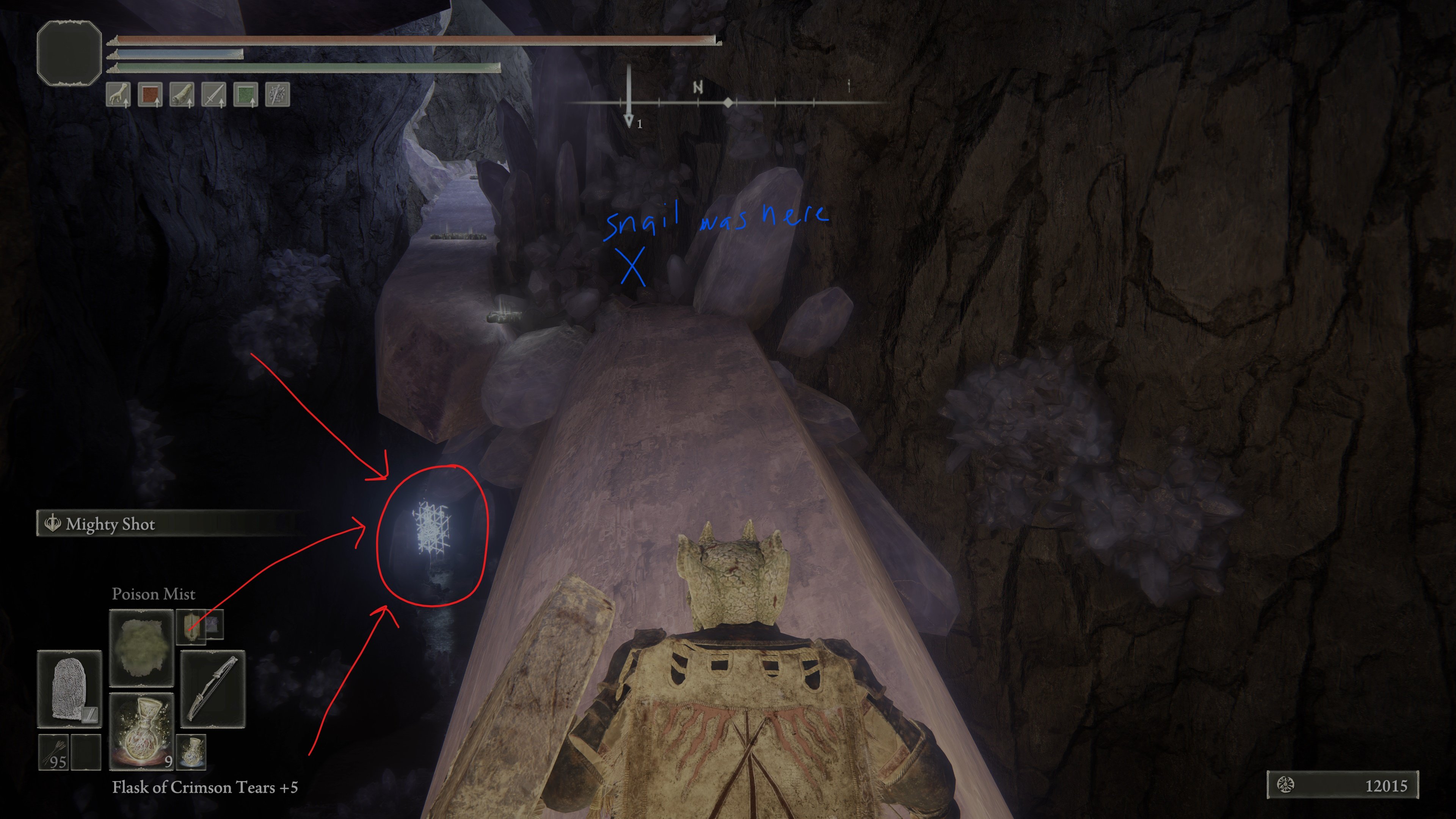 Once you get to around where the snail you killed was, it is safe to drop down, and begin your approach to the door -- but note that it is guarded by a Glinstone Sorcerer. 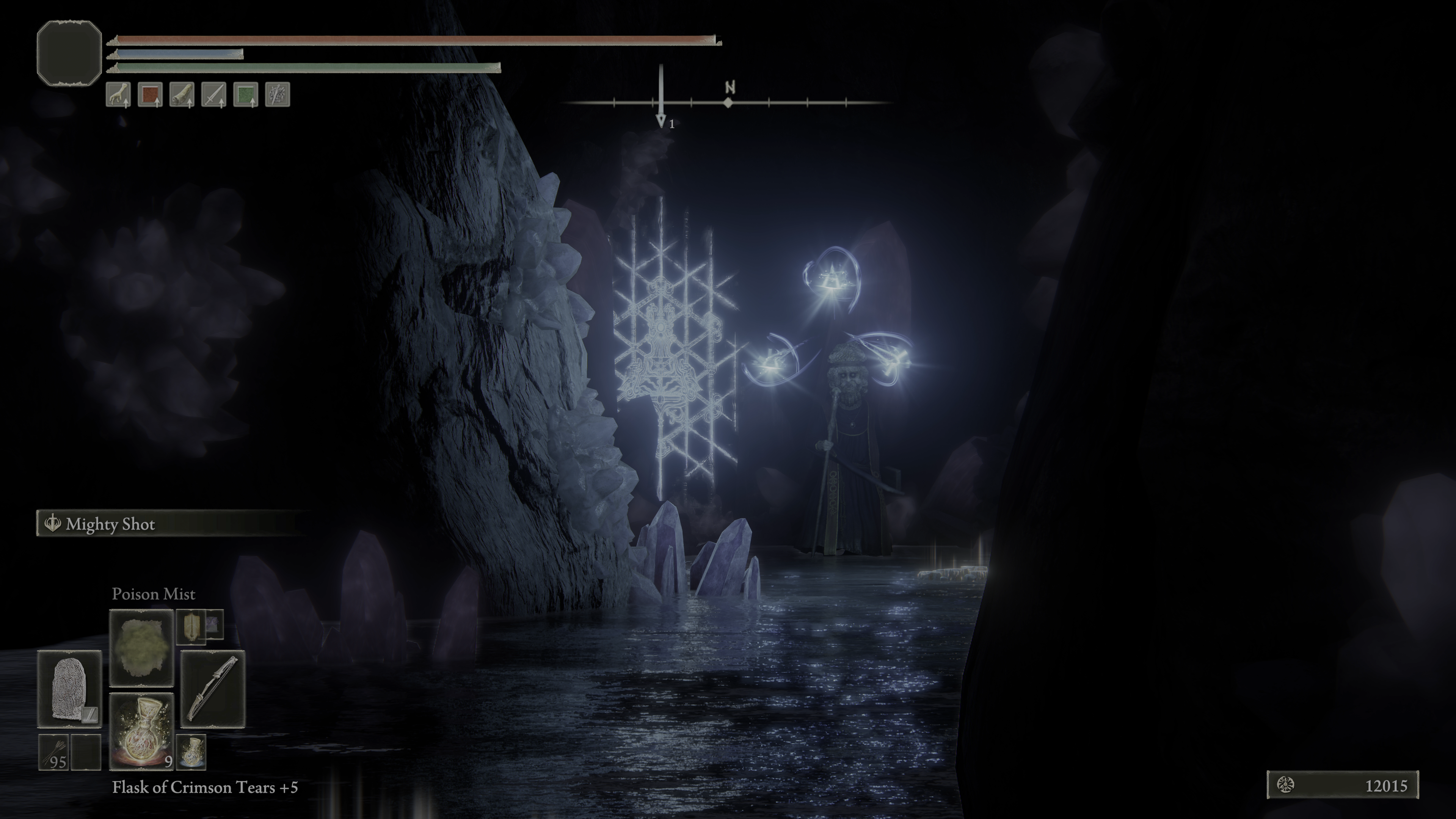 Lastly, walk up to the door and examine it, and the door will open, revealing a short cave. 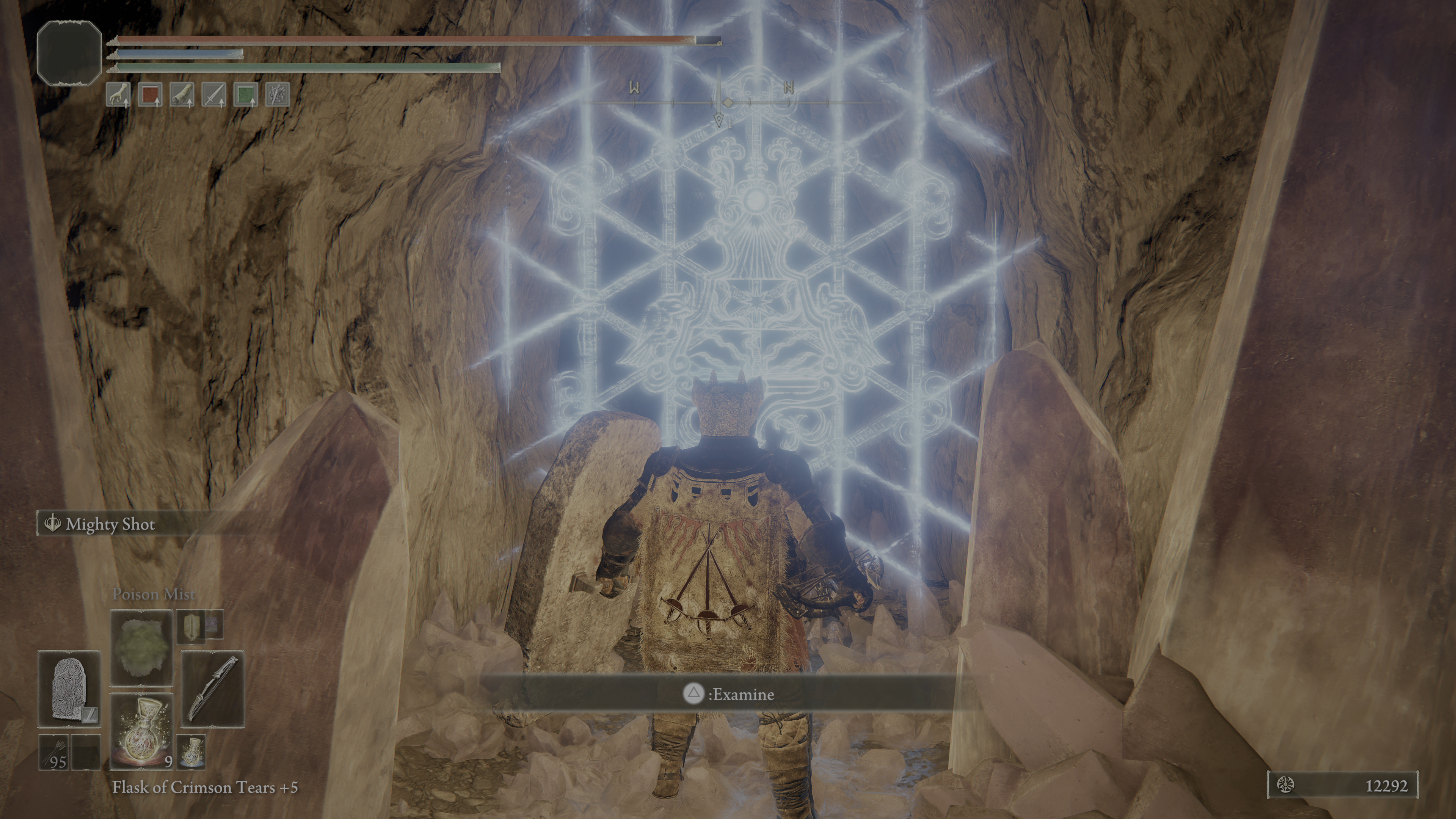 Proceed through the end of the cave, and Master Lusat will be there waiting for you. 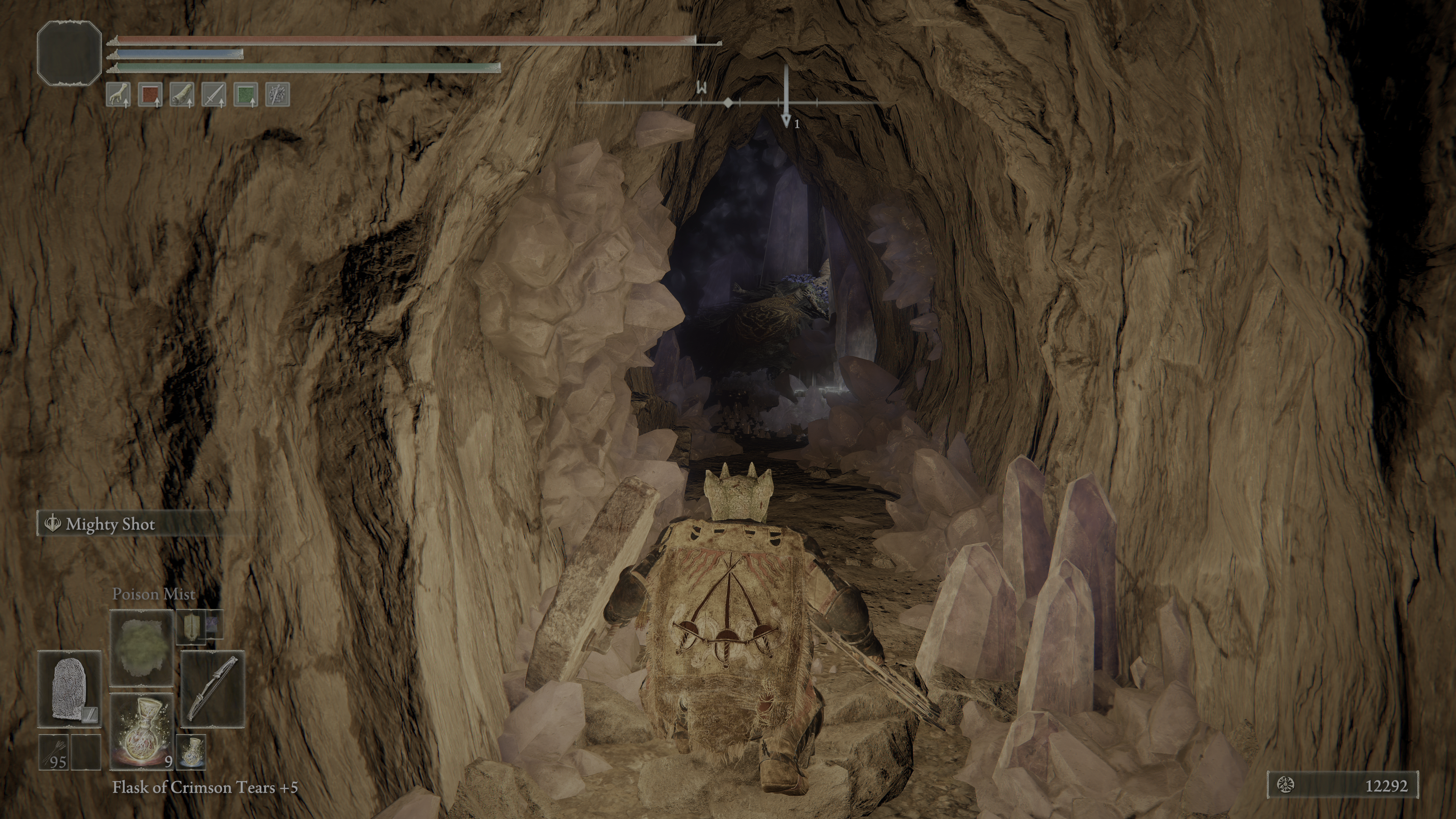 Approach him, and interact to Talk with him. 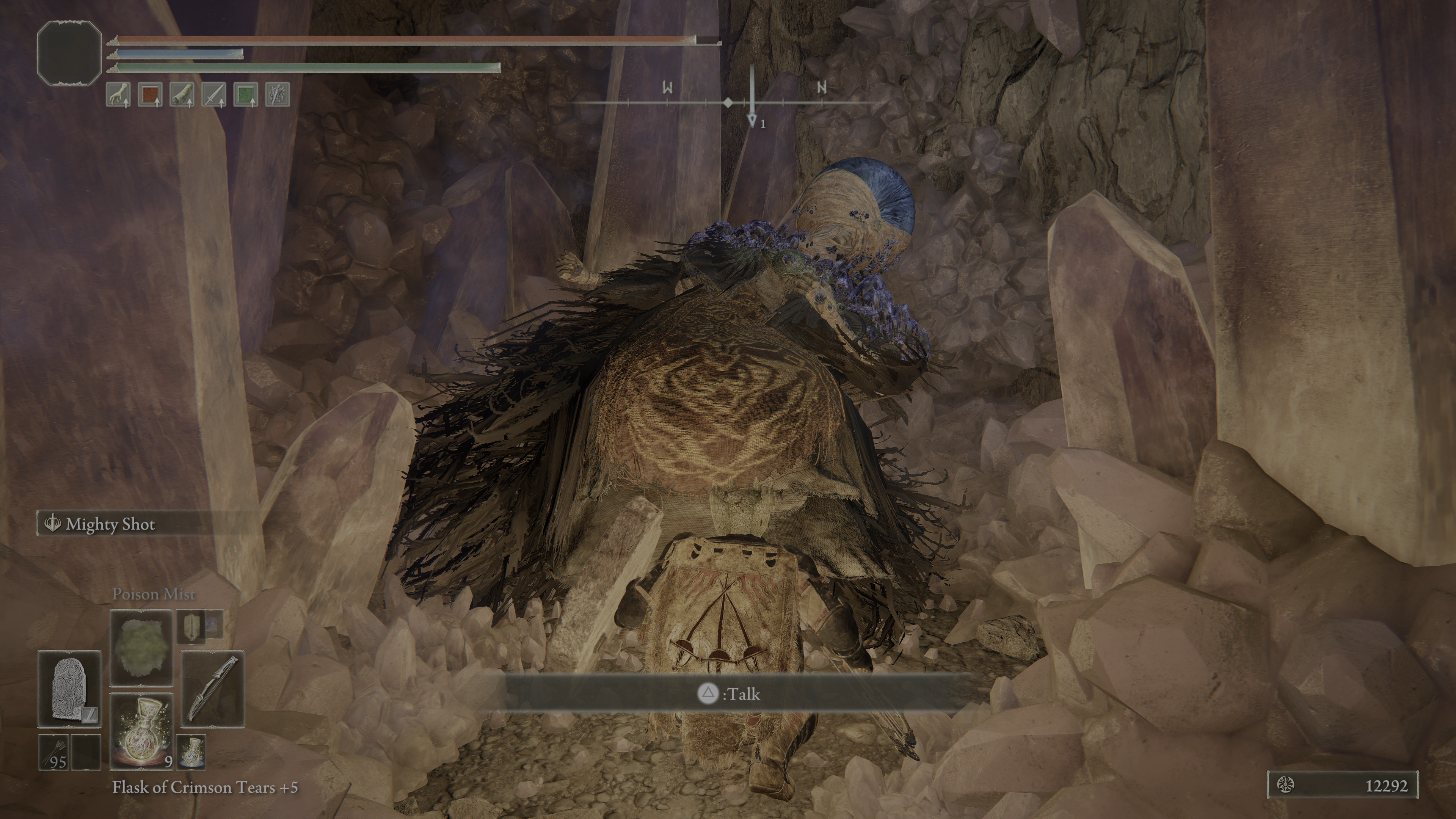 After "talking" with him (he won't say anything), you'll receive Stars of Ruin. 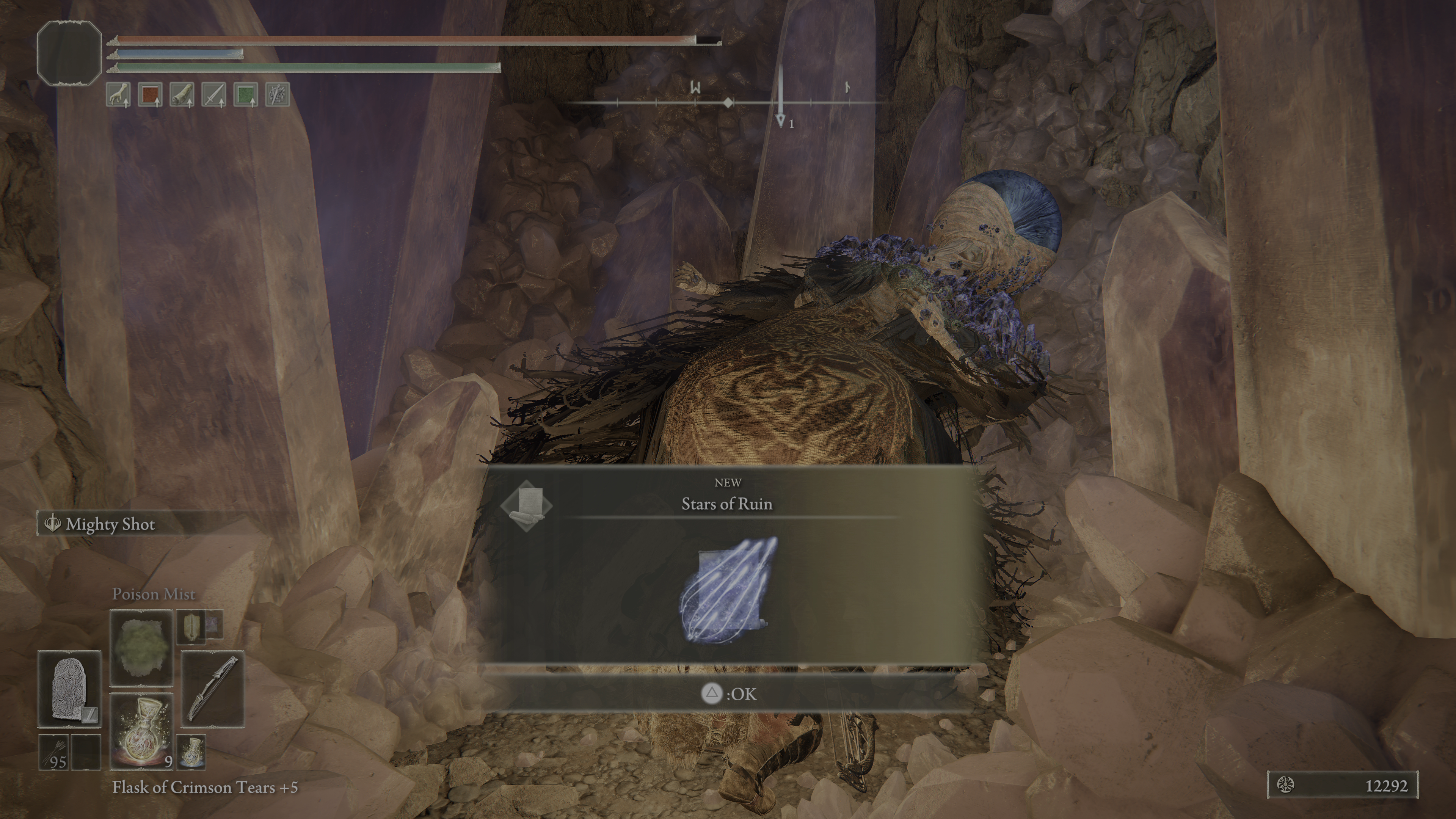 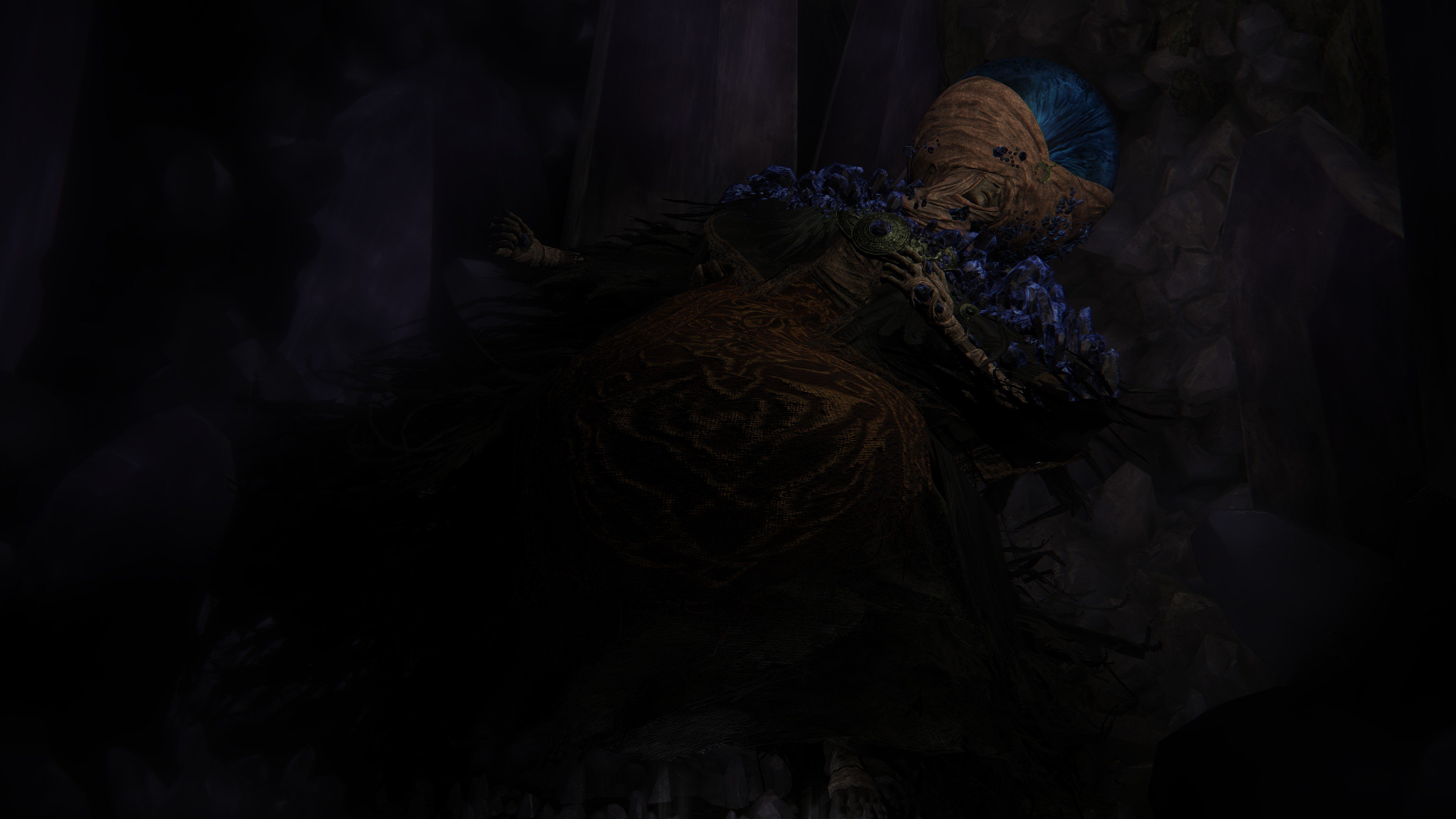