Dragonbarrow Cave is found on the north-east portion of Dragonbarrow. See it on the Elden Ring Map here. 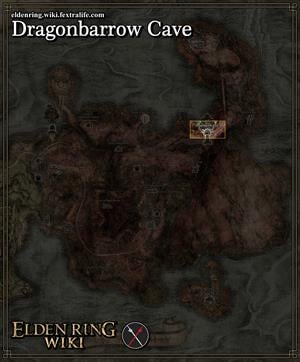 All NPCs and Merchants in Dragonbarrow Cave

From the Site of Grace, following the narrow tunnels ahead will lead you to the den of a Lesser Runebear. This beast can be difficult to deal with especially with the very tight space you are allotted. Consider sneaking past the bear when it has its back turned, or killing it with ranged attacks or status effect ammunition from the safety of the narrow passageway you enter through -- though note that it does respawn. If you do manage to kill it or sneak there, there is a Warming Stone and a Golden Rune (12) on the corpses in the corner. Head to the south and follow the tunnels to a cavern with a Deer and several Springhares in it. You can find a Bull-Goat's Talisman on a corpse here.

Head back to the bear's den and look for a tunnel in the north side. This leads to a pit with a couple of ledges you can drop down to. Before dropping down all the way, you can use ranged attacks to take the Wolves at the bottom level out. There is a Golden Rune (8) on the corpse in the middle of the wolves and 3x Beast Blood on another corpse nearby.

Go through the tunnels east, heading south to find another pit to drop down from. This leads to the boss encounter of this small dungeon.

This battle is against two Beastmen of Farum Azula. The one with the Throwing Knife will remain at a distance and shouldn't prove too troublesome, but try to take him out as soon as possible. Be warned that his knives have decent tracking and you should consider bringing a shield along to block them instead of dodging. This beastman is particularly easy to kill with a barrage of magic.

The Beastman with the Greatsword isn't much different from previous Beastman encounters, but he is extremely powerful and can one-shot you if you are underleveled. Consider using a tanky summon to distract this Beastman while you are working on the other. Watch out for his large, sweeping strikes and long dashes.

Defeating the Beastman duo awards the Flamedrake Talisman +2 variant as well as 65,000 Runes.