See the location of Cliffbottom Catacombs on our interactive map by clicking on [Map link]. 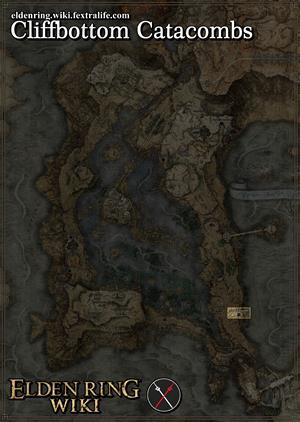 All NPCs and Merchants in Cliffbottom Catacombs

Cliffbottom Catacombs is a catacombs that is filled with imps and omens. Walk carefully to not wake or alert the omens or get jumped on by the imps. The catacombs also have multiple buttons on the floor that trigger traps that shoot projectiles at the player; you can use them to your advantage by triggering them to hit enemies. The imps in this dungeon will throw a blue pot explosion at players.

Leaving the Site of Grace going down the stairs you will see the elevator room, step on the button to lower yourself down. A lever is present at the top and bottom of the shaft for you to call the elevator if it is not there. The first room after the elevator has 2 imps, one on the wall ahead and one standing on the right of the entrance. Past this room is the pair of locked doors flanked by 2 statues, the door will be unlocked by a lever found deep in the catacombs.

Stepping into the rest of the catacombs you will walk into a square room with a staircase, the stairs lead downwards going over a pit where an omen can be seen sitting. Going forward into the next tunnel be careful of both the floor trap as well as the imp in the ceiling, there is another imp on the corner ahead that will jump you so be prepared for it.

Through this tunnel you enter into a room with a high ceiling, and some stairs leading up on the left side, straight ahead there is a sleeping ogre between the pillars, kill it to get to the grave glovewort behind it. Up the stairs is a sealed door and an imp statue but also another omen, this time awake and patrolling, above them are a pair of imps ready to throw grenades at you if you catch their attention. You could either rush the imps by going up the stairs and ignoring the omen or kite the omen down the stairs to separate the imps and the omen to make for an easier fight.  You can also stealth up the side of the stairs and through the door while the omen is walking the other direction, the imps will not notice.

The room sealed by the Imp statue will require a Stonesword Key to open, inside you will find 1 imp enemy and the Nox Mirrorhelm. Go up the stairs and carefully deal with the two imps in this room, a floor trap is placed right at the entrance to the room which can be used to shoot projectiles into one of the imps. Following the path out of this room you will find yourself in the space above the initial set of stairs and entrance. There are multiple imps in this area and in the room on the left you can find 3 imps, the body there holds the scythe for you to loot.

To proceed to the lever you have to drop down into the room under the first set of stairs leading from the locked doors. This part of the catacombs has multiple omens roaming the halls so tread carefully. Moving around the tunnels here you can find remains with loot on them, one of which is the Prattling Pate "Wonderful".

From the room you dropped down into go east to advance, there you will find a single omen blocking the way forward, kill them to proceed. At the end of these tunnels is a ladder, climb it to find a room with a carpet and some bookshelves. On the left you will find an omen looking at a tomb in front of a stone statue, going right will lead you to the lever and the way back to the start. On the tomb is the Page Ashes.

This fight is against a variant version of the Erdtree Burial Watchdog that uses a staff, spells and has three heads that will do a three-headed fire-breathing attack. The fight is against just the boss without any additional enemies. The boss still uses the same movement pattern as the normal Erdtree Burial Watchdog, in their seated form floating up and towards the player before stomping down and walking towards the player to slam and slamming that down while in their standing form. While seated the Erdtree Burial Watchdog will also cast spells at players, breathing flames at them or casting seeking Glintstone Sorceries. Defeating this boss will reward you with Kaiden Sellsword Ashes and 3,200 Runes.